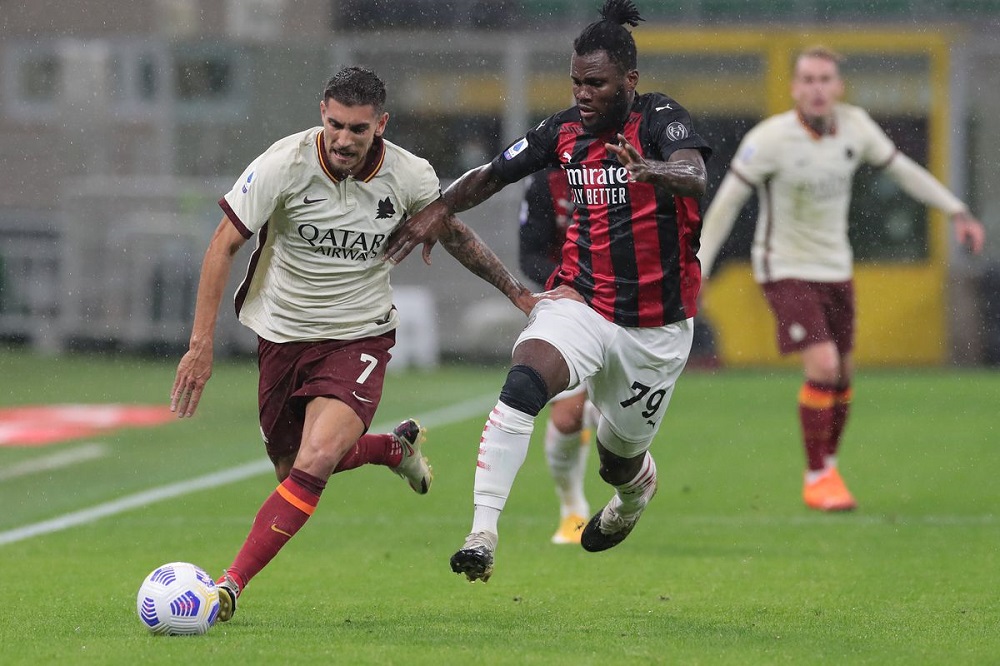 A still of Pellegrini (left) and Kessie (right) during the match between AC Milan and AS Roma.

Serie A is the Italian league where top clubs like Juventus, Napoli, Inter Milan, AC Milan, Atalanta, Roma, and many others compete to win the Italian title. Juventus are the current champions of the league. However, this year after playing 5 matches they are at the 5th position in the points table which is not that bad but for a team like Juventus, it is not satisfactory. This season the underrated clubs like Sassuolo and Sampdoria are doing a great job.

AC Milan, after the arrival of the king Zlatan Ibrahimovic is doing great and managed to win 4/4 matches and are the current table toppers. They also won the Milan Derby against Inter Milan last week. AC Milan’s performance this season has been fantastic altogether. After winning against Inter, now their next opponent was AS Roma. Even though AS Roma has a great number of talented players, their performance this season has been quite disappointing. They stand in the 9th position right now and are looking to earn more and more points. Both teams competed against each other on 26th October 2020 and it was one of the best Serie A matches of this season yet.

AC Milan is quite strong at home but Roma was not be taken lightly. Roma is a team that can handle situations well. Donnarumma was out of the squad for Milan after testing positive for coronavirus. Roma made many changes in their team for this match. The match kicked off and just 2 minutes into the game, Zlatan made it 1-0 for Milan. This was the perfect start for Milan and a poor for Roma.

However, just 12 minutes later, Roma’s Edin Dzeko scored the equalizer after a horrible mistake from Tatarusanu who replaced Donnarumma and made his first league appearance. After many close calls, the score at half time was 1-1. Now, both the teams were looking to score the tiebreaker to earn the three points.

AC Milan once again got the perfect start in the second half as they scored in the 47th minute. Alexis Saelemaekers scored the goal to make it 2-1. Although Roma again scored the equalizer in the 71st minute from a spot-kick after Pedro was fouled inside the box, 8 minutes later even AC Milan won a penalty when Calhanoglu went down in the penalty box. The penalty was converted by none other than Zlatan.

Now, Roma was under immense pressure as they had to score at least one goal so that they could earn at least a point. So, that is exactly what they did. An 84th-minute goal from Marash Kumbulla was the last goal of the game as it ended in a draw and also broke Milan’s winning streak. Even though the match ended in a tie, AC Milan is still the table toppers.