After several months of being away from WWE television, Aleister Black’s return was teased this week on WWE Friday Night SmackDown.

Black talked about the “monsters” (the people) looking at the screen and said that the people have transformed their own children into monsters and the people should be scorched from the Earth.

This vignette appears to confirm that Black will be back a heel and it’s a reversal from what Vince McMahon thought about him just a few months ago. Black was one of the guys that was being pushed on Raw last year. In fact, there was talk of having him beat Brock Lesnar.

Black’s push was halted when Paul Heyman was relieved of his duties as the Executive Director of Raw. Black was eventually traded to SmackDown but he was quickly put on the shelf around the time when his real-life wife Thea Trinidad (Zelina Vega) was released by the company.

The vignette shown this week appears to be an attempt to repackage him. Check out the vignette by clicking below.

"I want you to know the truth." – @WWEAleister #SmackDown pic.twitter.com/zOLAVw3Lz3 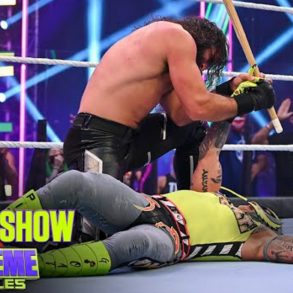