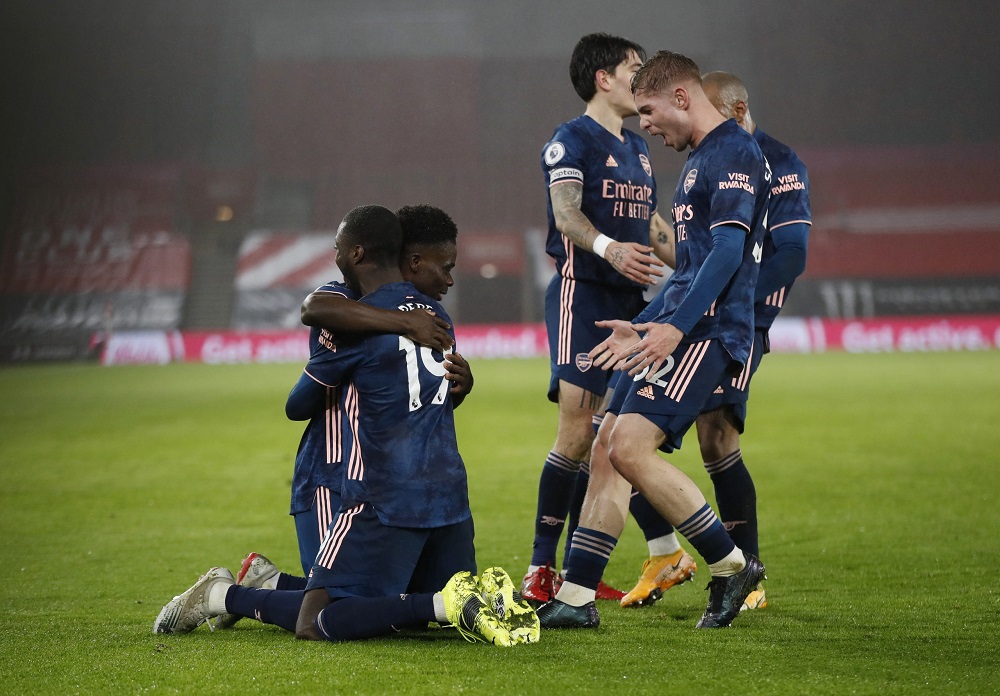 Arsenal beat Southampton to climb back to the Top 9 in the Premier League points table.

Southampton invited Arsenal to play their 20th fixture of the Premier League this season at the St. Mary’s Stadium. Southampton came into the clash having failed to win five of their last six Premier League fixtures. Their last victory however came at home against Liverpool. Their win against the visitors helped them climb to the 7th position in the points table. Having endured an inconsistent start to the campaign, Arsenal’s form had picked up in the recent weeks. The Gunners had lost just one of their last six top-flight matches which came against Everton at Goodison Park. Since then, Mikel Arteta’s side had conceded just one goal, keeping a clean sheet in each of their previous four matches. A win in this match would seek the visitors into the top half and above the Saints.

The match began as Southampton took an early lead. After Holding put the ball behind for a corner in the right, Ward-Prowse pulled the set piece back to the edge of the box for Armstrong. On the half volley, the Scottish midfielder took a first-time shot into the top right corner of the box. Leno got a hand to it but could not keep it out. Consequently, the score was 1-0 in the 3rd minute of the game itself.

On the other end, Saka did well to drive down the right flank and won a corner off Stephens. The delivery met Holding in the middle of the box but his header fizzed beyond the far post. Consequently, Arsenal leveled quickly showing signs of an immediate comeback. The Gunners won the ball back high up the park and partly laid it off to his left for Xhaka. The midfielder picked his head up, slid a pass beyond the host’s defense and Pepe fired a shot from the center of the area into the bottom right corner.

Then, Arsenal almost made it 2-1 in the 14th minute of the game. They advanced down the right, with Saka creating space to float the ball into a dangerous area. The looping cross fell to Cedric on the edge of the box but his ambitious right-footed volley just went wide of the far post. McCarthy was worried by that effort but was somehow relieved after it didn’t make it on target.

The visitors got the lead in the 39th minute of the game following a long pass. The ball dropped to Xhaka on the halfway line and he laid it off to Lacazette. The Frenchman was alert to Saka’s run in behind and played a first time through ball on the turn into his path. The 19-year old showed great pace to beat an onrushing McCarthy to the ball as he went around the goalkeeper and slotted it into the empty net. With that, the first half ended as the score was 2-1 in Arsenal’s favor.

The second half began as Arsenal continued their dominance of the game right from the beginning. Once again, the Gunners won the ball high up the pitch through Xhaka. Cedric slid Smith Rowe in behind down the left side of the box, and he beat the onrushing McCarthy with a deft effort but Stephens was quick to get back and clear the ball from inside the 6-yard box. Southampton continued to struggle with Arsenal’s pace down the flank. This time, Bellerin found space down the right to whip a cross into the area but Pepe’s touch just took it away from Lacazette, who had drifted into a promising area.

Hasenhuttl’s team was enjoying a good spell of possession at present. Hopkins received the ball down the left and his cross cannoned out for a throw-in off Saka. After some time, Arsenal was struggling to get out of their half. Ings skipped beyond several defenders before forcing a save from Leno from an acute angle. The Gunners were struggling to get the ball from Southampton. Arsenal finally got a two-goal cushion in the 72nd minute of the game. Cedric played another inch-perfect pass over to the right for Saka. The teenager controlled it expertly and got the better of Redmond before driving the ball towards the back post. Lacazette arrived there immediately to steer it into the bottom left corner.

🥁 Your #SOUARS Man of the Match…

After the goal, the Saints were still being pressed by Arteta’s side, who was keen to deny the hosts from getting into dangerous areas. As such, McCarthy was forced to go long. Finally, the half ended with a score of 3-1 as Arsenal emerged victorious in this outstanding fixture. After a tightly contested match, the Gunners had clinched a hard-fought victory over Hasenhuttl’s Southampton to climb up the points table. Anyhow, Southampton will look to bounce back in their next match when they welcome Aston Villa to their home ground whereas Arsenal will be full of confidence against Manchester United in their upcoming league match.