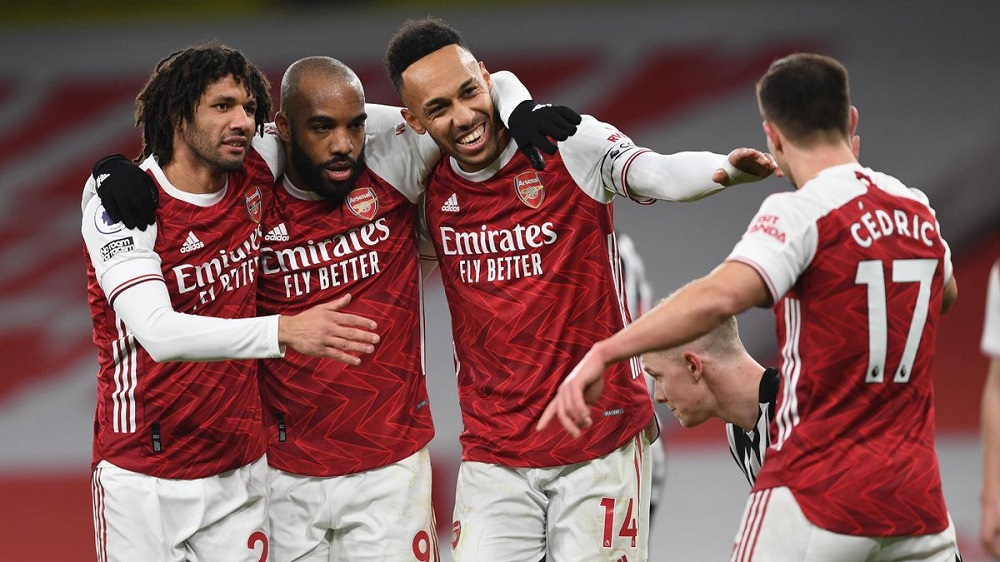 Arsenal hosted Newcastle United at the Emirates Stadium to play their 19th match of the Premier League. Arsenal made 3 changes to their squad that were Tierney, Partey, and Cedric. On the other hand, Newcastle United made eight changes in the squad with only Darlow, Clark, and Wilson keeping their place in the starting XI. Arsenal had won 4 of their last 15 Premier League matches against Newcastle United. Newcastle had lost their last eight away Premier League matches against Arsenal. The Gunners had won against the Magpies in the FA Cup Round 3 on 9th January of this year (2-0). So, the match was going to be really exciting as both the teams intended to climb up the points table.

The match began and Arsenal was maintaining good possession of the ball. In the 15th minute of the game, Saka made a brilliant run in the box and he fired a low strike at goal which was superbly saved by Darlow. However, he could just push it out wide to Aubameyang at the far post. But, luckily for the goalkeeper, the striker struck the post and the ball went away from the goal. Newcastle United did not leave a chance for counter-attack as Almiron did well down the right flank. He cut inside and played a one-two with Carroll before firing a shot at the goal from the edge of the box. However, his effort flew high over the box. The game started to become more open with both teams pushing forward on the counter and trying to catch their opponents off guard at the back.

With half an hour on the clock over, it was goalless between Arsenal and Newcastle. The hosts had their best chances of the game so far that Newcastle had defended really well. However, the pressure from Arsenal was building gradually. Consequently, it looked like it was only a matter of time before Arsenal found that clinical pass in the final third. Despite the pressure, Darlow hadn’t possessed too much in the Newcastle goal, his piece action was the save to deny Saka early on. At the end of the first half, the match was still goalless at 0-0. Arsenal was playing good football with some really good chances but they couldn’t find the breakthrough goal. On the other hand, Newcastle had defended well but they were put under a lot of pressure from their rivals.

The second half began and Darlow denied Lacazette early on itself. Saka lofted a ball in the box which took a deflection and Lacazette brought it down before drilling it towards the bottom left corner of the goal. However, Darlow got down quickly and pushed it out wide to keep the scores 0-0. But, just 5 minutes into the second half, Arsenal took the lead. Aubameyang broke the deadlock after a quick counter-attack. The striker beat Krafth down the left flank before powering the ball in the top left-hand corner of the goal as Darlow got no chance to make a save.

Newcastle United tried to build their play with Wilson and Carroll linking up well on the edge of the box. The ball fell to the latter striker who drilled a low strike towards the goal. However, it flew just wide of the left-hand post. In the 60th minute of the game, Saka doubled Arsenal’s lead and made it 2-0. Smith Rowe took on Lascelles and got in the box before pulling it back to Saka. The 19-year old midfielder sneaked into the penalty area and fired it into the back of the net. Finally, Aubameyang made it 3-0 in the 77th minute of the game. Cedric brilliantly skipped past the Newcastle United defenders and got to the byline. He then pulled it back to Aubamayeng who slid it in from close range and easily converted the goal.

The pace of the game dropped at the end of the half as Arsenal just sat back and played the ball comfortably around the pitch. Newcastle United was unable to win the possession back. Finally, the game ended with a score of 3-0 in Arsenal’s favor. With this win, Arsenal moved up to 10th position in the points table as they extended their unbeaten run to six games. Meanwhile, Newcastle United remained 15th, nine games without a win. Anyhow, both the teams will now be preparing for their next games. Newcastle United will be locking heads with Aston Villa whereas Arsenal will be going up against Southampton.

Man of the match last night in #ARSNEW? 💭