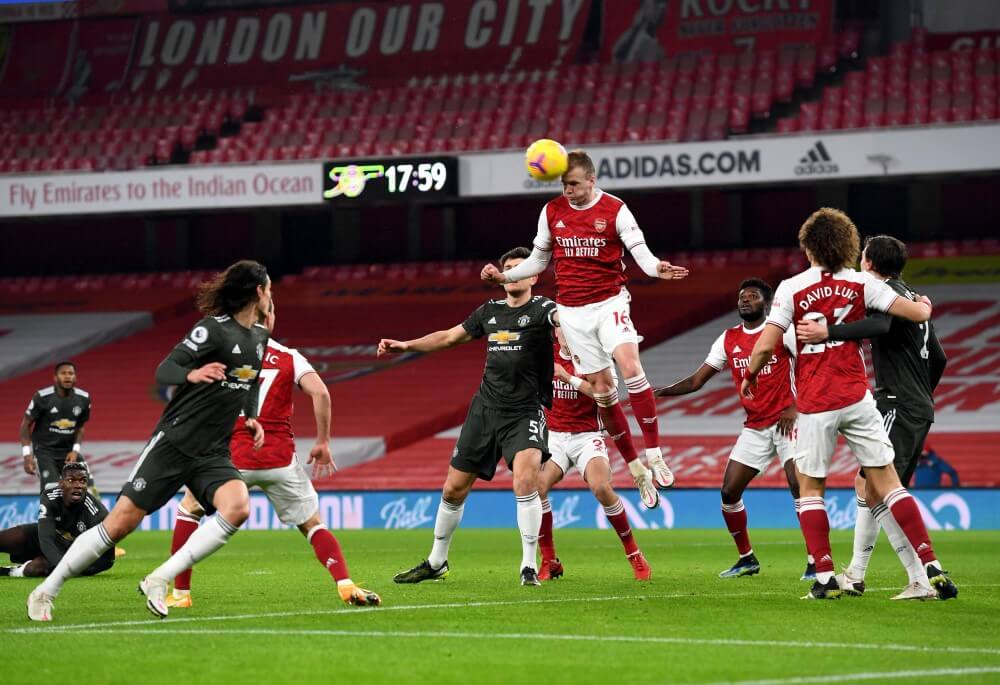 Arsenal hosted Manchester United to play their 21st fixture of the Premier League at the Emirates Stadium. The Gunners had been resurgent as of late and were meandering their way up on the points table. Mikel Arteta was under huge pressure during the Christmas period but his side had responded very well over the last month. The Gunners had won 5 out of their last 6 matches conceding only two goals in the process.

The Red Devils had suffered their worst result of the season losing 2-1 to Sheffield United at Old Trafford. Just when it seemed Manchester United was rounding into form to compete for the title, they look took a huge step back. Arsenal made one change to their side from their win over Southampton last time out. Manchester United, on the other hand, made five changes to their side in response to their defeat against the Blades. Manchester United began the game four points off the place of Manchester City and needed to reduce the deficit to put pressure back on their rivals.

The first half began as both the teams were trying to feel their way into the contest. Neither side was taking many risks in their approach. Cedric collided with Fernandes and hence, the Arsenal man was booked for his challenge in the 13th minute itself. In the 17th minute of the game, Martinelli worked the ball to Lacazette who launched a powerful strike from 20 yards. However, he blasted his effort straight at De Gea and the Spaniard made a comfortable save. McTominay was struggling with an injury for the visitors. He took a tablet provided by the physio that allowed him to tough out his issue.

Arsenal was attempting to contain Manchester United at the back, but the Red Devils had a dangerous pace on both the flanks with Martial and Rashford. The first half was about to end and there had been no sign of a goal from both the teams. Both sides were trying to make a difference but unable to convert their attacks for good. However, the last attempt of the half was taken by Bruno Fernandes who took a strike towards the goal. But, it struck the head of David Luiz and traveled over the bar. It was solid work from the Brazillian in the wall. The match was goalless at the break between Arsenal and Manchester United. It was an even first half as both the teams had some decent openings.

The second half began as Martinelli made way at the break for Willian. Willian latched on to a cross from Bellerin at the back post. However, he failed to get the ball out of his feet and his eventual strike was diverted behind by Wan Bissaka. The Manchester United defense held firm to clear their lines from deliveries from Pepe and Willian. The Gunners did not make the most of those crossing opportunities.

You've voted for @AWBissaka as your #MUFC Man of the Match! 🔴

Leno had acted brilliantly with a reaction save to deny Cavani from close range after neat interplay between Shaw and Martial who created an opening. The Uruguayan connected with a low effort that the keeper just turned past the post with his boot. In the 70th minute of the game, Manchester United were beginning to exert pressure on the Gunners in the final third but were lacking in a clinical edge. The game remained in the balance heading into the closing stages of the contest. Both the teams needed a moment of magic to try to earn the three points.

Your man of the match last night…

In the 89th minute of the game, Cavani almost got the lead for the Red Devils. Wan Bissaka whipped a dangerous ball towards the near post and the Uruguayan scooped a strike on the volley at goal. However, he placed his effort past the post. But, Martial running in behind him was arguably in a better position to convert. Just like that, the second half ended with a score of 0-0. The Gunners and the Red Devils played out a goalless draw in their Premier League clash and maintained their position in the points table. Anyhow, both the teams will be preparing for their upcoming league games now. Arsenal will be locking heads with Wolves away from home on Thursday whereas Manchester United will go up against Southampton on the same day at Old Trafford.