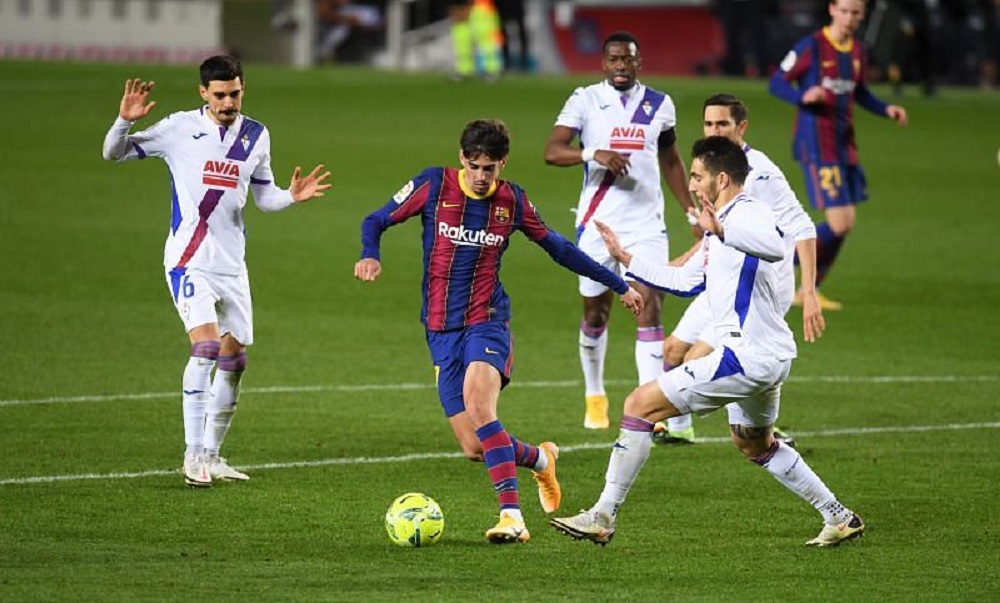 Barcelona dropped 2 points against Eibar to fall down on the points table.

Barcelona faced Eibar in their 16th fixture of this season yesterday. It was a day for them to seize a victory and move to the Top 3 on the points table. They were in the 5 position with 24 points as they had won 7, drawn 3, and lost 4 matches till now. Eibar, on the other hand, was in the 17 position as they had won 3 matches, drawn 6, and lost 6. As a result, the Catalans could climb up to the Top 3 for the first time this season after failing time and again in their matches. On the contrary, Eibar could also move above the relegation zone if they could get a win or at least a draw from this match. So, it was definitely going to be a thrilling match.

The match began as Eibar kicked off and the visitors were looking forward to maintain the pressure. However, the Catalans did not step back and were putting high pressure on their rivals. Consequently, they won themselves a penalty in the 7th minute. Araujo was fouled inside the box and hence, the Blaugranas were awarded a penalty. However, lucky for Eibar, Braithwaite missed the penalty. He shot the ball far off the left post and didn’t even force the Eibar goalkeeper to make a save. But, the Danish striker struck in the 25th minute to give his side an early lead. However, the VAR team denied the goal as Braithwaite was offside during the buildup of the goal. Consequently, the match continued and at the end of the first half, the score was 0-0.

The second half began and now the Barcelona players were looking desperate for goals. However, it was Eibar who struck first to create problems for the Catalans. Just 12 minutes into the second half, Kike Garcia scored an excellent goal for Eibar to give his side an edge over Barcelona. The Eibar captain stole the ball from Araujo near the center line and ran down to the Barcelona goal and then beat Ter Stegen with a great shot. However, it didn’t take the Blaugranas much time to respond. In the 67th minute, Ousmane Dembele scored the equalizer for Barcelona. After a great buildup between Junior Firpo and Coutinho, Junior put in a great cross inside the box but didn’t meet anyone. However, Dembele came running into the box to smash the ball into the left side of the goal. As a result, the score was now tied at 1-1.

Barcelona needed 1 more goal to take 3 points from this game. They tried all they could but couldn’t find the back of the net once again. Eibar did great defensively to restrict the Catalans from scoring their second goal. As a result, the visitors had won themselves a point at the Camp Nou. With this, Barcelona moved down to the 6th position as they’ve now drawn 4 matches. Eibar, on the other hand, climbed up to the 15th position on the points table as they now have 16 points. Anyhow, Barcelona will surely be happy that 2020 is over as it had been a disastrous year for them. Now, they’ll be preparing for their next game as they are going to face Huesca whereas Eibar will be up against Granada.