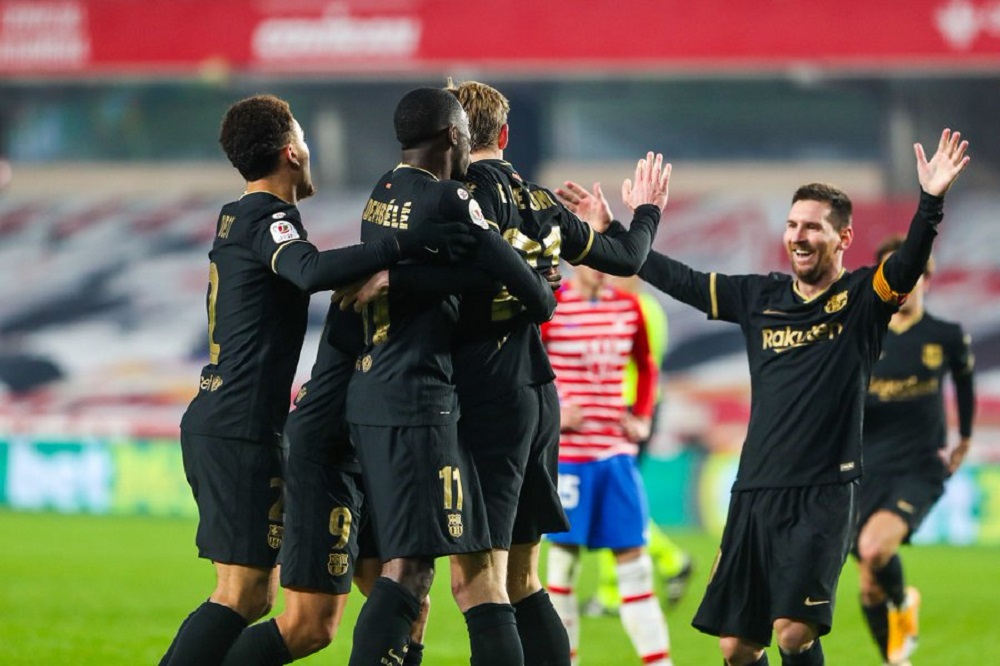 Barcelona make historic comeback against Granada to seal a spot in the Copa del Rey semi-finals.

Yesterday night, Barcelona locked heads with Granada in the Copa del Rey quarter-final at the Los Carmenes. It was going to be an interesting fixture as the winner would seal their spot in the semi-final of the domestic cup. The duo had already faced each other earlier this month in a league game at the same stadium. At that time, the Catalans had crushed the home side by a score of 4-0 with a brace from both, Messi and Griezmann. However, it wasn’t going to be easy now as both the teams were looking for a win in this knockout match.

The match began as Barcelona kicked off and they seemed to be in a brilliant rhythm from the beginning itself. They were trying to create chances and get an early lead. However, Granada didn’t give in easily and defended brilliantly against the Catalan giants. The Blaugranas completely dominated the game but failed to convert their chances and get a lead. On the other hand, the home side patiently waited for their turn as they were looking for a counter-attack or when Barcelona would make an error in their defense.

In the 33rd minute, Kenedy scored an easy tap-in goal to put the hosts into the lead. It was an amazing goal that came after an error from the Barcelona defense. Umtiti was passing the ball to Alba which was intervened by a Granada player. Soros picked on the ball immediately and sent a low cross inside the 6-yard box. Kenedy made no mistake and converted this opportunity calmly to give his side a 1-goal lead. However, Barcelona remained calm and kept creating their chances but the score at the end of the first half was 1-0 in Granada’s favor only.

The second half began and it felt like Ronald Koeman had given the Catalans some good talk in the interval. The players were motivated and desperately looking for an equalizer. However, it was Granada who got another goal just 2 minutes into the second half. This time, it was Roberto Soldado, the Granada striker who doubled the lead for the home side. Angel Montero picked up a loose pass from Griezmann and played a through ball to Soldado. The striker made an excellent run from the half-line while Umtiti was trying to track him back. But, Soldado put the ball past Ter Stegen smoothly to score the second goal of the game for his side.

Then, it felt like Barcelona was taking things easy and just passing the ball around. Granada also seemed comfortable with that and was only trying to defend their 2-goal lead. Escandell had put in a brilliant effort from his side as he had saved many Barcelona shots to maintain the lead for his side. Dembele and Trincao also hit the crossbar once each proving lucky for the home side. Finally, in the 88th minute, Griezmann scored the first goal of the game for the Catalans. Messi played a great ball to the French striker at the edge of the 6-yard box. Griezmann got a touch on the ball to target it towards the goal, it hit Escandell and finally went in to revive a hope amongst the Blaugranas.

The match continued immediately as the Catalans needed only 1 goal to level the game now. The referee gave 4 minutes of injury time and Barcelona made complete use of it. Messi hit the post once but didn’t let his guard down. In the 92nd minute, Messi played a similar ball to Griezmann just like the previous goal. But, this time the ball he had put in was a little higher. This time, the French striker played a pass to Alba who was in the 6-yard box with a simple header. Finally, the left-back headed the ball into the back of the net to score the equalizer for the visitors. Consequently, the game was now going to extra time and it would be interesting if Barcelona could make a comeback in this game now.

The extra time began and now 10 minutes into its first half, Griezmann scored his first goal to put the visitors in lead. It was a brilliant header to a ball put in by Jordi Alba. But, just 3 minutes later, Granada leveled the game once again. Fede Vico scored a penalty after sending Ter Stegen in the wrong direction. Dest brought down Neva inside the box as a result of which the referee awarded the home side with a penalty. Consequently, the score at the end of the first half of extra-time was 3-3.

The second half began and now the Catalans were desperately looking for a win. Consequently, in the 108th minute, Frenkie de Jong scored an easy tap-in on rebound after Escandell saved Messi’s shot. With that, the Catalans had once again managed to put themselves ahead of the hosts. In the 113th minute, Barcelona put the game to bed after Alba scored an outstanding volley goal. With this, the game ended in a 5-3 score as Barcelona made one of their greatest comebacks in the history of football.

Now, the Catalans have secured a place for themselves in the 2-legged Copa del Rey semi-final. It wasn’t quite an easy run for them in the domestic cup. First, they defeated Cornella, the side that had knocked out the defending champions of La Liga i.e. Real Madrid out of the competition. Then, they made a comeback against Rayo Vallecano in the Round of 16 to secure a place in the quarter-final. Finally, they made a historic comeback yesterday to now reach the semi-final. They will be playing two legs in the semi-final on 10th February and 3rd March. The draws for the above will be taking place tomorrow at the Spanish Football Federation headquarters in Madrid.