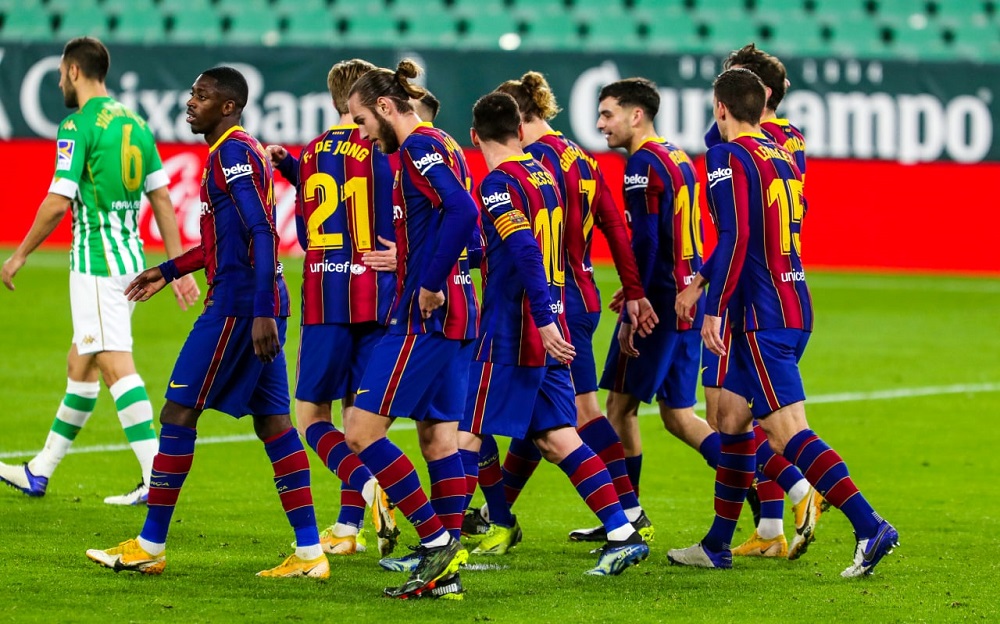 Barcelona made yet another great comeback this week against Real Betis to move back to the 2nd position in the La Liga points table.

Barcelona faced Real Betis yesterday at the Benito Villamarin for their 21st fixture of the season. It was going to be a really exciting match. Barcelona was down to the 3rd position in the points table after Real Madrid won their game against Huesca. So, the Catalans needed nothing short of a win to bag the 3 points from this game. On the other hand, Real Betis would also give their best to maintain their position in the Top 8 of the La Liga points table.   Consequently, fans and players of both the teams were thrilled ahead of this fixture.

The match began as Real Betis kicked off and they were posing to be a threat from the start. The hosts were attacking from the start and in the 3rd minute itself, they had their first big chance of the game. Moreno ran down the left flank to put a low cross inside the 6-yard box. Iglesias almost got to the end of it but failed to get a good touch on it. Consequently, the match continued. Barcelona was also creating their share of chances but didn’t manage to convert any of those. So, the match was still in a deadlock as both the teams were looking for a breakthrough.

Finally, in the 38th minute, the home side got into the lead after a goal from Iglesias. They broke on the counter-attack and dashed towards the Blaugranas half. It was some really quick attack from Real Betis. Fekir led the charge for them before passing it away to Emerson. The latter then put in a fine cross into which was tapped in neatly by Iglesias. With that, Real Betis had found the back of the net and were now leading. At the end of the first half, the score remained 1-0 with the hosts still in the lead.

The second half began as Barcelona kicked off and the visitors were now desperately looking for an equalizer. They were attacking from all side but failed to score from any of those opportunities. Finally, in the 57th minute, Messi and Trincao came in as substitutes for Puig and Pjanic respectively. The Barcelona talisman made immediate impact as he scored an equalizer just two minutes later i.e. in the 59th minute. Dembele passed the ball to Messi just inside the edge of the box. The 33-year old Argentine was completely unmarked. Messi then smashed the ball into the near side past Robles as the ball took a deflection off the right post and went into the goal. Consequently, Barcelona had now leveled the game at 1-1.

The game continued and it was just a matter of time before the Catalans got their second goal. In the 68th minute, Victor Ruiz scored an own goal to give the visitors a lead. Messi and Alba linked up well as the latter dashed down the left flank. Alba then deliver a pass into the 6-yard box for Griezman.. However, the French striker failed to get a touch on the ball properly. But, the Blaugranas were lucky as the ball took a deflection off Victor Ruiz and went into the goal. As a result, now Barcelona were leading 2-1 in the game.

It seemed like Barcelona had got good grip now and were looking tight in their defense despite Araujo suffering an injury. However, in the 75th minute of the game, Real Betis scored an equalizer. Busquets had committed a foul on Fekir just outside the box a minute ago. Consequently, Fekir delivered a great cross inside the box from the freekick. Victor Ruiz headed it home past Ter Stegen with a rocket finish. The defender made up for the own goal he had given by mistake. Anyhow, the game was at an interesting note once again.

The final minutes were here now and it was looking like the game would end in a stalemate. However, Francisco Trincao scored a goal for the visitors this time to win the game for them. Ruiz failed to clear the ball and the Portuguese forward immediately picked it up inside the box. He then curled it in into the top left corner of the goal to put them in the lead once again. With that, the game came to an end as Trincao scored his first La Liga goal and the winning goal for the Catalans.

Is Barcelona still in the La Liga title race?

Barcelona made a thrilling comeback once again last night to defeat Real Betis and rise up to the 2nd position in the points table. We cannot say whether they are still in the race for the league title or not. Atletico Madrid is 7 points ahead of them with still 2 games in hand. This is surely a huge advantage for the league leaders. However, the Catalans will give their best and fight for the trophy. Apart from all this, Real Betis maintained their position in the 7th place. Anyhow, both the teams will now be looking forward to their next games and preparing for them. Barcelona will be facing Sevilla in the Copa del Rey semi-fina Leg 1 this week whereas Real Betis will lock heads with Villareal next week.