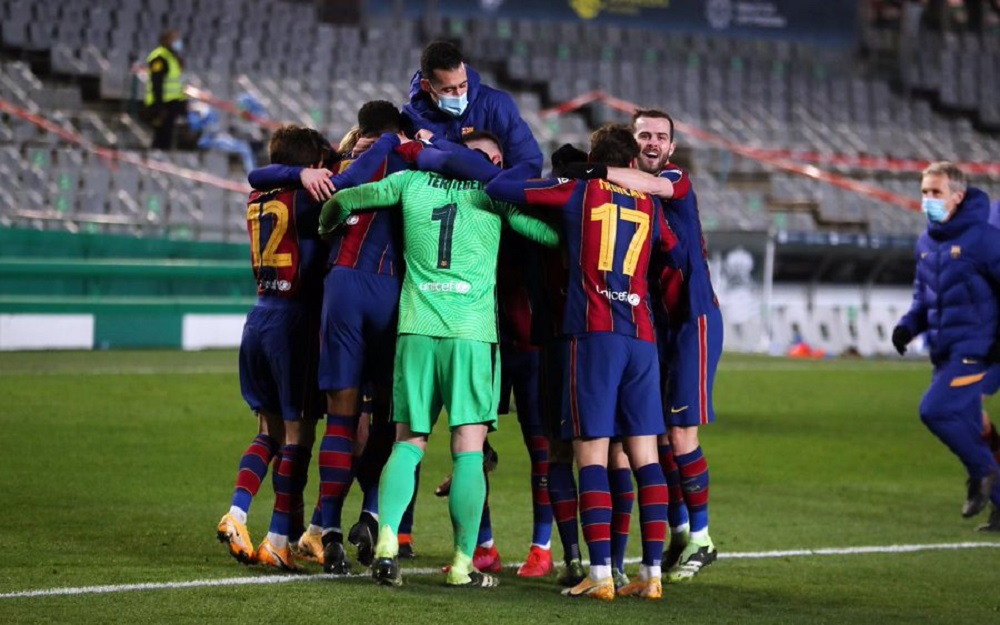 Barcelona players celebrate after they knocked Real Sociedad out in the Supercopa de Espana semi-final despite missing Messi.

Yesterday night, Barcelona faced Real Sociedad in the Supercopa de Espana semi-final. It was going to be a really interesting game as the winner would move past to the final that is on 17th January. Everyone was excited for the game as just a month ago, Barcelona had beaten Real Sociedad in the league game. However, this time their skipper Lionel Messi was missing the game due to an injury. But, the Catalans would give their best to win the game and move a step closer to the title. So, let us see what happened during this semi-final clash.

The match began as Barcelona kicked off and they started off with their standard possession game. However, Real Sociedad did not step back and were pressuring the Catalans from the start. Consequently, Barcelona lost possession many times but they managed to win the ball back. Soon enough both the teams were creating chances but neither of them was able to convert. As a result, the possession game continued.

Finally, in the 39th minute, the Blaugranas found the back of the net with an excellent goal from Frenkie de Jong. Braithwaite released Griezmann on the flank who dashed down the left-wing. The Frenchman then chipped the ball into the 6-yard box which was headed into the goal excellently by De Jong. As a result, the Catalans had got into the lead just before the end of the first half.

Also Read: Barcelona Crush Granada To Climb Back To Top 3

The second half began and now Real Sociedad was desperately looking for an equalizer. In fact, just 4 minutes into the second half, the former won themselves a penalty. Merino was trying to play in a cross but his shot hit De Jong’s hand and hence, they had a penalty. Mikel Oyarzabal took the spot-kick and converted it easily after sending Ter Stegen the wrong way. Consequently, just 6 minutes into the second half, Real Sociedad had found themselves an equalizer. The match then continued and now both the teams were creating chances once again. However, once again neither of them was able to convert those.

As a result, the match went into extra time. Now, it was going to be really interesting to see if either of them could find the back of the net now. So, the match progressed and now once again, Real Sociedad and Barcelona were creating chances. However, in both the halves of the extra time, both the teams created plenty of chances but were unable to convert those. Ter Stegen and Remiro made some brilliant saves each for Barcelona and Real Sociedad respectively.

So, the match finally went to penalties and now it was all going to be decided by five spot-kicks. Ter Stegen did great work as he saved the first two penalties and the third one hit the post. He couldn’t save the last two but Barcelona managed to score three of the penalties and won the match. Dembele and Pjanic converted the penalties easily and Puig took the final one to take Barcelona through to the finals. Now, the Catalans are through to the final and they will be facing the winner from the other semi-final today i.e. between Real Madrid and the Athletic Club of Bilbao.

Man. Of. The. Match. pic.twitter.com/c60JYs0Ogh