Barcelona Pick Up 3 Points Against Huesca Away From Home 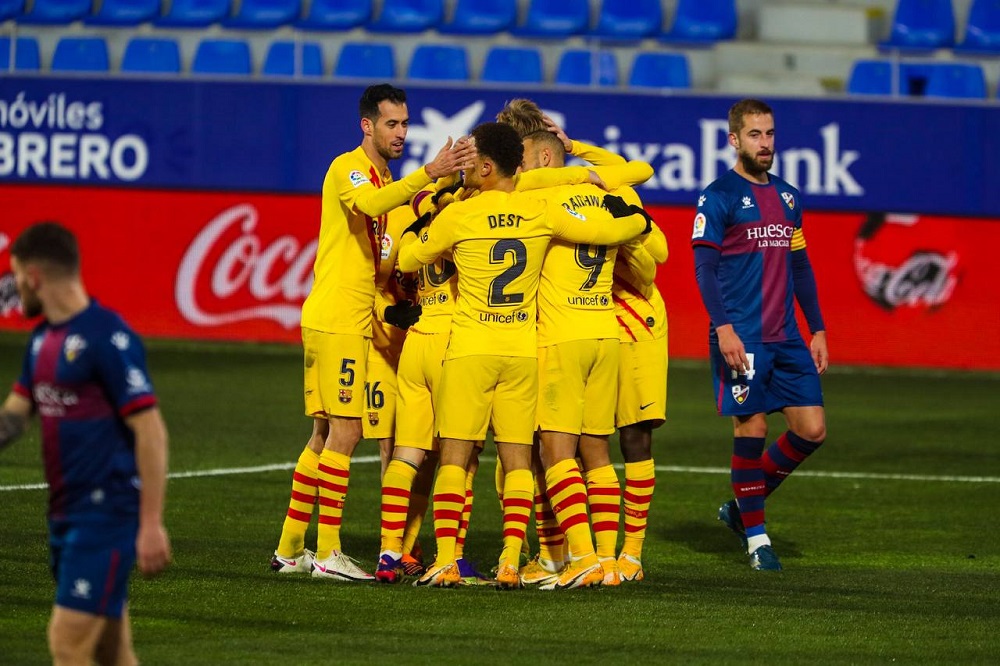 Barcelona won the match against Huesca yesterday to pick up 3 points away from home.

Barcelona faced Huesca yesterday in their 16th fixture of the season. It was a chance for them to climb up to the Top 5. They had 25 points as they had won 7 matches, drawn 4, and lost 4 until now. Huesca, on the other hand, had a chance to battle their way ahead to the 18th position and move away from the relegation zone. They had only 12 points as they had won only 1 match, drawn 9, and lost 7 as of now. So, it was going to be a really interesting match as Barcelona had drawn their previous match against Eibar whereas Huesca had lost to Celta Vigo.

The match began as Barcelona kicked off and the Catalans were playing their standard possession game. However, they had different plans this time. They were playing aggressively and creating chances from the beginning to get an early goal. But, they were only able to create chances and not convert those. Finally, in the 27th minute, De Jong found the back of the net after a brilliant ball from Messi. The Barcelona skipper spotted De Jong’s run and kept in an inch-perfect cross which was easily cushioned by the Dutchman into the right corner of the goal. As a result, the Catalans were now leading by a goal. They tried to put more past Huesca but were denied time and again by the goalkeeper. Anyhow, the referee blew the whistle at halftime as Barcelona was leading with a goal.

The second half began and now Huesca was desperately looking for a goal. They kicked off and tried to pressure Barcelona into making a mistake. However, the Catalans did not give up that easily and pressed highly to steal the ball from them. Consequently, they were creating chances once again but were unable to convert them. But, Huesca was also able to create a chance or two but Ter Stegen did a great job to keep a clean sheet for his side. With that, the match came to an end as Barcelona had won their first game of the calender year 2021. They had won the 3 points away from home against Huesca to create more trouble for the hosts.

Also Read: Barcelona Vs PSG: Messi Vs Neymar- All You Need To Know About The UEFA Champions League RO16 Draws

With a victory in this match, Barcelona climbed up to the 5th position in the points table. They are now just one point ahead of Sevilla having played a match more than them. On the contrary, Huesca maintained their position at the bottom of the points table as they are now 2 points and a match behind their next rivals, Osasuna. Anyhow, both the clubs will now be preparing for their next match as they will look forward to win the 3 points from it. Barcelona will be locking heads with Atheltic Club of Bilbao whereas Huesca will be up against Real Betis.