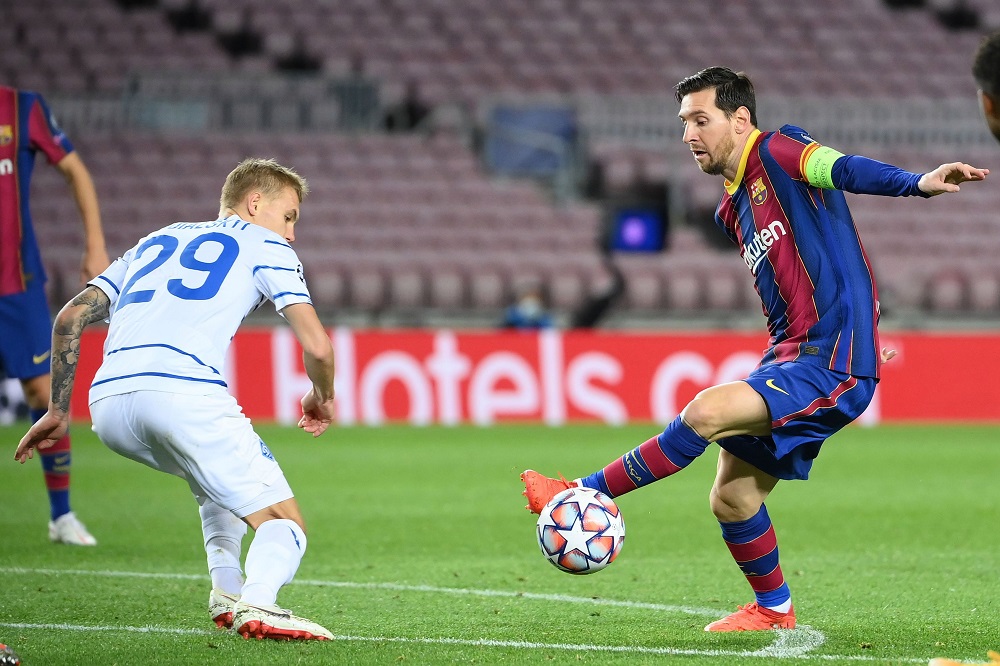 A still of Lionel Messi dribbling from Dynamo Kyiv's V. Buyalskyi during matchday 3 of the UCL.

The UEFA Champions League is back with some amazing fixtures. The 2020/21 UCL began on 19 October 2020. It started late this year as the previous seasons of various leagues and the UCL ended late. Anyhow, after 3 matchdays got over, all the players went on international duty to represent their respective nations. However, now that the international break is over, it is once again time for UCL matchdays. So, here we are as the stage is all set for matchday 4 of the UEFA Champions League. We’ll be seeing many thrilling and interesting matches once again. However, let us go through the squad and lineup for the Group G fixture i.e Barcelona vs Dynamo Kyiv. Barcelona is the group toppers whereas Dynamo Kyiv is at the 3rd position in the points table. However, the match will definitely be exciting due to a few reasons. Let us see what those reasons are.

Barcelona Squad for the match:

The Barcelona manager Ronald Koeman has opted to take 19 men with him to his trip to Kyiv. However, you’ll be shocked to know that some major players are missing from the squad. Even though Barcelona is at the top of the table with 9 points, they still need 2 more points to qualify for the Round of 16. Ansu Fati is out due to his long time injury. Gerard Pique will be missing after he picked up an injury against Atletico Madrid in their 1-0 defeat. Apart from that, Koeman has also decided to drop Lionel Messi and Frenkie De Jong from his 19-man squad. He wanted to give the players some rest since they’ve played all the games till now and that too with full 90 minutes except Messi who played only in the second half against Real Betis. Consequently, now you’ll surely be interested in knowing which players will be going to Kyiv.

Barcelona’s squad for their match against Dynamo Kyiv:

This is surely a unique and interesting set of players that the former Netherlands coach has chosen. Dynamo Kyiv created a lot of difficulties for the Catalans in their last fixture. Dynamo had traveled to Barcelona to play at Camp Nou and even though they lost 2-1, they played with great calm and composure. In fact, the 18-year old Dynamo Kyiv keeper received special appreciation for his excellent saves and goalkeeping in that match. At that time, the Ukrainian club was missing some of its first-team players but still managed to create problems for the Blaugranas. As a result, the clash is going to be nerve-wracking. Anyhow, here’s a look at the way Koeman may lineup his players against Dynamo Kyiv.

So, who do you think will be taking the 3 points from a victory tonight? FC Barcelona or FC Dynamo Kyiv?