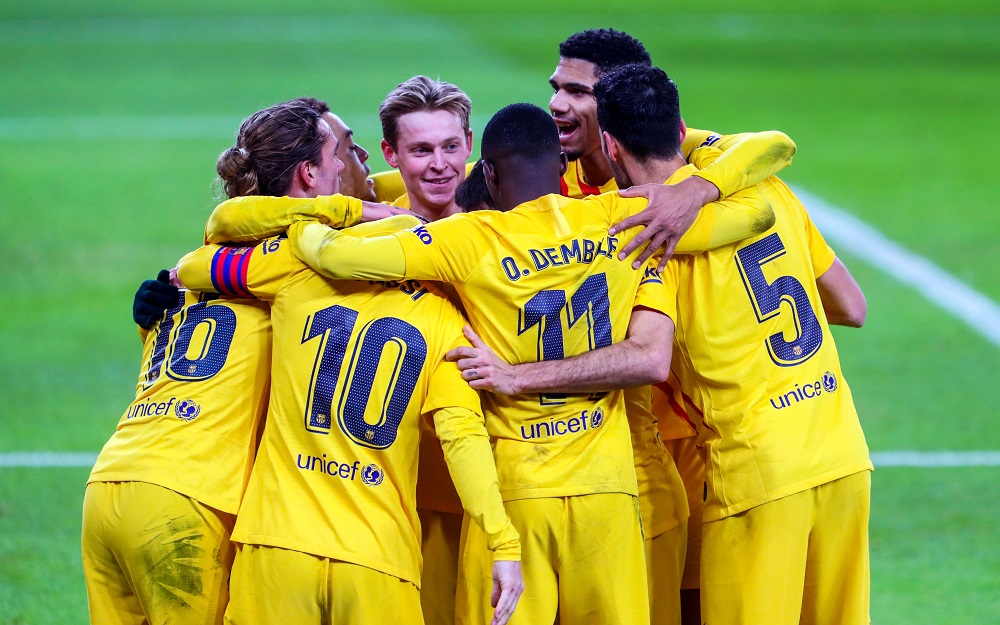 Barcelona won 3 points against Athletic Club away from home to climb up to the Top 3 for the first time this season.

Barcelona played their 17th match of the season against the Athletic Club of Bilbao yesterday at the San Mames. However, it was the 18th match of the Athletic Club’s campaign. Barcelona was in the 5th position and with a win in this match, they could climb up to the Top 3. They had 28 points as they had won 8 matches, drawn 4, and lost 4 until now. On the other hand, Athletic Club could climb up to the 7th position as they had won 6 matches, drawn 3, and lost 8 till now. So, it was definitely going to be an interesting match as neither team would settle for a draw because they both needed those 3 points from this victory.

The match began as Athletic Club kicked off and they were looking in a dynamic form with their new manager Marcelino. They got off to a great start as in the 3rd minute itself, the hosts had themselves a goal. Raul Garcia put a through ball for Inaki Williams after Dest lost the ball near Athletic Club’s box. Williams dashed down towards the Barcelona goal with the ball and after cutting back inside the box to send away Lenglet, he smashed the ball past Ter Stegen to give his side an early lead. Consequently, Athletic Club now had an edge over Barcelona. However, the Catalans did not give up and pressed high to get themselves an equalizer. Finally, in the 14th minute, Pedri scored the equalizer for them.

After a great ball almost at the byline from Messi, De Jong looped it over to Pedri who was at the edge of the six-yard box. The 18-year old midfielder headed the ball into the goal to level the scores for Barcelona. However, that was not it as just before halftime, Barcelona got into the lead with a Messi-Pedri linkup in the 38th minute. After Messi passed the ball to Pedri, the midfielder set up the Argentinian with a great assist in front of an open goal. The Barcelona captain then shot the ball into the goal easily to give his side the lead before halftime. As a result, the score at the end of the first half was 2-1 in Barcelona’s favor.

The second half began and now Athletic Club were looking desperate for an equalizer. The tables had been turned but Barcelona seemed to be in an even better form now than the first half. They were creating more and more chances. Messi scored a goal but it was deemed as offside and he even hit the post once. However, in the 62nd minute, Messi scored his second goal of the game to double the lead for Barcelona. After a good pass from Griezmann inside the box, the Argentinian smashed the ball onto the lower part of the crossbar as the ball went into the goal. Even after all this, Messi failed to score his hattrick as he hit the post once again.

Also Read: Barcelona Vs PSG: Messi Vs Neymar- All You Need To Know About The UEFA Champions League RO16 Draws

But, unluckily, due to an error from Messi, Athletic Club got their second goal of the match. After a sloppy pass from Messi, Berenguer intercepted and set up Iker Muniain. Muniain then curled the ball into the goal to bring Athletic Club back into the game. However, Barcelona managed to hold their nerve and win the game with a score of 3-2. With this victory, Barcelona climbed up to the 3rd position in the points table. They have made it to the Top 3 for the first time this season. Athletic Club, on the contrary, moved down to the 9th position. Anyhow, now both the teams will be getting ready for their next games. Barcelona will be facing Granada whereas Athletic Club will be going up against Athletico Madrid.