Barcelona Struggle Against Sevilla As Match Ends In Draw 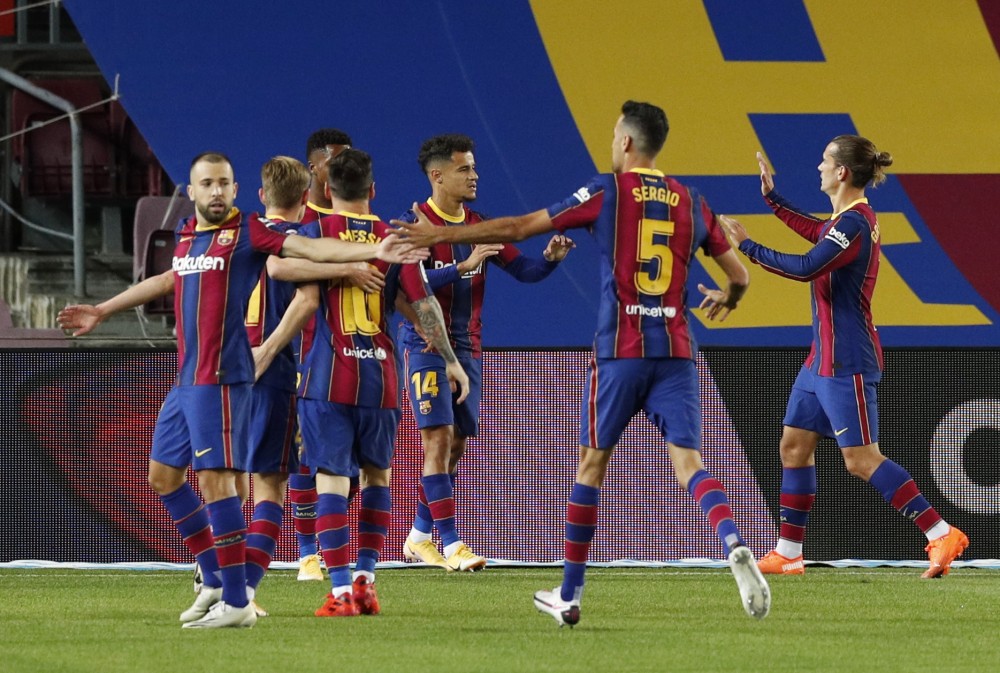 Barcelona struggled against Sevilla but managed to draw the match.

Barcelona played the 3rd game of their 2020/21 season this Sunday. They had won their first two matches against Celta Vigo and Villarreal. Now, they were going up against Sevilla, who had also won each of their first two games. The match was going to decide which team would continue their streak and which would drop 3 points. Barcelona was hosting the march at their home ground, i.e., Camp Nou. Another reason why the match was going to be interesting was that the Catalans were going to be up against their former player Ivan Rakitic who was now a part of the Sevilla squad. Rakitic left the club this summer to join his former club Sevilla on a deal worth €1.5 million. So, let us see who emerged victorious in the match.

The match started as Barcelona kicked off on the referee’s whistle. The Blaugranas were under pressure from the beginning of the match. Sevilla was completely dominating Barcelona in possession, as well as passing and pressing. Finally, the visitors got their first goal in the 8th minute as Frenkie de Jong cleared the ball with a header, but Luuk de Jong smashed the ball into the net immediately. However, soon enough, in the 10th minute, Coutinho scored the equalizer for Barcelona. Messi was passing the ball to Alba, but Navas intercepted it. The ball fell straight into Coutinho’s feet with the Sevilla keeper Bono charging towards Alba. However, Coutinho made no mistake and shot the ball directly into the back of the net. The Brazilian celebrated as he dedicated the goal to his pregnant wife.

After that, in the 18th minute, Sevilla had a great chance as Fernando failed to touch the ball. He fell short by a stud’s length. Otherwise, Sevilla must have had a 2-1 lead. Just 3 minutes later, Griezmann also had a brilliant chance, but he shot the ball a few inches away from the goal’s left post. Then, in the 27th minute, Rakitic created an amazing chance, but no Sevilla player was near the penalty spot. The ball went directly to Barcelona, and they cleared it. Just like that, the score at the end of 1st half was 1-1. It was going to be an interesting second half now to see who takes the win home.

The second half began, and Sevilla made no changes in their gameplay. They continued pressing the Catalans and were successful in doing so as the hosts were losing the ball again and again. It seemed like Barcelona was not even trying to pressure their opponents. In the 64th minute, Araujo almost hit an own goal when Youssef En-Nesyri was crossing the ball in, but it hit Araujo’s foot and took a deflection off the crossbar. Then, in the 82nd minute, Barcelona also had a close call when F. de Jong hit the ball a few yards away from the right post. Finally, the match ended in a tie with a score of 1-1.

Points to take away from the draw:

Sevilla FC has proved their excellent form as they won the UEFA Europa League and gave a strong competition to Bayern Munich for the UEFA Super Cup. They once again showed everyone that they are going to be a tough team to go up against. On the other hand, the Blaugranas were seen struggling against the visitors. After their amazing first two victories, they were seen lacking passion for their game against Sevilla. However, the highlight of the game for them was that Sergino Dest made his debut. He proved in the few minutes he played that he can play as a left full-back also if Jordi Alba needs a replacement. He has already proven his worth as a right full-back at Ajax. Now, it will be interesting to see how Koeman uses him in their next match against Getafe. On the contrary, Sevilla will be next facing Granada.