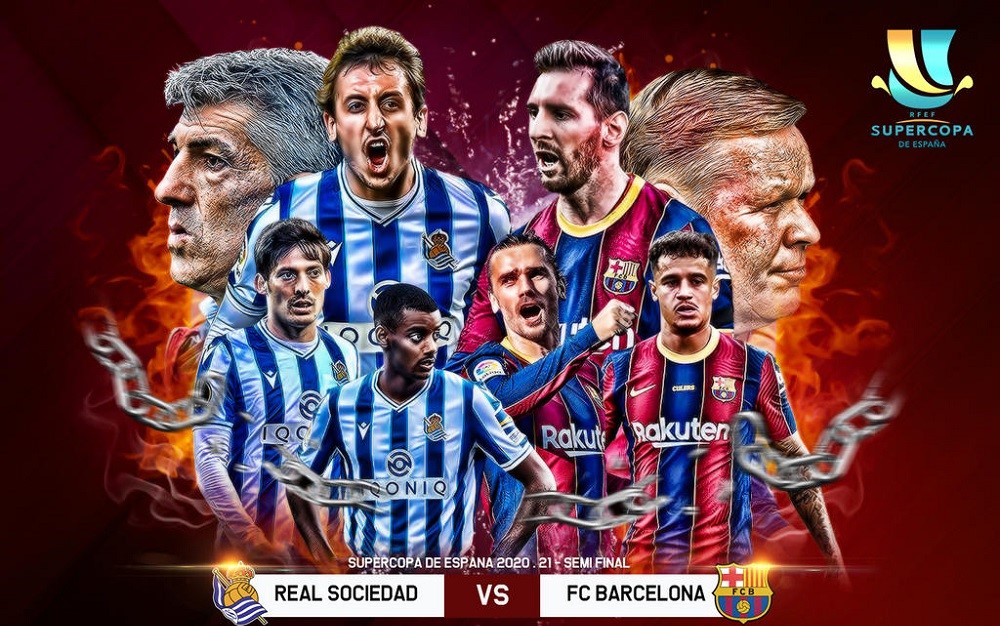 Barcelona will be facing Real Sociedad for the Supercopa de Espana semi-final and here's all you need to know.

It is time for yet another interesting fixture as tomorrow Barcelona will be playing against Real Sociedad in the Supercopa de Espana semi-final. It will surely be a really interesting game as the two are giving each other a strong competition currently for the league title. Barcelona qualified for Supercopa de Espana as they finished in the 2nd position on the La Liga points table last season. On the other hand, Real Sociedad paved their way to the semi-final after they qualified for Copa del Rey 2019/20 final. As a result, both the teams will be battling it out for a spot in the finals. The winning team will then play the winner of the other semi-final between Real Madrid and Athletic Club.

The match will be really exciting as it has only been a month since the teams last faced each other. After an excellent game, Barcelona defeated Real Sociedad by a scoreline of 2-1. They fought bravely to make an outstanding comeback against them. Alba and De Jong scored brilliant goals to help the Catalans seal a great victory. You’ll surely be excited to see the list of players that are traveling for this Supercopa de Espana semi-final. So, take a look below at Barcelona’s squad for the match against Real Sociedad.

As you can see, Koeman has decided to take 21 players for their trip to Cordoba. The former Dutch manager has included the best players as he knows Real Sociedad will give their best. Consequently, if Barcelona wants to compete for the trophy, even they need to bring their A-game with them. Both the teams have clashed many times and Barcelona has come out on the top. They have won 28 of the 41 fixtures whereas Real Sociedad could only conquer 7. The remaining matches ended in a draw and hence, Barcelona has come out as a better team. However, it will now be exciting to see how Barcelona might lineup for the match. Here’s our prediction for the starting 11 for tomorrow’s game.

🎙️ @RonaldKoeman: "Barça is used to fighting to win titles. Our mentality is to give it our all and reach the final"

It doesn’t come as a surprise that Koeman might choose the following players to start tomorrow’s game. The team has been doing great as they’ve won all their 3 fixtures last week. They defeated Huesca, Athletic Club, and Granada to pick up 9 points and climb to the Top 3 of the points table. As a result, the Blaugranas will be looking forward to continue their winning streak and qualify for the final of the Supercopa de Espana. They’ll try to make it to the finals as last year Atletico Madrid knocked Barcelona out after a 3-2 loss.

All Culers will surely be interested in seeing the game tomorrow. So, here are all the channels and streaming platforms where the game will be broadcasted.