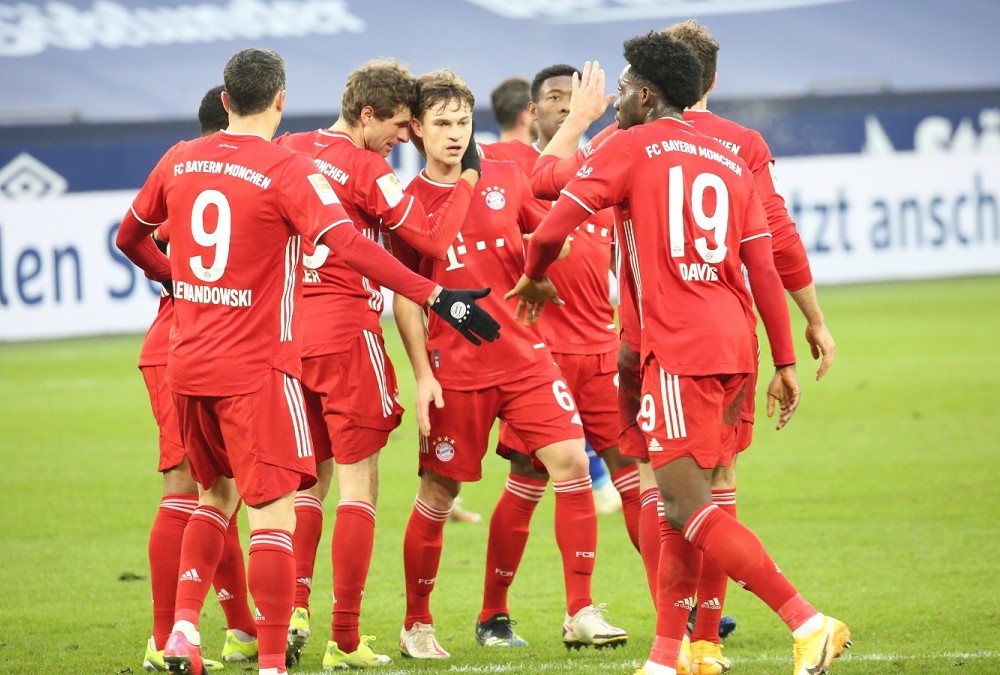 Bayern Munich thrashed Schalke to extend their lead the league leaders of the Bundesliga.

Schalke hosted Bayern Munich to play the 18th fix of Bundesliga at the Veltins-Arena. It was a game between the top and the bottom in the German top flight. Bayern could move seven points clear at the summit with a victory over Schalke, who were currently 10 points away from safety at the foot of the table. Christian Gross made just a single change from Schalke’s last-minute defeat against Koln midweek. Bastian Oczipka was replacing the Arsenal loanee Sead Kolasinac at left-back.

Talking about Bayern, Hansi Flick made three alterations from their narrow win over Augsburg. Two of them came in defense, with Niklas Sule and Alphonso Davies replacing Benjamin Pavard and Lucas Hernandez. Leroy Sane was recalled against his former club to the left side of the attacking trio behind lone striker Robert Lewandowski. FC Schalke 04 hadn’t won any of their last 20 Bundesliga games against FC Bayern. So, the match was going to be really interesting as Bayern Munich was looking for some secure points whereas Schalke would try to get themselves in the safe zone.

The match began as Schalke had their first effort on goal as Becker tried his luck from distance. However, his tame left-footed strike was easy enough for Neuer to gather. At the other end, the left foot of Sane unleashed Bayern’s first attempt. Once again though, the winger’s effort was never troubling the goalkeeper and flashed wide. Consequently, the Bundesliga’s top scorer Lewandowski timed his run to meet Kimmich’s delightful cross but sent his header just over the crossbar. The game was still goalless after the opening quarter of an hour. Schalke was pleased with the start that they made to the contest but were desperately looking for a breakthrough.

The visitors had a breakthrough in the 33rd minute of the game. Kimmich was allowed far too much to set himself and delivered a beautiful cross to the far post where Muller peeled away from his marker to head the ball past Fahrmann. However, at the end of the first half, Becker made a great tackle over Kimmich to rescue Schalke from conceding another goal. Schalke may be trailing but they generally held their own so far. The hosts had created opportunities too. Even then the score at the end of the first half was 1-0 with Muller getting his name on the scoresheet.

The second half began as the hosts had their early chance to get an equalizer with the help of a corner. The delivery was met by the head of Nastasic over 12 yards from the goal. However, he needed to generate power on the ball, but his header went just wide of the target. Then came the customary goal from the number nine Lewandowski who timed his run perfectly to latch onto Kimmich’s long ball over the top of the Schalke defense. Although the angle was tight, he did brilliantly squeeze his shot underneath the dive of Fahrmann.

However, Schalke continued pressuring their opponents to try and level the game. Firstly, Boateng was forced to make an important intervention with Raman. The Schalke striker was waiting to turn home a cross at the far post. A few moments later, Uth drilled a low 20-yard strike that flashed just wide of the target. Muller found his second goal in the 88th minute of the game. He was in the right place at the right time to head home Kimmich’s inviting freekick.

After that, Alaba scored the 4th goal in the 90th minute of the game to settle the game once and for all. Alaba smashed a powerful effort from a distance that squirmed under the dive of the Schalke goalkeeper. With that, the match came to an end as Bayern Munich had thrashed Schalke 04 with a score of 4-0. Anyhow, the defending champions will look forward to continue their momentum when they host Hoffenheim next weekend. Meanwhile, Schalke will resume their desperate search for points away at Werder Bremen.