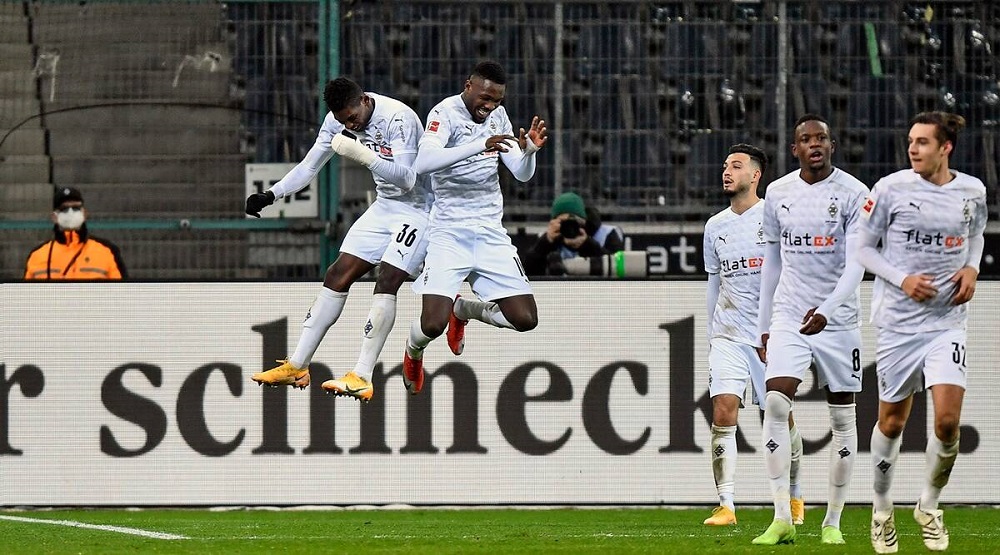 Borussia Monchengladbach crushed Borussia Dortmund to move above them in the Bundesliga points table.

Borussia Monchengladbach welcomed Borussia Dortmund to the Borussia-Park to play their 18th match of this Bundesliga season. It was the 98th meeting between Monchengladbach and Dortmund in the league. Dortmund had won each of their last 11 Bundesliga games against Gladbach. This was the Foals longest losing streak against a side in the Bundesliga history. Dortmund hadn’t lost any of their last 16 fixtures to start the second half of the season. The game was going to be the captivative ones of Bundesliga as the hosts would leapfrog their visitors into the fourth for the time being with a win while Dortmund could kick-off matchday 18 by reducing the gap to seven points from the top.

Dortmund got the ball rolling as the referee blew the whistle for kick-off. They began as they were maintaining good ball possession and playing their standard game. Neuhaus almost gave the hosts a lead in the opening minute of the game. Hofmann robbed Bellingham of the ball on the edge of the Dortmund area and flicked it to Neuhaus. The latter then curled it to the top corner. However, after the VAR check, the goal was ruled out. The match referee Manuel Grafe consulted his pitch monitor and ruled Hofmann’s challenge on Bellingham as a foul. Gladbach had some fire in their bellies as they were frustrated that the goal was disallowed. They were pressing forward aggressively and got their first dangerous shot away following some swift build-up, but Burki tripped Hofmann’s drive from the edge of the box around the post, driving to his right at full stretch.

Gladbach’s Hofmann curled a free-kick from the right and Elvedi got his head on it and nodded it into the bottom corner. Again there was a VAR check but this time it was for offside. However, this one did count and Gladbach led the way in the 11th minute of the game. But, soon in the 22nd minute, Erling Haaland equalized the game. Out of the blue, the young Dortmund striker leveled the game. Sancho drifted inside from the left and played a clever ball into Haaland’s run. The Norwegian dinked it over the onrushing Sommer to make it 1-1.

After that, in the 29th minute, Haaland gave Dortmund a 2-1 lead. Sancho played a one-two with Bellingham on the edge of the Gladbach box. He received the return pass but was surrounded by white shirts. However, he still managed to flick the ball to Haaland. The 20-years-old still had plenty to do with his back to the goal. However, he turned brilliantly and lashed the ball in at the near post to put Dortmund in front.

Also Read: Barcelona Defeat Cornella To Move Through To The Round Of 16 Of Copa Del Rey

But, Gladbach stayed strong and got an equalizer in the 32nd minute of the game. Hummels fouled Neuhaus just outside the Dortmund area. Stindl powered the resulting free-kick at goal and although Burki made the save, the rebound fell straight at the feet of Elvedi who tapped in his third goal in 2 games. Consequently, the scores were all square again. As a result, the first half ended with the scores being leveled at 2-2.

The second half began and now both the teams were looking forward to get their lead back. However, Monchengladbach succeeded in achieving a breakthrough just 4 minutes into the second half. In the 49th minute, Neuhaus got the hosts back into the lead. He clipped a lofted pass out to the left to Bensebaini. There appeared to be a relatively little danger initially. However, he sprinted forward, cut inside Brandt before curling in a beautiful shot into the far corner with his weaker right foot.

The away sides were winning in terms of tackles but were unable to convert the attack for good. Marcus Thuram made the win more comfortable for the hosts in the 78th minute. Neuhaus took a corner from the left and Thuram jumped on the edge of the six-yard area to head in his third goal of the season. Dortmund tried to make a comeback in the last 10 minutes of the game but the effort was not good enough to break the wall and the keeper of Gladbach.

The referee Manuel Grafe then brought the game to an end with the full-time whistle. It was a big win in every sense of the world for Monchengladbach as they ended their long losing streak against Dortmund. They moved up to the 4th position in the points table as they now have 31 points. On the other hand, Borussia Dortmund moved down to the 5th position as they still had 29 points. Anyhow, both the teams will now be preparing for their upcoming games. Borussia Dortmund will be facing Augsburg next on 30/01 i.e. Saturday whereas Monchengladbach will lock heads with Union Berlin on 30/01 i.e. Saturday.