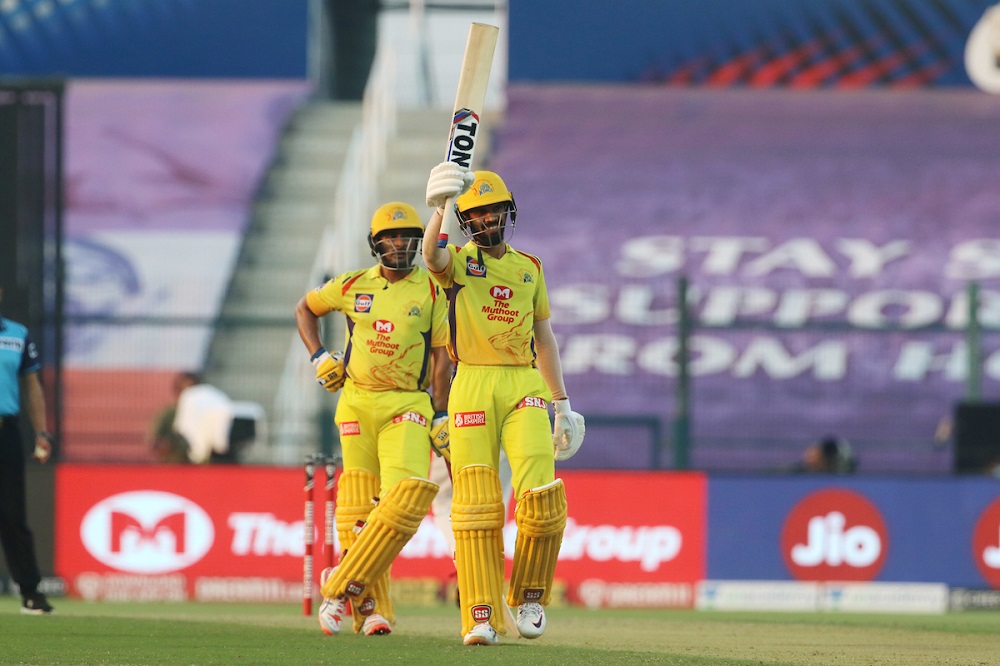 Ruturaj Gaikwad shines once again to lead CSK to another victory.

We are in the final week of IPL 2020 but we still don’t know which teams will qualify for the playoffs. Mumbai Indians is the only team to have qualified yet as they sit on the top of the points table with 18 points. The competition has been completely mesmerizing this season as a team like Chennai Super Kings has been knocked out and teams like RCB and DC have been ruling in the tournament. However, it all comes down to the final matches of the league. So, let’s talk about match 53 which was played between Chennai Super Kings and Kings XI Punjab. Kings XI Punjab needed to win this match if they wanted to qualify for the playoffs. On the other hand, CSK was already knocked out. So, they were just defeating the other teams now to crush their chances of qualifying.

Chennai Super Kings won the toss and opted to bowl first. They had been in an amazing form since the past few matches bowling first. However, things went south for them as Mayank Agarwal and KL Rahul were totally thrashing the CSK bowlers. Finally, in the 6th over, Lungi Ngidi got CSK its first breakthrough as he dismissed Agarwal (26 in 15). However, the former had done the damage as CSK KXIP got 53 runs on the scoreboard just from the powerplay. Soon, in the 9th over, Ngidi struck again as he got Rahul’s (29 in 27) wicket. As a result, Chris Gayle (12 in 19) and Nicholas Pooran (2 in 6) came to the crease. But, they failed to deliver as both of them got out in the 13th and 12th over respectively.

So, Mandeep Singh and Deepak Hooda came to the crease now to give the KXIP innings some stability. They had just started to settle in when Jadeja sent Mandeep (14 in 15) back to the pavilion in the 17th over. As a result, Neesham came to support Hooda but could not last much as he got out in the 18th over. So, Chris Jordan came in at 8 now. Hooda, on the other hand, was not disturbed by his teammates getting out and was thrashing the CSK bowlers. He scored 62* runs in just 30 balls whereas Jordan got 4* in 5 balls to take KXIP’s total to 153-6. Now, this was not a huge target but Punjab would definitely give CSK a fight.

The second innings began as Ruturaj Gaikwad and Faf du Plessis opened the innings for CSK. The duo had been in excellent form. The 23-year old youngster (Gaikwad) had been quite impressive since the time CSK had been knocked out. Once again, the pair was thrashing the KXIP bowlers as they got 57 runs from the powerplay itself. All the more, they had not lost a single wicket. They built a good partnership of 82 runs in just 59 balls before Du Plessis got out in the 10th over. After that, Ambati Rayudu came in at 3 and he helped Gaikwad finish off the chase easily in 18.5 overs. Rayudu scored 30* in 30 balls whereas Gaikwad had smashed 62* in just 49 balls.

'CSK is synonymous to MS Dhoni'@faf1307 & @NgidiLungi speak about the Definitely Not moment from @msdhoni & also look back at the season gone by for the men in yellow.

With this match, CSK crushed KXIP’s hope of qualifying for the IPL 2020 playoffs. CSK, on the other hand, had finished their season with their head held high. They had won their last 3 matches consecutively. Ruturaj Gaikwad also won the Man of the Match award for his unbeaten match-winning knock of 62 runs in just 49 balls. CSK had not made it into the playoffs of IPL for the first time. However, they made sure that they crushed the hopes of some other teams too. The game was also special because MS Dhoni had said in the pre-match interview that this was not his last game for the Yellows. This means that next year, you’ll once again get to see Mahi play for CSK. Now, the tournament comes down to KKR, SRH, RCB RR, and DC who still have a chance for qualifying from their upcoming matches.