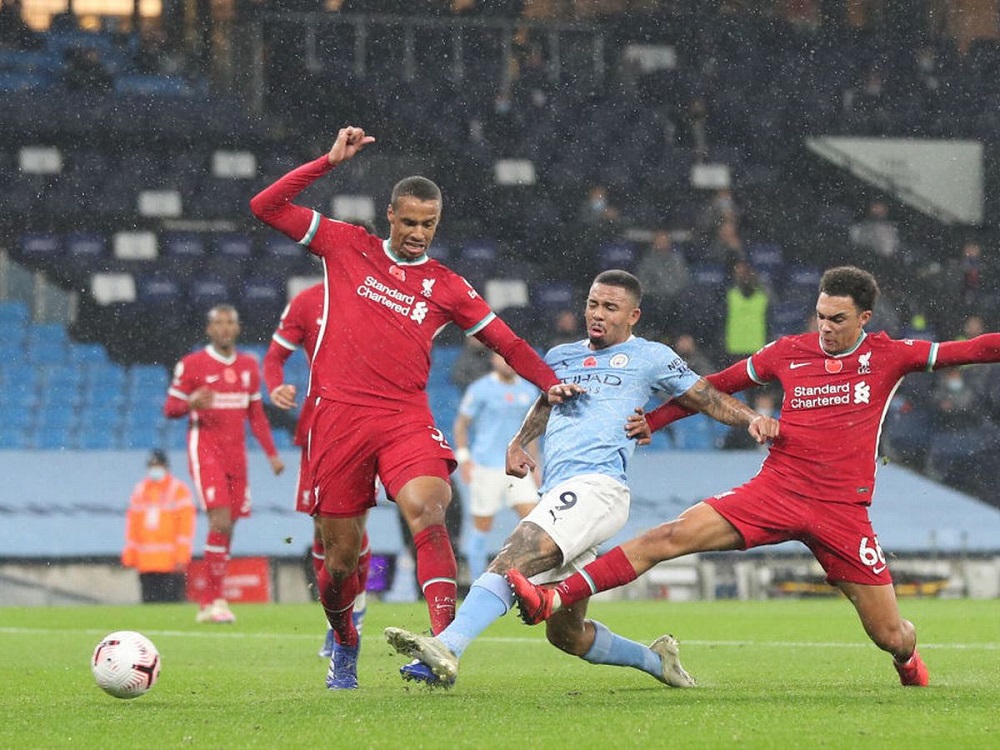 A still of Gabriel Jesus (center) scoring the goal against Liverpool FC after dribbling from T. Alexander-Arnold (right) and Matip (left).

Premier League is one of the most competitive leagues in football and everyone has seen that for themselves this season. The competition is wide open this time as we’ve seen the top teams struggling. On the other hand, the teams that barely made the Top 4 have been dominating the league completely. We’ve got to see some brilliant matches till now filled with drama and thrill. Yesterday, it was time for another nerve-wracking match as the defending champions Liverpool were set to Manchester City. Liverpool were the 2019/20 Premier League champions whereas Manchester City were the 2018/19 Premier League winners. It was going to be interesting to see who would get 3 points from this match at the City of Manchester Stadium.

The match began as Liverpool kicked off and they were playing pressure game from the start. However, this did not seem to affect Manchester City who played freely without letting the pressure get to them. The Blues played a good possession game but in the 11th minute, Sadio Mane won his team a penalty as he fell inside the box after a light touch from Kyle Walker. Walker and his teammates tried to argue with the referee but the latter had already given a penalty. Salah took the penalty and made no mistake in converting it. He smashed the ball into the bottom left of the net to give his team a 1-goal lead. It had only been 10 minutes since the game had started and Liverpool was already leading.

However, in the 25th minute, City got a great chance after an error from Wijnaldum. Torres won the ball from him and passed it to Kevin de Bruyne. The latter then crossed it in to Jesus who left the ball for Sterling. Sterling, instead of passing to Jesus went himself for the goal but missed it. Allison made a good save to keep his team in the lead. However, soon enough in the 31st minute, Gabriel Jesus scored a brilliant goal to level the scores. De Bruyne passed the ball to Jesus inside the box who was marked by Alexander-Arnold. However, Jesus controlled the ball with the first touch and turned and shot the ball past Allison with his left foot.

In the 32nd minute, De Bruyne tried to smash the ball from outside the box but hit it too wide from the left post. Just 7 minutes later, City won themselves a penalty as the ball hit Joe Gomez’s hand inside the box after a cross from De Bruyne. However, the City skipper De Bruyne missed the penalty as he thrashed it just a few inches away from the left post. In the 43rd minute, Liverpool also had a great chance as Trent Alexander-Arnold hit the ball with great power but Ederson made an excellent save to deny the Liverpool fullback. As a result, the scores at half-time were tied at 1-1.

The second half began and it seemed like Klopp had asked the Reds to go all-out attack. Liverpool were pressing Manchester City completely and also keeping good possession of the ball. Consequently, in the 49th minute, they got a chance after a good save from Ederson. However, the ball went straight to Diogo Jota who failed to add power to his shot. Ederson made a simple save to once again deny the Reds. However, soon in the 55th minute, City also got a chance as Cancelo kept a good ball inside the box for Jesus. But, the latter missed the target as his header went wide off the left post.

Both the teams kept pressing and tried to score a goal but none of them managed to do so. As a result, the match ended in a draw at 1-1. The Manchester City captain, Kevin de Bruyne must have surely regretted that he missed the penalty. However, with this draw, City managed to climb up to the 10th position whereas Liverpool went down to the 3rd position in the points table. The Reds had a chance to move up to the top of the points table but had failed to do so. City, on the other hand, continued their goal drought in the Premier League as they’ve not been able to score more than one goal in 70% of their matches till now. Anyhow, City will now be facing Tottenham in their next match whereas Liverpool will be up against Leicester City after the international break is over.