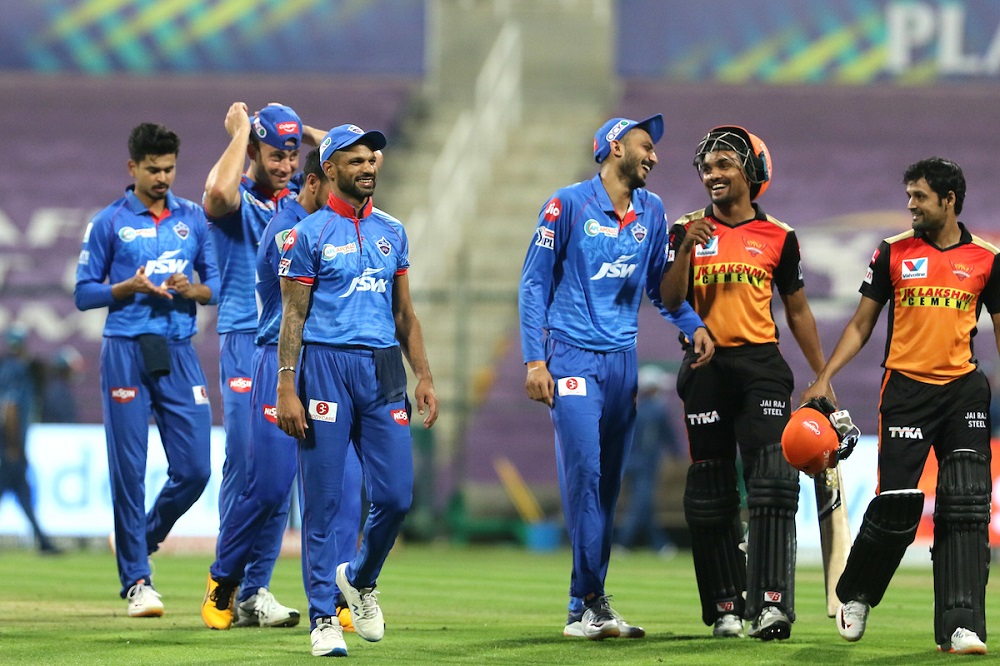 IPL, when you hear about this tournament, you know it is going to be interesting. Just like always, this year also we got to know why it is one of the biggest T20 international league in the world. Not only did we get to see many close and nerve-wracking matches, but we also saw the teams and players breaking various records. However, this journey is soon going to come to an end as we are in the final stages of the league. Mumbai Capitals had stormed into the finals after defeating Delhi Capitals in Qualifier 1. On the other hand, Sunrisers Hyderabad had crushed Royal Challengers Bangalore in the Eliminator to advance into Qualifier 2. So, now it was time for Qualifier 2 as Delhi Capitals and Sunrisers Hyderabad were going to lock horns with each other.

Delhi Capitals won the toss and their skipper Shreyas Iyer opted to bat first. DC had dropped Prithvi Shaw to include Praveen Dubey in their playing 11. Shaw had not delivered upto the mark this season which resulted in Iyer dropping him. As a result, Marcus Stoinis and Shikhar Dhawan opened the innings for DC. Iyer’s decision 0f batting first turned out well for them as Stoinis and Dhawan were smashing the SRH bowlers from the beginning of their innings. In fact, they managed to get 65 runs from the powerplay itself without losing any wicket. However, after the powerplay in the 9th over, Rashid Khan got SRH their first breakthrough as he dismissed Stoinis (38 in 27). As a result, the DC skipper himself came in at 3. He (Iyer- 21 in 20) had just started settling in when Jason Holder dismissed him in the 14th over.

As a result, Shimron Hetmyer came to support Shikhar Dhawan from the other end of the crease. However, Dhawan seemed to be unaffected by the dismissals as he continued hammering the SRH bowlers. Finally, in the 19th over, Sandeep Sharma managed to send him (Dhawan- 78 in 50) back to the pavilion. Now, Rishabh Pant came in at 5 as just 9 balls were remaining. Hetmyer thrashed SRH as he scored 42* in just 22 balls. Pant, on the other hand, chipped in 2* in 3 to take DC’s total to 189-3 in their 20-over innings. This was a huge total even for SRH who had some excellent batsmen as DC had a great bowling attack.

The second innings began as David Warner and Priyam Garg opened the innings for SRH. Everyone was shocked to see Garg open for SRH as he was a middle-order batsman. However, he started smashing boundaries which cleared everyone’s doubts. However, on the first ball of the 2nd over, Rabada got DC their first breakthrough as he dismissed the SRH skipper David Warner (2 in 3). As a result, Manish Pandey came in at 3. The former scored some good runs but in the 5th over, Stoinis dismissed Garg (17 in 12) to put Pandey under pressure. In the same over, Stoinis got another wicket for his team as he sent Pandey (21 in 14) also back to the pavilion.

Now, Kane Williamson and Jason Holder were on the crease. The duo had won SRH their previous match against RCB and now all hopes were on them. They were scoring some good runs but in the 12th over, Axar Patel broke their 46-runs partnership to dismiss Holder (11 in 15). After Holder came Abdul Samad who was also hitting some good shots as he got a few boundaries. However, in the 17th over, Stoinis once again delivered with the ball as he sent Williamson (67 in 45) back to the pavilion. Now, Samad (33 in 16) and Rashid Khan (11 in 7) were SRH’s last hope. However, soon Rabada dismissed them both and even Shreevats Goswami (0 in 1) to seal the victory for DC. Finally, Shahbaz Nadeem and Sandeep Sharma played the last over as DC won the match by 17 runs.

Marcus Stoinis won the Man of the Match award for his all-round performance with both, the bat and the ball. He smashed 38 runs in just 27 balls to give his team a great start. With the ball, he took 3 wickets in his 3-over spell giving away 26 runs. However, those were 3 crucial wickets of Priyam Garg, Manish Pandey, and Kane Williamson. Now, Delhi Capitals have secured their place in the IPL 2020 final. For the first time in the team’s history, they have qualified for the IPL finals. As a result, they will be facing Mumbai Indians in the Dubai International Cricket Stadium on 10th November i.e. Tuesday. So, what do you think? Will MI win their fifth IPL title or can Shreyas Iyer lead Delhi Capitals to their first-ever IPL title? Let us know your thoughts below in the comments section.

#DelhiCapitals' Marcus Stoinis wins the Man of the Match award for his brilliant all-round display in #Dream11IPL #Qualifier2 clash against #SRH pic.twitter.com/exdv1vTBlT