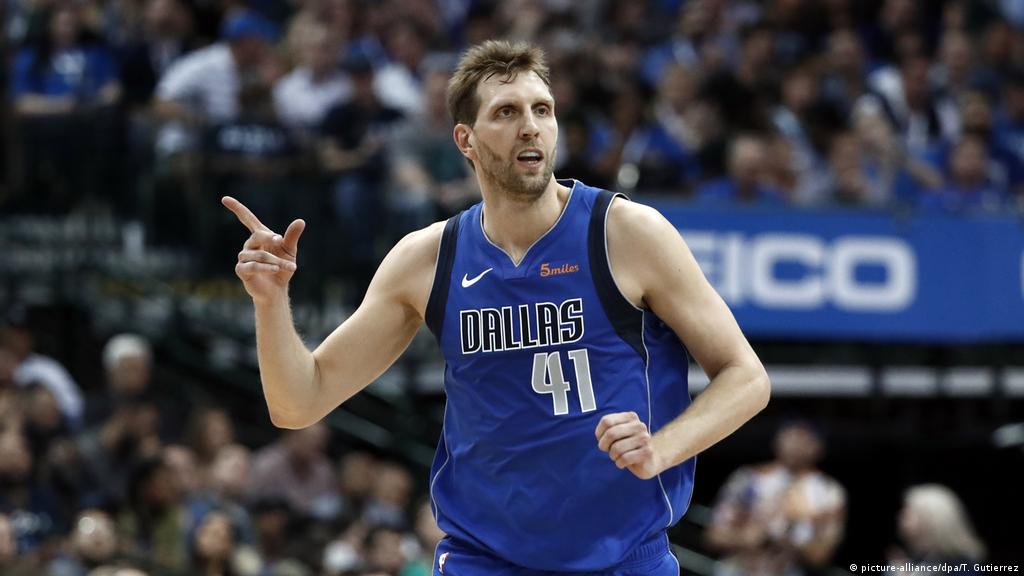 Dirk Nowitzki is arguably the biggest European player to ever play in the NBA. He is the only player in the history of the NBA to play for a single team in his entire career. Dirk played for Dallas Mavericks for a record 21 seasons, from 1998-2019. In such an illustrious career, Nowitzki played as a power forward, and for many, he is the greatest power forward alongside Tim Duncan. He had the ability to shoot great three-pointers and his famous fade-away jump shot. Coming from Germany, there were no German players at the time he joined the league. He is also the sixth-highest scorer in the NBA of all time.

In his twenty-one seasons for the Mavericks, the team has won only one championship. This is something Dirk would have wanted more to have. The title came in 2011 against the very strong Miami Heat. Nowitzki was instrumental in guiding the team to the championship and was awarded the Most Valuable Player in the final. He is a 14-time All-Star, 4-time All-NBA-First-Team, and a winner of the three-point contest. On the 75th NBA anniversary, Dirk Nowitzki was included in the team. Representing Germany, he managed a bronze medal in the 2002 world cup. Nowitzki also won a silver medal at the Eurobasket tournament in 2005. The seven-foot-tall forward scored an astonishing 31,560 points in the NBA.

Let us have a look at his life, career, earnings, and net worth.

Born on 19 June 1978 in Wurzburg, Germany, Dirk Nowitzki comes from a family of sports professionals. Starting with his mother, who was a professional basketball player. His father represented the German handball team at the highest international level. So the sporting aspect was always there in the blood, and with such a great height, basketball seemed fair. Furthermore, Dirk became a pro at the age of just 16. He played in the second division team for DJK Wurzburg. From the second season onwards, his game started to improve a lot, and people could notice the difference between him and the other players. At an international event, he got the chance to play against a few NBA players like Charles Barkley and Scottie Pippen. Nowitzki completely destroyed Charles, and in response, Charles invited him to join the NBA.

In 1998, Dirk has got a lot of college offers, but he decided to directly jump into the league. He was the ninth pick in the first round of the NBA draft. Milwaukee Bucks selected the German giant, but he was instantly traded. Dallas Mavericks picked him, and the rest is history. He spent twenty-one glorious years with the franchise and retired in 2019. Even though the Mavericks won the championships only once, his individual performance has never let anyone down. He has always maintained his level as one of the best, and he left the league that way. It is an easy answer to say that Dirk is probably the best European Basketball player of all time.

Dirk Nowitzki’s salary as a player was about $23 million. His net worth is reported to be around $140 million.

This is it on Dirk; we will be back with more of such high-profile athletes.

Also Read: International NBA Stars: Let’s Have A Look At Them