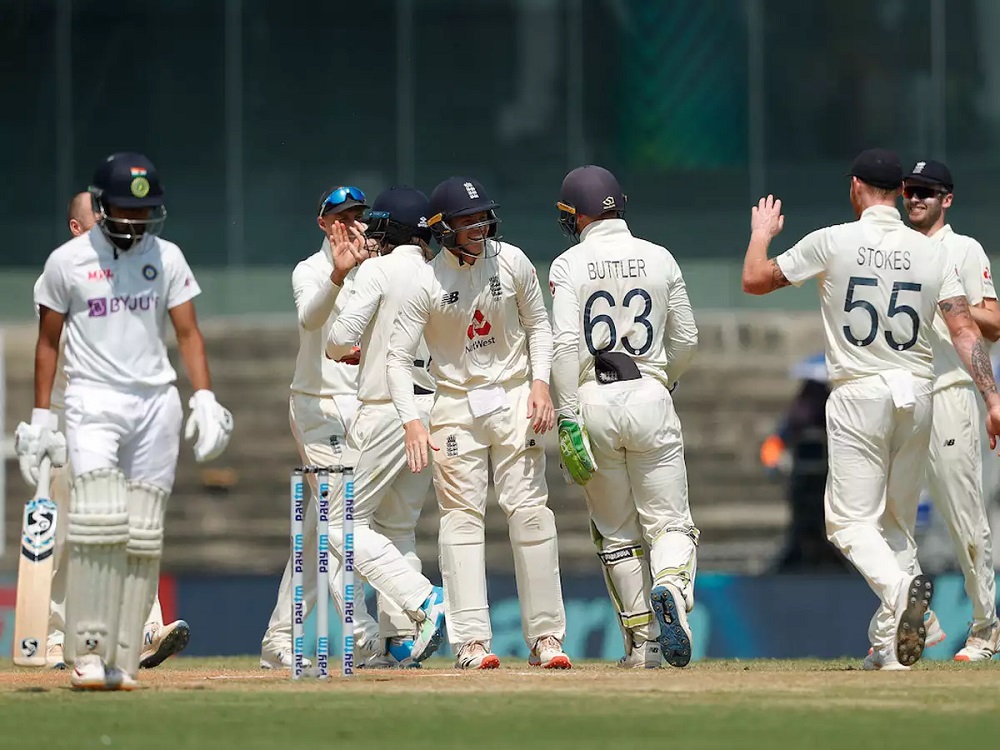 England crushed India to win the 1st Test match by 227 Runs and take a 1-0 lead in the Paytm Test Series.

England started off the India tour with the Paytm Test Series on 5th February. The 1st Test match began on the same day as both the teams were looking strong. India had recently defeated Australia in their home whereas England had crushed Sri Lanka at their home in a Test series. So, there was no such favorite and everyone was excited for this fixture. The series was important for both the teams as its winner will move onto the final of the ICC World Test Championship final.

England won the toss and their skipper Joe Root opted to bat first considering the conditions of the pitch. He knew that the pitch was purely batting and wanted to get the most runs out of it. Hence, he took the above decision. Consequently, Rory Burns and Dominic Sibley opened the innings for England. The visiting team didn’t get the perfect start that they wanted but surely at the end of the day, they had dominated the home side. England was 263-3 in 89.3 overs with Joe Root surviving at the end of the day. Root was playing at 128* in 197 whereas Sibley was the other high scorer of the day who got out after scoring 87 runs in 286 balls.

Joe Root and Ben Stokes continued with England’s innings on Day 2 and they were looking to dominate the Indian bowlers from the beginning. Stokes played a fantastic knock of 82 runs in 118 balls whereas Root converted his century to a double-ton to give the Indian innings a boost. After that, Shahbaz Nadeem struck to dismiss him (Root- 218 in 377). At the end of Day 2, England managed to reach a total of 555-8 in 180 overs. The middle-order players had also contributed a little bit to this total.

Day 3 wasn’t really England’s day as they soon got all out. They managed to register a score of 578 runs only in 190.1 overs. As a result, now India needed to score at least 579 runs to take the lead from the visitors.

India began their 1st innings as Rohit Sharma and Shubman Gill opened the innings for them. They were looking to capitalize but failed to achieve much. At the end of Day 3, only Rishabh Pant and Cheteshwar Pujara were the stars for the Indian cricket team. Pujara scored 73 runs in 143 balls whereas Pant smashed 91 runs in just 88 balls. Consequently, they managed to reach a total of 257-6 in 74 overs with Washington Sundar and Ravichandran Ashwin set on the crease.

Sundar and Ashwin came to the crease at the beginning of Day 4 as India was all ready to continue their 1st innings. However, they were only able to get their score to as far as 337 before getting all out in 95.5 overs. Sundar did a great job with the bat as he scored 85 runs in 138 balls to remain not out. Ashwin also scored 31 runs in 91 balls which contributed to India’s final total. Consequently, India was now trailing by 241 runs and England could give them a follow-on. However, the visitors opted to bat first in their 2 innings and put up a better total in front of the hosts.

England began their 2nd innings immediately but failed to score much in this. Root was the highest scorer for his team as he got 40 runs in 32 balls. Anyhow, India was able to restrict England to a total of 178 in just 46.3 overs by getting them all-out. As a result, now India needed to chase a target of 420 runs to win this match.

The hosts began their 2 innings but once again lost an early wicket with Rohit Sharma getting out in the 6th over itself. At the end of Day 4, India was 39-1 in 13 overs and needed 381 runs on the final day to secure a win in this match.

Cheteshwar Pujara and Shubman Gill came to the crease to continue India’s 2nd innings on Day 5. However, Pujara got out in the 20th over after scoring 15 runs off 38 balls. Consequently, Virat Kohli came to the crease and was settling in well with Gill. But, in the 27th over, Gill (50 in 83) also got out after completing his half-century. After that, the entire Indian batting lineup just collapsed. Rahane (0 in 3), Pant (11 in 19), Sundar (0 in 5), and Ashwin (9 in 46) got out one after the other in some intervals of time. Virat Kohli (72 in 104) stood strong for his team but even he got dismissed in the 55th over. Consequently, England managed to dismiss the entire team at a score of 192 runs in just 59 overs.

With that, England won the 1st Test match to take a 1-0 lead in the Paytm Test Series. They won the match by a massive margin of 227 runs. Now, it’ll be very difficult for India to make a comeback from here and win the series. The English team will surely try to maintain their rhythm and continue their brilliant winning streak. On the other hand, India will now try to make a comeback and win the next Test match that will be starting on 13th February at the MA Chidambaram Stadium itself.