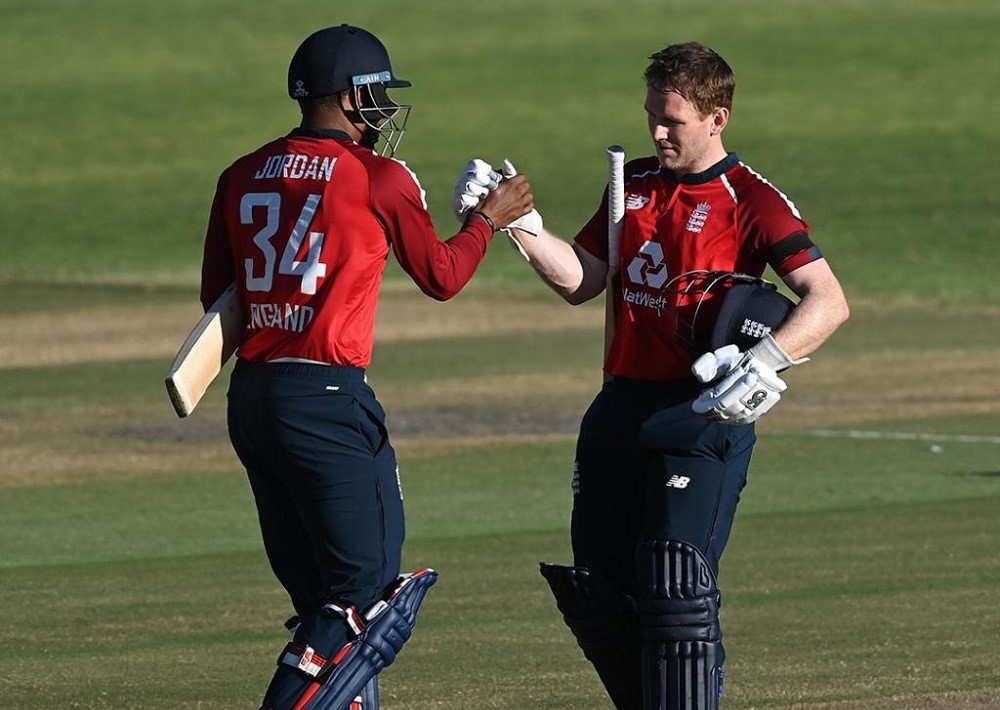 Chris Jordan (left) and Eoin Morgan (right) celebrating after they won the match for England.

International cricket made a return a few weeks ago after the conclusion of IPL. Our favorite players got back to playing our favorite sport for their respective nations. Due to the ongoing pandemic, many series and tours had to be canceled. However, now every activity, be it sport or some other industry has adapted to the new normal. As a result, we got to see IPL 2020 late this year from the month of September. It concluded in November with the defending champions Mumbai Indians being crowned as the title winners for the 5th time.

However, with its conclusion, the players returned to international duty for various series and tours. One of them is England’s tour of South Africa. The Englishmen traveled all the way to South Africa for a limited-over series. The T20I series began on 27th November with England winning the first match. As a result, it was time for the second match as England was looking to seize the series with another win whereas South Africa was looking forward to stay in the competition with a win.

The match began as England won the toss and chose to bowl first. They wanted to restrict South Africa to a low total just like the previous match. So, their skipper Eoin Morgan opted to bowl first. As a result, in the 4th over, they got their first breakthrough. The South African batsmen got a great start but Archer dismissed Bavuma (13 in 10) in the 4th over. Just 2 overs later, De Kock (30 in 18) also got out. Consequently, now Hendricks and Du Plessis were on the crease. They tried to settle in but Hendricks (16 in 18) soon got out in the 9th over. Soon after him, even Du Plessis (11 in 11) got dismissed in the 11th over.

As a result, Van der Dussen and Klaasen came in at 5 and 6 respectively. However, the latter (Klaasen- 7 in 10) was unable to contribute much as he got out in the 14th over. So, George Linde came to support Dussen from the other end of the crease. They both managed to get a few runs on the scoreboard for their time. However, in the last over George Linde (29 in 20) got out. Consequently, Kagiso Rabada (5* in 4) and Van Der Dussen (25* in 29) finished the first innings for their team. They had managed to get a total of 146 runs on the scoreboard after losing 6 wickets. As a result, England now needed to chase just 147 runs if they wanted to win the series.

Jason Roy and Jos Buttler opened the innings for England as usual and they were looking forward to chase the total calmly. However, in the 4th over, Roy (14 in 19) got out. Consequently, David Malan came in at 3. He settled in quite well with Buttler but their partnership was broken by Shamsi. In the 8th over, Buttler (22 in 15) got out. After that, just 2 overs later i.e. in the 10th over, Jonny Bairstow (3 in 7) got dismissed. As a result, Ben Stokes came to the crease. He didn’t play much but chipped in 16 runs in 13 balls before getting out in the 14th over. After that, Eoin Morgan came in at 6 to support Malan from the other end of the crease. England now needed 50 runs in just 5 overs to seal the win.

However, after playing a good knock even Malan (55 in 40) got out in the 18th over. As a result, Sam Curran came to the crease but even he got out in the last over. So, Chris Jordan came in at 9 to finish the chase for his team. He (Jordan- 3* in 3) helped England seal the win along with Eoin Morgan (26* in 17) to win the match in 19.5 overs. The Englishmen had won the T20I series with a win in the second T20. It was their second consecutive win against South Africa in the series. David Malana won the Man of the Match award for his outstanding knock of 55 runs in just 40 balls. Anyhow, now South Africa has a chance to win at least one match in the series on 1st December or else England will whitewash them to win the series.