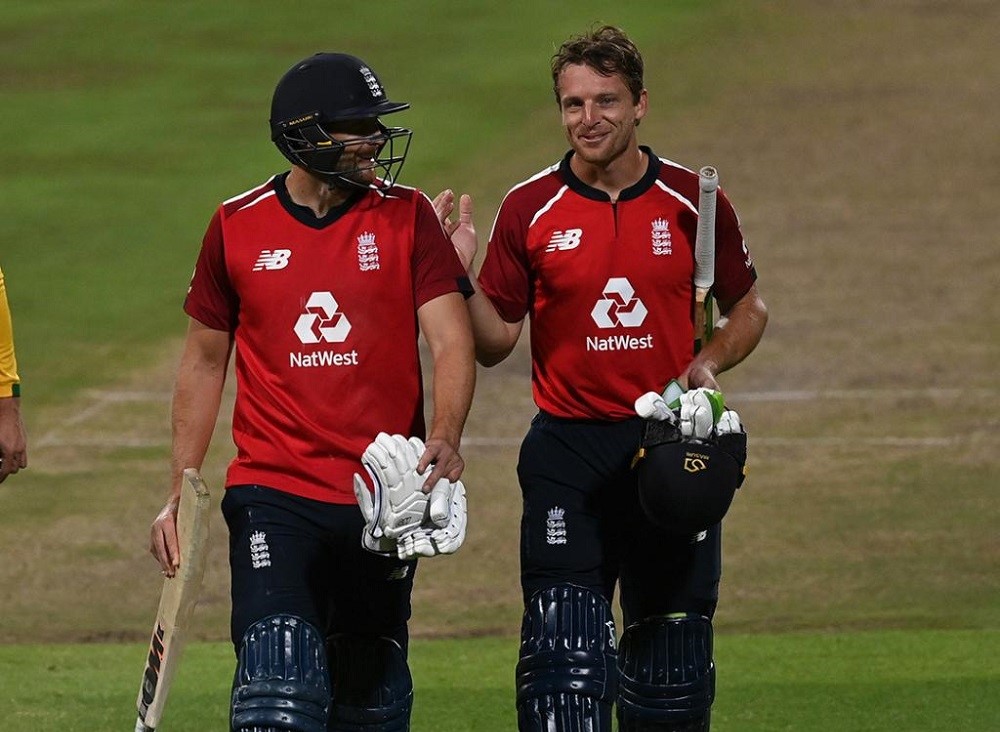 England whitewashed South Africa in the T20I series as Dawid Malan (left) and Jos Buttler (right) guided the Englishmen to an easy victory.

England tour of South Africa began on 27th November as the Englishmen took on the Proteas in a limited-overs tour. The visitors won the 1st T20I by 5 wickets to take an early lead of 1-0 in the series. Jonny Bairstow played an excellent innings scoring 86 runs in just 48 balls. After that, the countries played the second match as it was a do-or-die match for the hosts. However, the Proteas went on to lose even that match and England won the series by 2-0. However, now it was time for the last and final T20I of the series. This was going to be really interesting as the hosts would give their best to not get whitewashed whereas England had a chance to climb to the #1 spot on T20I team rankings. So, let us see what happened during the match.

South Africa won the toss for the first time in the series but opted to bat first. In the previous matches also the hosts had batted first but went on to lose the game. However, this time, they themselves had chosen to bat first. It seemed like their skipper Quinton de Kock wanted to set up a big target for the visitors to create some trouble for them. So, De Kock and Bavuma opened the innings for South Africa as always. They got off to a great start as they were thrashing the England bowlers. However, in the 5th over, De Kock (17 in 12) lost his wicket to Chris Jordan. So, Reeza Hendricks came in at 3. He was just settling in but then in the 8th over, Bavuma (32 in 26) got out. Just 2 overs later, Hendricks (13 in 14) also got dismissed.

As a result, now Faf du Plessis and Van der Dussen were on the crease. The duo were settling in slowly and steadily on the crease. In fact, once they were set, they started smashing boundaries one after the other to complete their 100-run partnership in just 56 balls. They went on to finish the innings for South Africa as they managed to get a total of 191 runs on the scoreboard after losing 3 wickets. Du Plessis had scored 52* in 37 balls whereas Van Der Dussen had smashed 74* runs in just 32 balls. As a result, now England needed 192 runs in 20 overs if they wanted to whitewash South Africa in the T20I series.

The second innings began and just like always, Jason Roy and Jos Buttler opened the innings for England. However, the former (Roy- 16 in 14) was unable to make much impact as he got out in the 4th over only. Consequently, Dawid Malan came in at 3. He settled in quite well and really soon with Buttler. The duo were thrashing the South African bowlers as they were moving closer and closer to the target, They managed to build an unbeaten 100-run partnership in just 63 balls. They had managed to get a good partnership and were now looking to seize the victory for their side.As a result, in just 17.2 overs they managed to chase a whopping 192-run target.

England had seized the third victory in the third T20I to whitewash the Proteas at their own home ground. Dawid Malan (99* in 47) and Jos Buttler (67* in 46) had played some tremendous knocks to help their side win the match. In fact, Dawid Malan went on to win his 2nd Man of the Match award in the series. He was honored for his unbeaten match-winning knock of 99 runs in just 47 balls. With this victory, England also climbed to the #2 position in the T20I team rankings. Anyhow, now the hosts (South Africa) have a chance to redeem themselves in the ODI series that will be starting on 4th December. So, do you think the Proteas will have their revenge or will England clinch a win in the ODI series too?