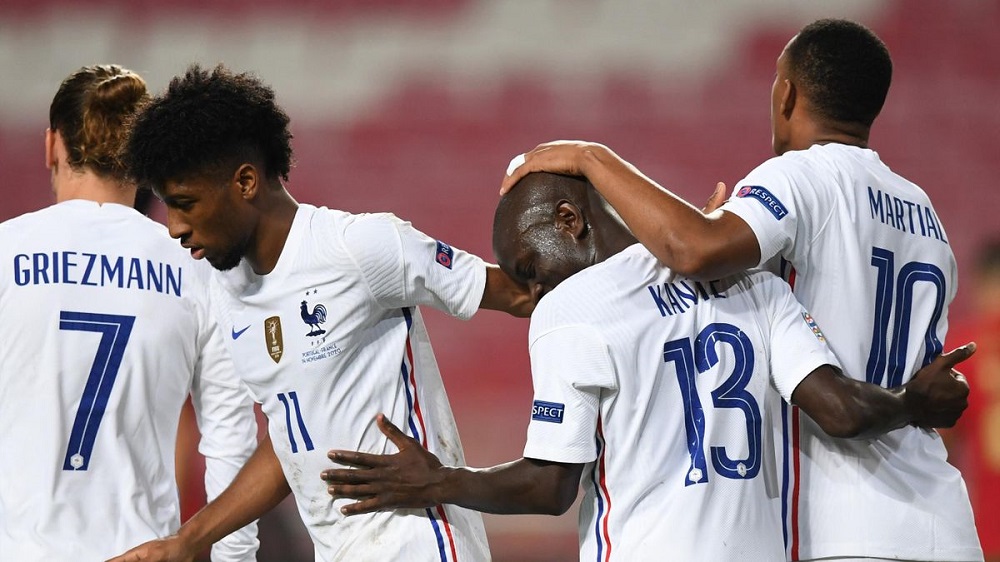 N'Golo Kante (2nd from right) celebrates with his teammates after scoring the winning goal for his team.

The international break is on and hence, the UEFA Nations League is back. After 4 matchdays, it was now time for matchday 5 of the league. It had been amazing until now as we had got to see some really thrilling and nerve-wracking matches. In fact, from the top teams losing to late goal victories, we had seen a lot in the Nations League. Anyhow, it was time for another amazing fixture as the defending champions of the UEFA Nations League, Portugal were going up against the 2018 FIFA World Cup winners, France.

Previously, when the two had met, the match ended in a goalless draw. However, it would be interesting to see as to which team could bag the 3 points from a victory or whether they would once again take 1 point each. Both teams were tied with 10 points as they had each won 3 matches and drawn one. So, a win in this match would put either of them 3 points ahead of the other one.

The match began as France kicked off. It was going to be thrilling as neither of France’s main strikers, Mbappe or Giroud was starting the game. In fact, Mbappe was not even a part of the squad due to an injury. Anyhow, the match had begun and both the teams wanted to play a possession game. As a result, both that good possession of the ball and were applying pressure on their opponents. From the start of the game, it looked like they both wanted an early goal. In fact, they were even creating good chances but neither of them was able to convert those. As a result, the referee whistled halftime with the score tied at 0-0.

Both the teams had played really well and they needed to step up in finishing if they wanted to win the game. So, the second half began and now both, Portugal and France were applying even more pressure. However, just like the first half, they were able to create chances but not convert them. Finally, in the 53rd minute, France broke the deadlock as N’Golo Kante scored the only goal of the game. Adrian Rabiot took a shot at the goal but was denied by Rui Patricio, the Portuguese goalkeeper. However, the save deflected the ball to N’Golo Kante who scored a simple tap-in goal to give his side a 1-goal lead.

France win 1-0 in Portugal to qualify for the "Final 4" of the Nations League 🇫🇷 🥳🎉#PORFRA #FiersdetreBleus pic.twitter.com/7rLml7rGOG

That was the only goal of the match as France emerged victorious in their clash against Portugal. However, Portugal did not give up that easily and gave their best to equalize. But, kudos to Hugo Lloris who made some excellent saves in both halves to lead his side to victory. With this win, France has now become the sole table toppers of League A Group 3. They are at 13 points, which is 3 points clear of Portugal who is at the 2nd position with 10 points. Anyhow, both the teams have confirmed their entry into the next round and it will be interesting to see if France finish at the top of the table or Portugal can overtake them after matchday 6. So, brace yourselves as Portugal will be facing Croatia in their next match whereas France will be up against Sweden.