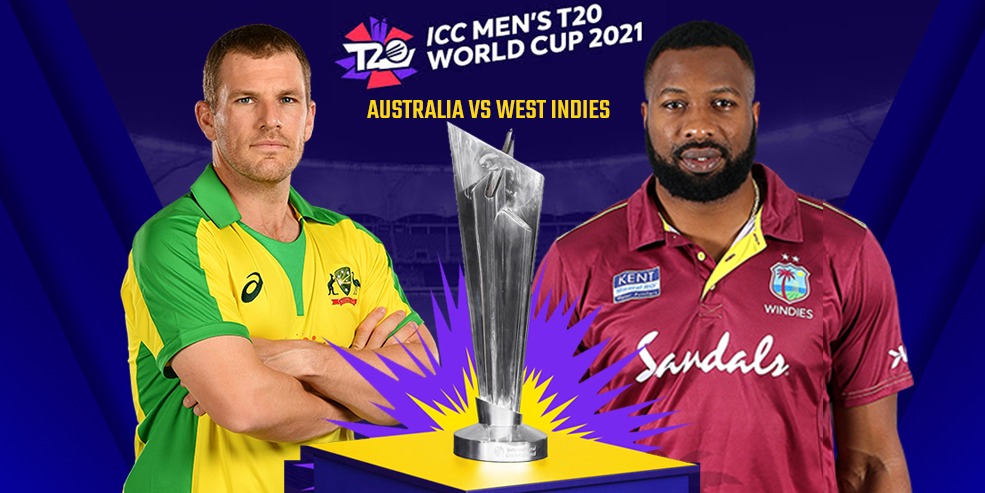 The following article is about the prediction of the match between Australia vs the West Indies. We all have our favorite sports. It does not matter that it is a popular sport or not and whether big teams are playing or not, if that sport is happening we start watching it. The same is happening for the cricket fans. With so much going on, it is difficult for us cricket fans to stay away from the television and mobile phones. The ICC Men’s T20 Cricket World Cup is ongoing, and we fans are happily failing to keep our emotions bottled up. Every day we are witnessing great matches with the players giving it they’re all for their country.

We have already entered the last stage of the tournament, and only a handful f matches remain. But the quality of the matches has only increased. Fans will be happier to know that another blockbuster match is going to take place in the tournament. Australia will face West Indies in group stage action. Both of these teams have their names etched in the history of cricket. Together they also have a lot of rivalries. It is only a matter of time to see how much further they can take the rivalry with this match. We have got our hands on the match details and are happy to share them with you. So keep on reading the article to know about the match details and predictions.

Australia vs West Indies: Where To Watch?

The live coverage of Australia vs West Indies will happen on Star Sports Select 1 and Star Sports Select 1 HD. The match is scheduled to take place on the 6th of November 2021. Both the teams belong to group 1 of Super 12, and their encounter is the 38th match of the tournament. Australia vs West Indies will begin at 3:30 P.M. according to the Indian Standard Time. For streamers, they can stream it online on the Disney+ Hotstar app and the Voot Select app. Sheikh Zayed Stadium in UAE is the venue of the match. For Hindi commentary, people can switch to Star Sports Hindi.

Australia vs West Indies: Players To Watch Out For

Australia was having a bit of a problem with team chemistry now that it is over, they are back to their majestic form. Apart from England, they have defeated all the other opponents. They are currently in the second position of group 1 with six points from 4 games. Australia is maintaining a good net run rate, and it is the only thing that is keeping Australia ahead of South Africa. Australia’s playing eleven is one of the most versatile teams to ever grace the 22 yards. World-class batsmen like David Warner and Aaron Finch and bowlers like Mitchell Stark and Josh Hazlewood make the Australian side one of the tournament favorites.

West Indies have won the T20 World Cricket World Cup and ODI Cricket World Cup twice. They were one of the strongest and most balanced teams in the world. But this year, they failed to prove their worth. Every other team has young and new players, but West Indies has been continuously playing their old players. No doubt, they are some of the best players in the game, but most of them are above 35 years old. Chris Gayle, Dwayne Bravo, Kieron Pollard, etc., helped West Indies win several trophies, but sometimes it is better to try new hands. West Indies are in the fifth position of group 1 and have only won one match. They have been knocked out of the tournament.

Also Read: India vs Afghanistan – When is India’s Next Match in WCT20?

Australia is known to have won the most number of ODI Cricket World Cup, and West Indies have won the most number of T20 Cricket World Cup. They need to win this match to qualify for the next round. If they lose, then South Africa winning their next game will knock them out. On the other hand, West Indies have nothing to lose. They will look to end the tournament on a good note. Chris Gayle is yet to show his true colors, this match could be his last T20 World Cup match, and he will like to capture the moment. Keeping hold of all the tabs, my prediction is that Australia is going to win the match. But it is impossible to say it with confidence as anything can happen. Only time reveals the truth.