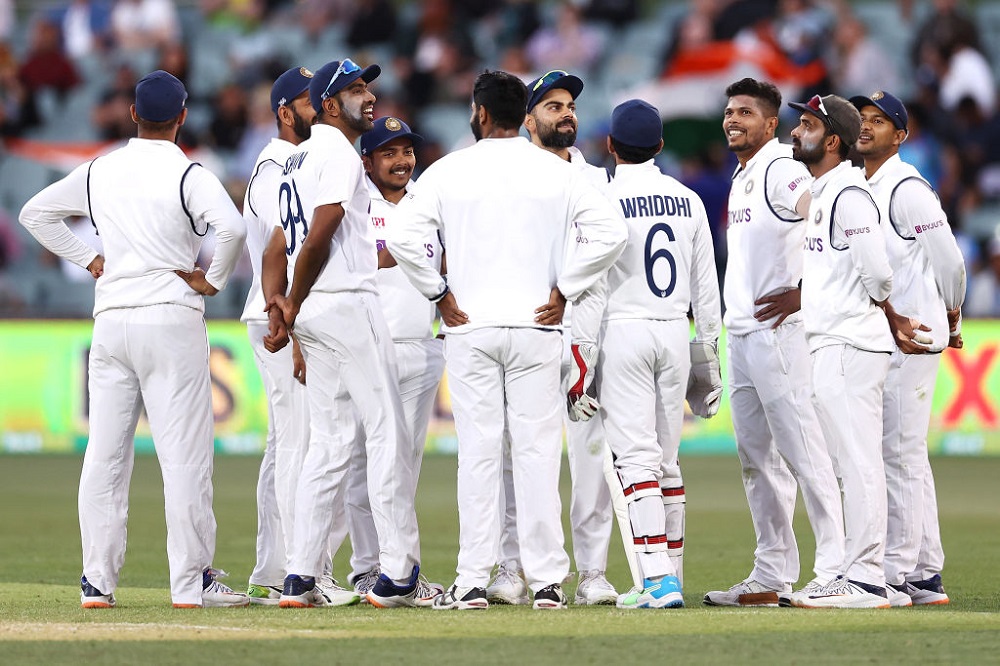 The Indian bowling attack stunned the Australian batsmen as they dismissed them in just 72.1 overs.

Day 2 for the first test match between India and Australia was filled with dismissals. On Day 1, India won the toss and opted to bat first. They were playing a good innings but it was spoilt for the fans when due to an error from Ajinkya Rahane, the Indian skipper Virat Kohli got run-out. Soon after that, Rahane also got out. However, at the end of Day 1, the Indian team had managed to get their total to 233-6. So, it was time for them to pick up from where they left. As a result, Wriddhiman Saha and Ravichandran Ashwin came to the crease.

Wriddhiman Saha and Ravi Ashwin came to start off day 2. However, in the 1st over itself, Ashwin (15 in 20) got out. Then, in the 91st over, Saha (9 in 26) lost his wicket to Starc. As a result, now India had lost 8 wickets and not even managed to get their score of the day to double digits. After Saha and Ashwin’s dismissal, Umesh Yadav and Jasprit Bumrah came to the crease. However, in the 93rd over, Umesh (6 in 13) also got out. Consequently, India’s last batsman Mohammed Shami came in at 11. But, even he failed to deliver as Cummins dismissed him in the 94th over. As a result, India’s innings came to an end with just 5 overs bowled on the opening of session 1 of Day 2. They had put up a total of 244-10 on the scoreboard.

Now, Australia needed to score 245 runs to get a lead from India. Australia’s 1st innings began as Mathew Wade and Joe Burns came to open for them. They were playing defensively and slowly as they did not want to lose their wicket. However, in the 15th and 17th over, Bumrah struck one after the other to dismiss Wade (8 in 51) and Burns (8 in 41) respectively. As a result, Marnus Labuschagne and Steven Smith came to the crease. They had just started settling in well but Ashwin struck to dismiss Smith (1 in 29). After that, the 34-year-old spinner took two more wickets to dismiss Head (7 in 20) and Green (11 in 24) respectively. However, the pressure on India was building as Labuschagne was playing really well.

However, finally in the 54th over, Umesh Yadav dismissed Labuschagne (47 in 119) and Cummins (0 in 3) in the same over to give India a major breakthrough. Therefore, Tim Paine and Mitchel Starc were now on the crease. However, it didn’t take the Indian bowlers long to dismiss the rest of the Australian players. Tim Paine did do some damage but the Indians had managed to get a 53-run lead from the first innings. Paine (73* in 99), Starc (15 in 16), Lyon (10 in 21), and Hazlewood (8 in 10) chipped in a few runs to help Australia put a total of 191-10 on the scoreboard in the 72.1 overs that they played. Anyhow, there was still some time, so India started off with their second innings.

There was still half an hour for the end of day 2. Consequently, Mayank Agarwal and Prithvi Shaw opened the innings for India once again. They got off to a great start. They were playing defensively but in the 4th over, Shaw (4 in 4) got bowled for the second time in this match. As a result, India sent Jasprit Bumrah in at 3. Many were shocked by this decision but Kohli had sent him in as a night watchman. Basically, when the day is about to end and conditions are adverse, an inferior batsman is sent into play. This is done in order to avoid the dismissal of a better batsman. Anyhow, with this Day 2 came to an end as Bumrah was at o* in 11 and Agarwal had scored 5* in 21 balls.

India had managed to score 9 runs and lose an early wicket at the end of Day 2. With this, they had taken a lead of 62 runs over the host. Now, India will be looking forward to bat through the entire Day 3 and score at least 350+ runs to take their lead against Australia to 400+. After that, they might declare to try and defend that 400+ target in the last two days that they’ll have. Otherwise, the first test match will end in a draw. Anyhow, stay tuned for further updates on the next day.