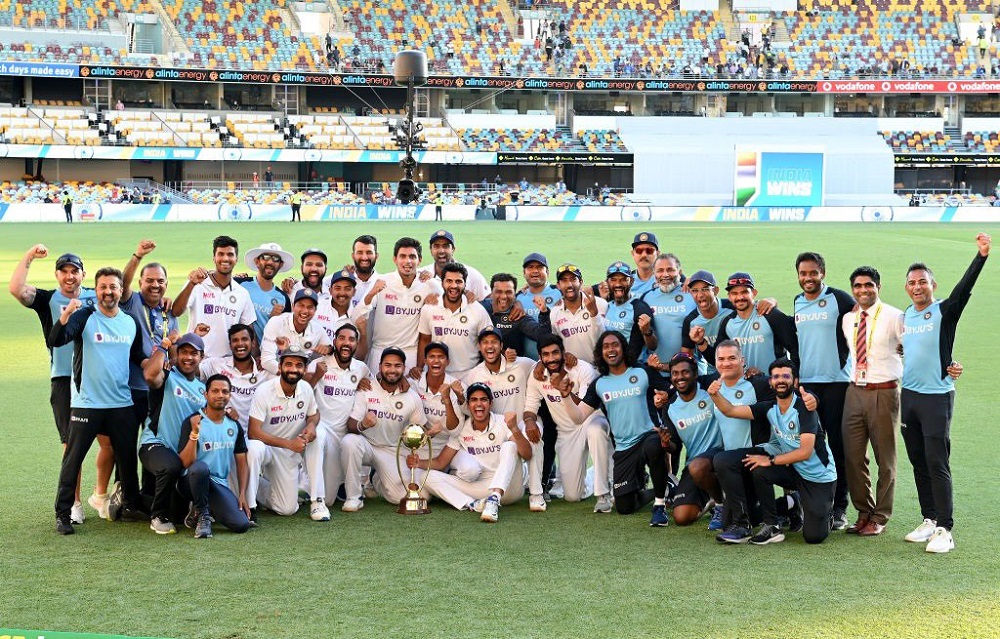 India crushed Australia at the Gabba to win the 4th Test match as they won the Border-Gavaskar Trophy once again.

19th January 2020 will go down as one of the best days in the history of Indian cricket. India started their tour of Australia on 27 November 2020 with the Dettol ODI Series. They lost that to the hosts but made a brilliant comeback to win the Dettol T20I Series. Consequently, it all came down to the Vodafone Test Series whose winner would get the Border-Gavaskar Trophy. However, India didn’t really get a great start as they crumbled down in the 1st Test match against Australia. But, they made an extraordinary comeback to win the next i.e. the 2nd Test match. After that, they showed great composure once again to draw the 3rd Test match. As a result, it all came down to the 4th and final Test match of the series. So, let us see how this panned out for both teams.

The match began on Day 1 with Australia winning the toss and choosing to bat first. Their intentions seemed pretty clear. They wanted to set up a big total and then put team India’s batting lineup under test. However, they didn’t really get a huge total on Day 1 but managed to score 274 runs after losing 5 wickets in 86 overs. Marnus Labuschagne was the hero of the day as he led Australia with his powerful knock of 108 runs in 204 balls before getting dismissed. Apart from him, Smith (36 in 77), Wade (45 in 87), Paine (23* in 62), and Green (28* in 70) also contributed to this total at the end of Day 1.

Cameron Green (47 in 107) and Tim Paine (50 in 104) to the crease on Day 2 to continue Australia’s innings. However, they failed to deliver much as the Indian bowlers performed really well. The visitors had managed to get the hosts all-out for a total of 369 in 115.2 overs. The tailenders from Australia had done a good job to get their side to this score. Anyhow, now India needed 370 runs to take the lead from Australia in their first innings.

Rohit Sharma and Shubman Gill opened the innings for India once again just like the previous Test match. However, this time expectations were high from them. However, they failed to deliver much as Gill got out early and Rohit also got dismissed after scoring 44 runs in 74 balls. Consequently, Cheteshwar Pujara and Ajinkya Rahane remained on the crease till the end of Day 2 session 2 as rain stopped the play for the remaining day. India had managed to score 62 runs and were now trailing by 307 runs.

Rahane and Pujara came to the crease at the beginning of Day 3 to continue with India’s 1st innings. They were standing strong but soon their partnership was broken and slowly the Indian batting lineup collapsed. Pujara (25 in 94), Rahane (37 in 93), Agarwal (38 in 75), and Pant (23 in 29) had all chipped in with some runs to their team’s innings. However, then came Washington Sundar (62 in 144) and Shardul Thakur (67 in 115) who built a beautiful 123-run partnership to give India a boost. Finally, Australia managed to get India all-out for a total of 336 runs, and consequently, they were now leading by just 33 runs.

Australia began their 2nd innings on Day 3 itself but was only able to bat for 5 overs. David Warner and Marcus Harris had come to the crease and were playing some good shots. However, they managed to score 20 runs from those overs to extend their lead to 53 runs over the visitors.

Australia continued with their 2 innings on Day 4 as Warner and Harris took on the Indian bowlers. They built a good 89-run partnership before Harris (38 in 82) got out. After that, Australia’s lineup started crumbling down slowly. However, all the players manage to chip in with some quick runs from their wicket. Smith was the highest scorer for the team as he smashed 55 runs in 74 balls. Apart from him, Warner (48 in 75), Labuschagne (25 in 22), Green (37 in 90), Paine (27 in 37), and Cummins (28* in 51) contributed really well to the team’s total. As a result, India had managed to restrict Australia to a total of 294 runs, but this time in just 75.5 overs.

India needed 328 runs to win this match now and hence, Rohit Sharma and Shubman Gill came to the crease once again. However, after scoring just 4 runs off the 1.5 overs played, Day 4 of the Test match had to be called off with stumps. This meant that now India needed 324 runs on the last day i.e. Day 5 of the 4th Test match to win the Vodafone Test Series and retain their hold over the Border-Gavaskar Trophy.

Shubman Gill and Rohit Sharma continued with India’s innings on Day 5 as they came to the crease with the intent of chasing 324 runs. However, they couldn’t really build a good partnership as Rohit got out in the 9th over. Consequently, Cheteshwar Pujara came to the crease and was settling in really well with Shubman Gill. The duo built a fantastic 114-run stand before Gill (91 in 146) got out. As a result, Ajinkya Rahane came to the crease.

The skipper (Rahane- 24 in 22) got in form real quick but Cummins struck once again to dismiss him. Consequently, now Rishabh Pant came to the crease and the fans had high hopes from him. was settling in well as he was defending his wicket well and even getting runs at the same time. However, in the 81st over, Pujara (56 in 211) got out when India needed just 100 runs from approximately 20 more overs.

As a result, then came Mayank Agarwal but soon even he got out after scoring 9 runs from 15 balls. Then, Washington Sundar came in at 7 and he got India back into the game just when Australia had started dominating. He scored a quick 22 in 29 to get put the pressure on the hosts. However, he couldn’t finish off the game for his side as he got out in the 96th over.

After Sundar’s dismissal came Shardul Thakur who scored 2 runs in balls and got out in the very next over. So, Navdeep Saini (0* in 0) came to the crease to finish off the chase along with Rishabh Pant. Pant smashed a four in the 97th over to lead India to victory over Australia. His stellar 138-ball 89-run knock had helped the visitors to chase the massive target. As a result, India won the the match and therefore, they won the series by 2-1. With that, they retained the Border-Gavaskar Trophy as they registered a historic Test Series win over Australia.

The young squad had shown great sportsmanspirit under the captaincy of Ajinkya Rahane to first comeback after the shameful defeat and then, draw the second match. Finally, they won the 3rd Test match with a young and not much experienced squad but the players had worked hard and truly deserved this. Anyhow, the Indian players will now be returning to India after spending 2 months in lockdown i.e. in a bio bubble in Australia. However, you don’t need to get upset as soon the Men in Blue will be locking heads with England as the latter are coming for a tour to India.