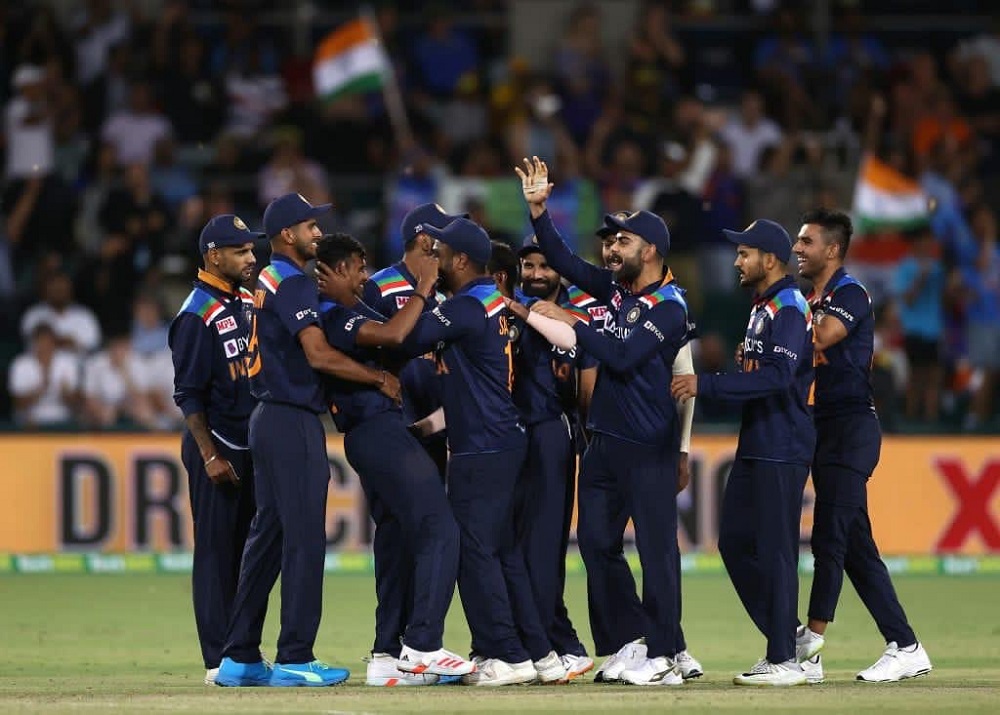 India defeated Australia to win the 1st T20I as Jadeja and Chahal were the stars of the match.

The Dettol T20I Series between India and Australia began on 4th December. The India tour of Australia started on 27th November, with the hosts winning the ODI series by 2-1. However, the visitors managed to get a win in the last ODI as a consolation. Anyhow, it was now time for the Dettol T20I Series to start. Both the teams were looking in great form as they were looking forward to win the first T20I to grab an early advantage. So, they brought in their best players to battle it out.

Everyone was shocked to see team India’s playing 11. Their skipper Virat Kohli had left out 2 of his star bowlers i.e. Jasprit Bumrah and Yuzvendra Chahal. However, people kept faith in their captain. They were determined that team India would win. On the other hand, the Australian fans were happy with their playing 11 and they were celebrating with their new jersey. Anyhow, the match began as Australia won the toss and opted to bowl first. Earlier, in the ODIs, Australia had opted to bat first after winning the toss but here, Finch chose to bowl first because he wanted to restrict India to a low total.

The Barefoot Circle respectfully acknowledges our First Nations people, the traditional owners of the land, and pays respects to the country #AUSvIND

Shikhar Dhawan and KL Rahul came to open the innings for India. They got off to a decent start until the 3rd over when Dhawan (1 in 6) got out. Consequently, Virat Kohli came in at 3. He was settling in really well with Rahul. They even managed to get 42 runs from the powerplay after losing 1 wicket. However, just after the powerplay in the 7th over, Kohli (9 in 9) lost his wicket to Swepson. As a result, Sanju Samson came to the crease to support Rahul from the other end. However, even he got out in the 12th over after smashing 23 runs in 15 balls. In the very next over, Zampa dismissed Manish Pandey (2 in 8) with a brilliant delivery. Consequently, Hardik Pandya came in at 6. However, in the 13th over, Rahul (51 in 40) got out.

As a result, now Hardik Pandya and Ravindra Jadeja were on the crease. But, Pandya only managed to score 16 runs in 15 balls before getting out in the 17th over. After that, Ravindra Jadeja was trying to build a partnership with Washington Sundar. In the 19th over, the ball hit Jadeja on his helmet. He seemed to be injured by that. However, he continued playing and smashed the Australian bowlers after that. In the 20th over, Sundar (7 in 5) got out but Jadeja (44* in 23) still managed to get a total of 161-7 for India on the scoreboard along with Deepak Chahar (0* in 0). As a result, now Australia needed to chase 162 runs in their 20-over innings if they wanted to win the 1st T20I.

The second innings began as D’Arcy Short and Aaron Finch opened the innings for Australia. However,  everyone was stunned by what happened next. Yuzvendra Chahal came on as a concussion substitute for Ravindra Jadeja. Apparently, in the 19th over when the ball had hit Jadeja’s helmet, he had suffered from a concussion. The Indian physio had declared so when Jadeja returned to the dressing room after the first innings. That was a huge blow for Australia as now Chahal would bowl instead of Jadeja. The Australian coach Justin Langer even had a verbal dispute with the match regarding this but eventually, he walked away unhappy with the decision. Anyhow, the match began and Australia was looking in a good form as they were thrashing the Indian bowlers. In fact, they managed to score 53 runs from the powerplay itself.

However, finally in the 8th over, Chahal got India their first breakthrough. He dismissed Aaron Finch (35 in 26) as Hardik Pandya took a brilliant catch. After that, in the 10th over, Chahal struck again as he got Steven Smith’s (12 in 9) wicket. Now, India were looking in a good form as the concussion substitute Chahal got them 2 wickets out of nowhere. In fact, they went on to get another wicket of Glenn Maxwell (2 in 3). The Australian all-rounder lost his wicket to the debutant T. Natarajan. However, the danger for India continued as D’Arcy Short was playing really well. Consequently, Moise Henriques came to the crease to support D’Arcy Short. But, soon in the 15th over, Short (34 in 38) also got out. Now, all hopes were on Moise Henriques and Mathew Wade as Australia needed 49 runs in just 30 balls.

Three wickets apiece for Natarajan and Chahal as #TeamIndia take a 1-0 lead in the three-match T20I series.@yuzi_chahal is adjudged Man of the Match for his brilliant figures of 3/25.#AUSvIND pic.twitter.com/mvq3Kl8esa