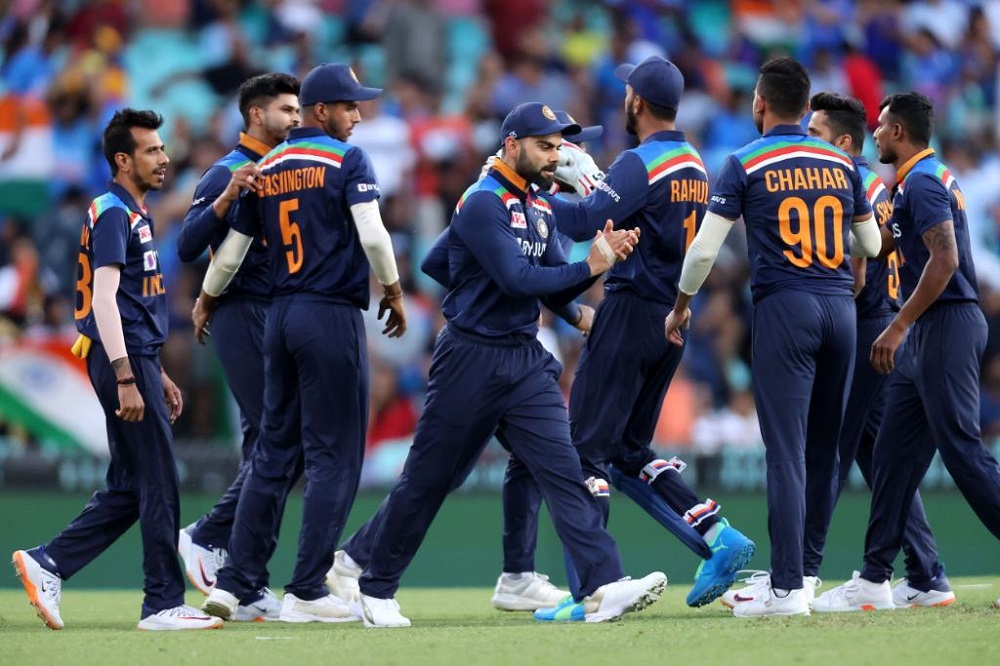 The Dettol T20I Series between India and Australia began on 4th December. The former traveled all the way to Australia for an all-format tour after the conclusion of IPL 2020. The visitors went on to win the first match of the series after a huge controversy. Yuzvendra Chahal came on as a concussion substitute for Ravindra Jadeja and won the match for India after a brilliant spell. He took 3 crucial wickets in 4 overs after giving away just 25 runs. Anyhow, it was now time for the 2nd T20I and India was looking forward to win the series against Australia with a victory in this match. On the other hand, Australia desperately needed a win in this match if they wanted to stay alive in the competition. However, it was going to be difficult for them as Aaron Finch and Mitchell Starc were not playing now.

The match started as India won the toss and their skipper Virat Kohli opted to bowl first. They wanted to restrict Australia to a low total. Also, he knew Aaron Finch and David Warner were not present, so he wanted to create pressure on them. However, that did not quite happen as Australia got off to a great start. The new skipper Mathew Wade and D’Arcy opened the innings for the hosts. They were playing brilliantly as they were thrashing the Indian bowlers. Finally, in the 5th over, Natarajan dismissed D’Arcy (9 in 9) to get India their first breakthrough. Consequently, Steven Smith came in at 3. He settled in really well with Wade as they were smashing boundaries one after the other. However, in the 8th over,  Wade (58 in 32) got out. As a result, Glenn Maxwell came to the crease to support  Steven Smith.

The former chipped in 22 runs in just 13 balls before getting out in the 13th over. After that, Moise Henriques came in at 5. He was playing some good shots and kept rotating the strike with Smith who was just scoring runs non-stop. Finally, in the 18th over, Chahal dismissed Smith (46 in 38) to get his first wicket of the match. In the very next over, Henriques (26 in 18) also got out. As a result, Marcus Stoinis (16* in 7) and Daniel Sams (8* in 3) were on the crease now. However, they didn’t lack confidence and scored some good runs in the final overs to get Australia’s total to 194-5. It was a great score as after Henriques’ dismissal, the hosts were still at 171-5 in 18.3 overs. Consequently, now India needed 195 runs in 20 overs if they wanted to win the Series.

The second innings began and KL Rahul and Shikhar Dhawan opened for India. They got off to a great start as they were thrashing the Australian bowlers. However, in the 6th over, KL Rahul (30 in 22) got out. Then came Virat Kohli but Rahul had done a great job as now Kohli and Dhawan were on the crease. India had managed to get 60 runs from the powerplay itself. So, Kohli and Dhawan were focused on defending their wicket now and maintain the run-rate simultaneously. They did a great job in doing so until the 12th over when Dhawan (52 in 36) got out. Consequently, Sanju Samson came to the crease. However, he smashed 15 runs in just 10 balls and soon got out in the 14th over. So, Hardik Pandya came in at 5 to support Virat Kohli from the other end of the crease.

However, in the 17th over, Virat (40 in 24) also lost his wicket to Daniel Sams. Therefore, Shreyas Iyer came to the crease. Now, all the fans were hoping for a miracle from Shreyas Iyer and Hardik Pandya as India needed 46 runs in just 23 balls. However, the youngsters did not take much pressure and played confidently. They thrashed the Australian bowlers to get the target down to 14 runs off 6 balls. However, Hardik Pandya went on to prove why he’s one of the best finishers in the world today. He finished the chase by smashing 14 runs in just 3 balls. He took a double on the first ball and then smashed two sixes to take India’s total to 195-5. Hardik (42* in 22) and Shreyas (12* in 5) had helped India win the series with their brilliant partnership.

With a win in the second T20I too, India had managed to defeat Australia and win the Dettol T20I Series trophy. Hardik Pandya won the Man of the Match award for his unbeaten match-winning knock of 42 runs in just 22 balls. Anyhow, the teams will now be going up against each other once again on 8th December for the third and last T20I of the series. It will be interesting to see whether the visitors can get a clean sweep once again or Australia will win consolation with a victory in the last match of the series.

A well deserved Man of the Match award for @hardikpandya7 for his match-winning knock of 42*#TeamIndia take an unassailable lead of 2-0 in the three match T20I series.#AUSvIND pic.twitter.com/mlC3e3RSN9