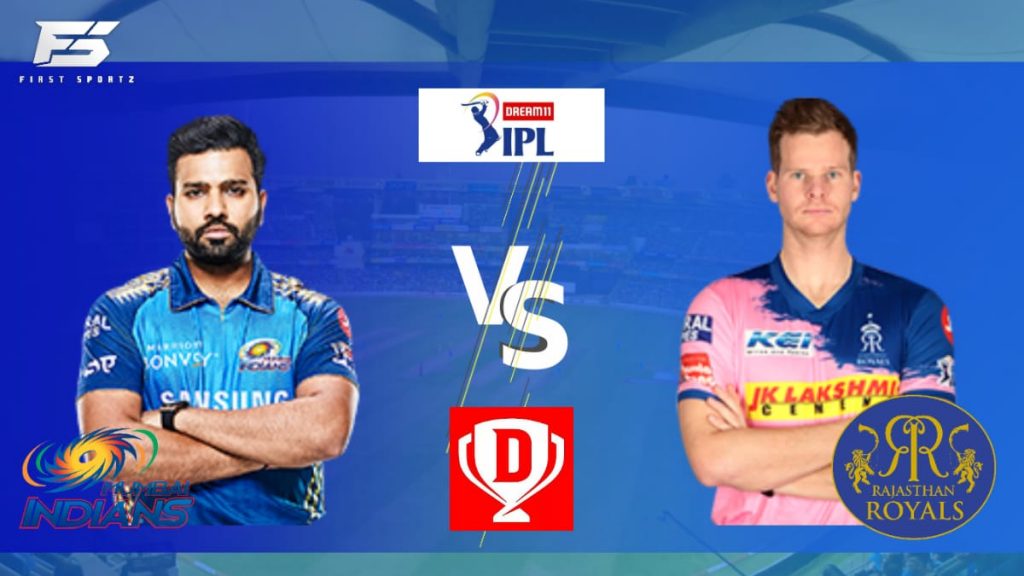 Today, Mumbai Indians played very well and gained one more consecutive win and made their place at the table’s top. Also, one of the worst performances of RR’s batters was delivered today, and this was not at all expected from the team. One of their major mistakes is not taking one of the best Indian batsman, Robbin Uthappa, in the playing 11 as he can be a good middle-order batsman.

So, this match started with MI winning the toss and opting to bat first. This was an excellent decision of MI captain Rohit Sharma. So, as usual, Rohit Sharma and De Kock came to open, and responsibility of first over was given to Ankit Rajpoot. Only De Kock got out on 23 runs in 15 balls in the powerplay, and then SuryaKumar Yadav came to bat.

He has given such a tremendous performance and thus also won the player of the match award. The match was going all good for MI, but in the 10th over, they lost two wickets together, which was a major shock for the team and its fans.

In the 10th over, Rohit Sharma got out at 35 runs in 23 balls, and Ishan Kishan got out on a duck. Ishan Kishan moved his bat with a really wrong intention and thus got caught by Samson. But still after this over, MI made a good comeback.

After that, Suryakumar Yadav and the elder Pandya brother were playing on the ground. Krunal got out after scoring 12 runs in 17 balls, and after that, Hardik Pandya came to bat.

Now it was RR’s turn to chase the big score of 193 to win the match. But we think luck was not on RR’s side today, and thus everyone except Butler kept losing their wickets. From Rajasthan Royals, the young Indian talent, Yashasvi Jaiswal, again got a chance to play, but he really failed to give a good performance and got out on zero.

Within the powerplay, RR lost three important wickets, and thus the hope of winning the match was reduced to 50% for RR and its fans. Yashasvi Jaiswal got out on 0 in 2 balls, Smith got out on 6 runs in 7 balls, and Samson also got out on 0 in 3 balls. From RR, it was only Butler who scored good runs else everyone got out very early.

RR lost all the 10 wickets and also lost the match by 57 runs. After this match, MI reached the top of the points table, and RR slipped down to the second last position on the points table. This was one of the worst performances of the Rajasthan Royals.