Kapil Dev Discharged From The Hospital After Surgery 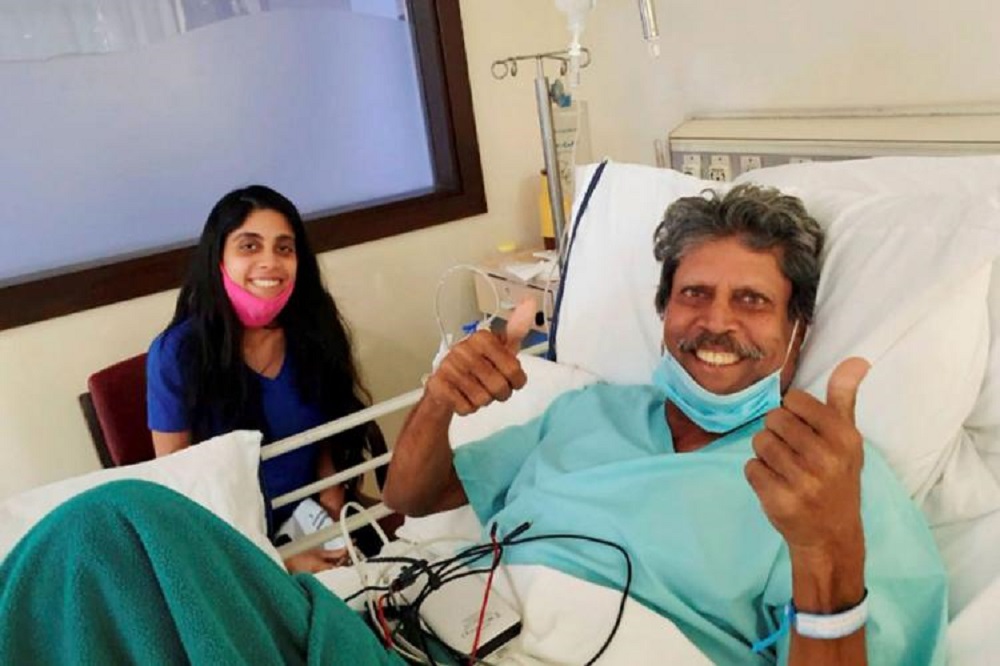 Former Cricketer Kapil Dev has been discharged from the hospital after a successful surgery.

The former Indian cricketer Kapil Dev who brought the first ICC World Cup in India was recently hospitalized. On Thursday, Dev had started complaining about chest pain. So, his family took him to Fortis Escorts Heart Institute. After being admitted, he had a heart attack and they asked him to undergo a surgery. He had an angioplasty done and the doctors discharged him just a day before. Dr. Atul Mathur stated that he is fine and healthy. He can continue his daily routine but must visit the hospital for regular check-ups. Dr. Mathur is the Director of the Cardiology Department and is the one who performed the surgery. Angioplasty is done so that the blood flow is maintained not causing cardiac arrest.

How did the former cricketer’s friends and fans react to this news?

Many of Kapil Dev’s friends also expressed their concerns through their social media. Chetan Sharma shared a picture with him stating that he is healthy and fine. All his fans had wished him a speedy recovery. Twitter soon got flooded with messages and prayers from his fans. Post-retirement, Kapil Dev has been working in many different businesses. He had hotel and restaurant chains. He also started Dev Musco Lighting Pvt. Ltd. where they install and produce floodlights for stadiums. There is no history regarding his health conditions.

Wishing the big-hearted, mighty Kapil Dev a speedy recovery. So much more to do.

Concerned to learn that the legendary #KapilDev has suffered a heart attack & is in hospital. His mighty heart won many a battle for India. Wishing him the very best in winning this one too.

Who is Kapil Dev?

Born on 6th January, 1959 Kapil Dev Nikhanj is one of the greatest cricketers in Indian cricket. He was one of the best all-rounders and is the greatest captain of the Indian team winning the 1983 World Cup. In 2002, Wisden, an annually published cricket reference book gave him the title of the ‘Indian Cricketer of the Century’. He holds the record for maximum wickets in test. His fast bowling technique allowed him to take more than 400 wickets and hard-hitting batting helped him to score more than 5000 runs. Kapil Dev started playing cricket in his high school. Then, he went on to play for the Haryana team where he impressed everyone taking around 121 wickets over the course of 30 matches. They also ended up winning the Ranji Trophy Championship.

In 1978, he made his debut in international cricket playing his first test match. He emerged as one of the best bowlers playing numerous tests taking many wickets. In 1982, he replaced Sunil Gavaskar as the captain of the team. India won its first World Cup beating West Indies in the finals under his captaincy. In 1987, he returned as the captain but lost in the semi-finals. Also, a lot of misunderstanding happened between him and Gavaskar due to difference in opinions. Kapil Dev got married to Romi Bhatia in 1980 and has a daughter named Amiya Dev in 1996.

In 1994, he announced his retirement from international cricket. In 1999, BCCI appointed him as the coach of the national team as a successor of Anshuman Gaekwad. However, he resigned after a betting controversy came to light. He then returned as a consultant and was the Chairman of the National Cricket Academy. In 2008, he joined the Indian Territorial Army (ITA) as Lieutenant Colonel. In 2019, the Sports University in Haryana appointed him as its first chancellor. He has also written books such as ‘By God’s Decree’, ‘Cricket My Style’, ‘Straight from the Heart’ and the ‘We, The Sikhs’. A movie regarding his life is also under production starring Ranveer Singh.