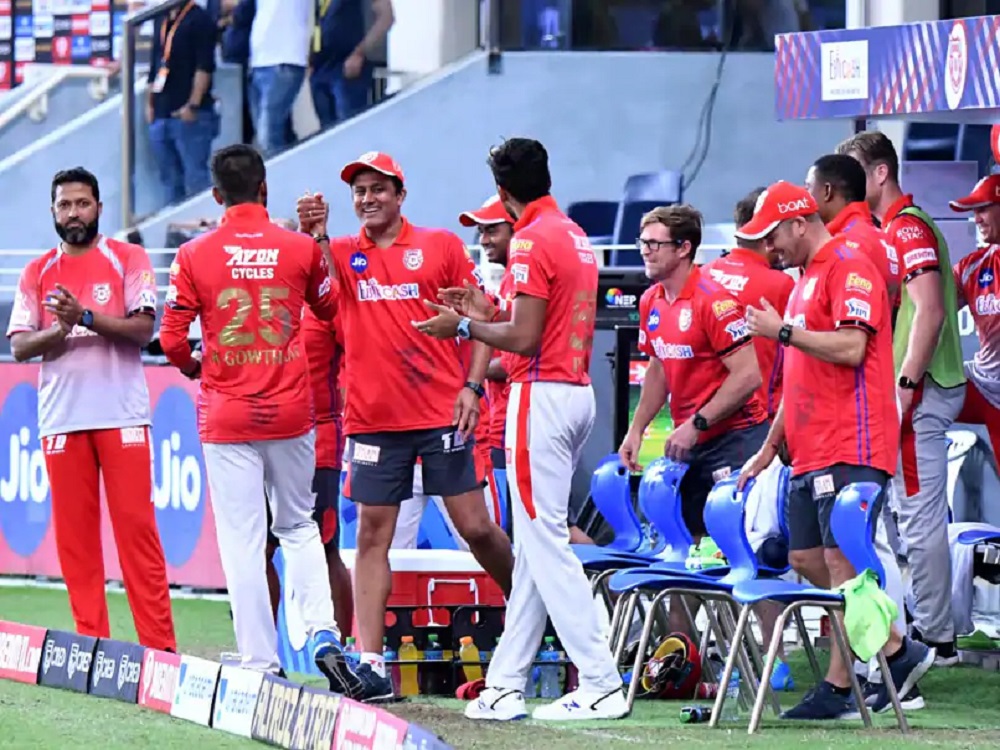 Kings XI Punjab continued their winning-streak as they surprised everyone with a win against Sunrisers Hyderabad.

Kings XI Punjab and Sunrisers Hyderabad, are two of the best teams in the history of IPL. Even though the former has won none and the latter has won only 1 title, these are two teams that have always given great competition to the other teams. Now, it was time for both of them to get head-to-head against each other. KXIP were on the 6th position whereas SRH was just above them in the 5th position. Both had 8 points, so a win would put one of them 2 points ahead of the other. So, it was definitely going to be an interesting match because they were playing to qualify for the playoffs. As a result, it was nothing short of a do-or-die match.

Sunrisers Hyderabad won the toss and their skipper David Warner chose to bowl first. However, this decision did not go much in SRH’s favor as the KXIP opening duo was smashing the SRH bowlers. But, in the 5th over, Sandeep Sharma dismissed Mandeep Singh (17 in 14) to give his team a breakthrough. After that, Chris Gayle came to support KL Rahul from the other end. He was playing really slow and managed to hit only 20 runs in 20 balls before losing his wicket to Jason Holder in the 10th over. In the very next over, Rashid Khan helped SRH by dismissing KL Rahul (27 in 27). As a result, Nicholas Pooran and Glenn Maxwell came to the crease.

KXIP had only scored 66 runs in 10.1 overs after a loss of 3 wickets. If Punjab wanted to win this match, they needed more runs. Maxwell and Pooran were trying to do so but Maxwell (12 in 13) soon got out in the 14th over. Then came Deepak Hooda (0 in 2), who got ducked by Rashid Khan in the 15th over. It felt like KXIP could hardly even set a target of 100. As a result, Chris Jordan came to support Pooran (32* in 28) from the other end. However, Jordan (7 in 12) soon lost his wicket to Holder in the 18th over. In the very next over, Murugan Ashwin (4 in 4) also got out. With that, KXIP’s innings came to an end as they had scored 126 runs after losing 7 wickets. This was a really bad score because Kings XI Punjab had some great batsmen. However, none of them had performed today.

David Warner and Jonny Bairstow came to open the innings for SRH as always. They seemed determined to win the game. They wanted to finish it as soon as possible so they could increase their net run-rate. So, Warner was thrashing the KXIP bowlers as he hit 2 sixes and 3 fours in the powerplay. However, just after the powerplay, in the 7th over Ravi Bishnoi dismissed Warner (35 in 20). But, he had done his job as SRH had scored 52 runs from the powerplay without losing any wicket. However, in the very next over after his dismissal, Jonny Bairstow (19 in 20) also got out. Then, Warner sent Manish Pandey and Abdul Samad to the crease. The duo was just trying to settle in when Shami got KXIP Samad’s wicket (7 in 5).

So, Vijay Shankar came in at 5 after Samad’s dismissal. Shankar was taking it slow and steady whereas Manish Pandey was playing too defensively because he knew that they need to save wickets now. SRH were 67-3 in 8.5 overs. Then in the 17th over, Manish Pandey (15 in 29) got out. In the very next over, Vijay Shankar (26 in 27) also got dismissed. Now, it felt like SRH was just going tumbling down. In the 18th over, Jordan dismissed Holder (5 in 8) and Rashid Khan (0 in 1) to secure the match for Punjab. Then, in the final over Arshdeep Singh got two wickets of Sandeep Sharma (0 in 2) and Priyam Garg (3 in 5) when SRH needed 14 runs in just 6 balls. However, on the second-last ball, Bishnoi got a brilliant run-out that dismissed Khaleel Ahmed (0 in 2) which ended SRH’s innings at 114-10.

Match 43 – The Man of the Match award goes to Chris Jordan for his brilliant figures of 3/17.#Dream11IPL pic.twitter.com/ABgCMHPB8D

Chris Jordan won the Man of the Match award for his excellent 4-over spell of 3 wickets giving away just 17 runs. The English cricketer along with Arshdeep Singh took 7 wickets and gave away just 15 runs in the final 4 overs. This was the best death-overs bowling from any side till now. The match had another highlight as Suchith, the substitute for Shami took a brilliant catch on the edge of the boundary to dismiss Manish Pandey. With this victory, KXIP have now won 4 games straight. They now have 10 points and are resting at the 5th position in the points table.

Three cheers to #KXIP ft. Jonty, Arshdeep & Jordan@lionsdenkxip trio recap fielding and bowling brilliances that helped their side secure an unbelievable win against SRH in Dubai.

On the other hand, SRH lost another match to just move 1 position down to 6th place. Now, even after winning all their matches, SRH will have only 14 points. So, their chances of qualifying are completely dependent on how the other teams play. They will also have to improve their net run-rate. On the contrary, KXIP looks good and if they manage to win all of their upcoming 3 matches, they will have 16 points and can directly qualify for the playoffs. So, they will be bucking themselves up for their next game against KKR who are just 2 points clear of them whereas SRH will be padding themselves up to go against DC in their next fixture.