Kolkata Knight Riders Seize Another Win Against Rajasthan Royals, But Can They Qualify For The Playoffs? 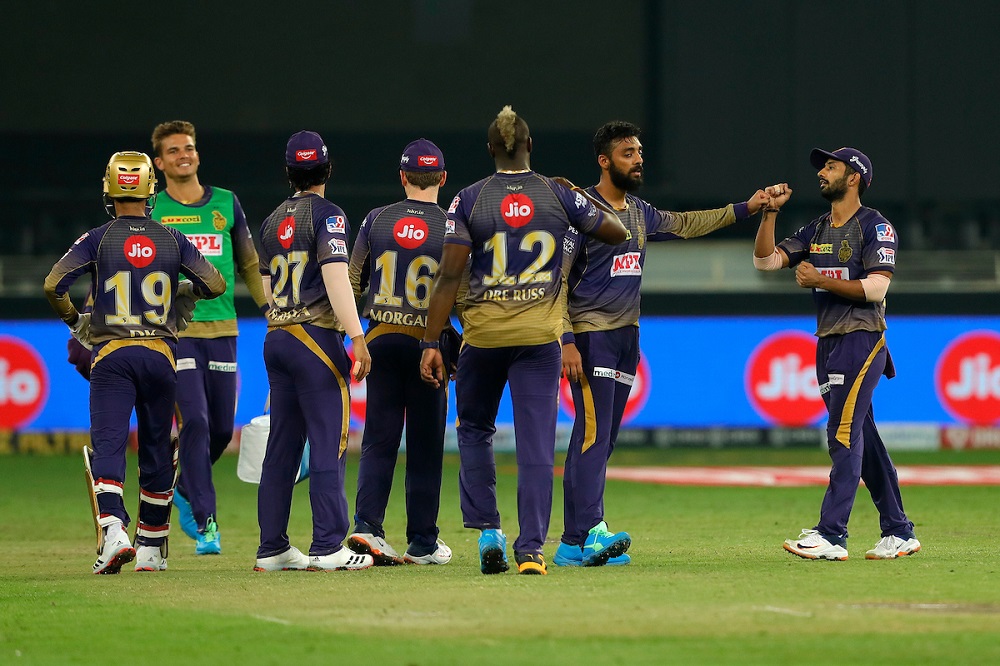 Kolkata Knight Riders defeated Rajasthan Royal to move up on points table but their qualification for playoffs depends on RCB vs DC and MI vs SRH.

IPL 2020 has been nothing short of a thrilling journey so far. Even after reaching match 54, we do not know which team will qualify for the playoffs. The only team that has sealed their spot in the Top 4 is Mumbai Indians. On the other hand, CSK and KXIP are the only teams to be eliminated so far. As a result, it was now time for the clash between Kolkata Knight Riders and Rajasthan Royals to see who could get the better of the other one. The team that would win could increase their chances of qualifying. However, they would need to win a bigger margin to seal their spot for sure. So, let us see what happened as the two locked horns with each other.

The match began as Rajasthan Royals won the toss and opted to bowl first. The decision turned out to be quite good for them as in the first over itself, Jofra Archer dismissed Nitish Rana (0 in 1). As a result, Rahul Tripathi came in at 3 to support Shubman Gill from the other end of the crease. The two played effortlessly as they got 55 runs from the powerplay itself. However, after that in the 9th over, Gill (36 in 24) got out. In the very same over, Rahul Tewatia also dismissed Sunil Narine (0 in 2) to send him back to the pavilion for a duck. Now, Eoin Morgan came to the crease as KKR were 74-3 in 9 overs. They knew they needed a big total to win against a team like RR.

So, the players started going for the big shots but that did not go well as Rahul Tripathi (39 in 34) lost his wicket to Shreyas Gopal, in the 12th over. After him came Dinesh Karthik who got in the 13th over. Now, KKR was 99-5 in 13 overs and pressure was building on them. However, their skipper Morgan took things calmy and smashed the RR bowlers to get some runs on the scoreboard for his team. Andre Russel, who had come to support him was also hammering the bowlers as he scored 25 in just 11 balls before getting out in the 16th over. The came Pat Cummins who chipped in 15 runs from 11 balls before Kartik Tyagi dismissed him in the 20th over. However, Eoin Morgan (68* in 35) and Kamlesh Nagarkoti (1* in 1) had managed to get 191 runs on the scoreboard for KKR in their 20-over innings.

192 was surely a huge target but not for a team like RR. In their previous match itself, RR had chased a target of 196 with 8 wickets in hand and 10 balls to spare. So, they were hoping this wouldn’t be an issue for them. As a result, their standard opening duo Ben Stokes and Robin Uthappa came to the crease. However, things did not quite go their way as in the first over itself, Uthappa (6 in 2) got out. So, Steven Smith came in at 3. After that, in the 3rd over, Stokes (18 in 11) and Smith (4 in 4) also got out. As a result, Sanju Samson and Jos Buttler came to fight for the RR fans’ hopes. However, that did not go quite well as Samson (1 in 4) also got dismissed in the 4th over. In the very next over, Riyan Parag (0 in 7) also got out.

Now, Buttler and Rahul Tewatia were carrying the hopes of all the RR fans. Their team had managed to score only 41 runs in the powerplay but had lost 5 wickets. Buttler ignited fire for them as he started smashing the KKR bowlers. However, soon in the 11th over, he (Buttler- 35 in 22) also got out. Then came Shreyas Gopal who tried to build a partnership with Tewatia (31 in 27) before the latter lost his wicket to Chakravarthy in the 15th over. Then RR just collapsed as in the 18th and 19th over, Archer (6 in 9) and Tyagi (2 in 3) also got out. Gopal (23 in 23) and Aaron (0 in 8) managed to get RR to a total of 131-9 resulting in a 60 runs victory.

One demolished the RR bowling line-up while the other ran through the RR batting line-up. KKR duo recap their side's magnificent win in Dubai and speak about THAT 'Unbelievable' DK catch.

Can KKR still qualify for the playoffs?

Kolkata Knight Riders won the match but have still not qualified for the playoffs. Their qualification still depends on the match the next day between RCB and DC. If either of the teams lose by a big margin, then KKR have a chance of qualifying. Anyhow, Pat Cummins became the Man of the Match for his excellent 4-over spell. He took 4 wickets after giving away 34 runs. Now, KKR will surely be waiting for the result between RCB and DC. If that doesn’t go well, they will be looking forward to SRH facing MI as KKR can still qualify if MI defeat SRH. So, let us see which of the team will make it to the Top 4 of the points table to qualify for the playoffs.