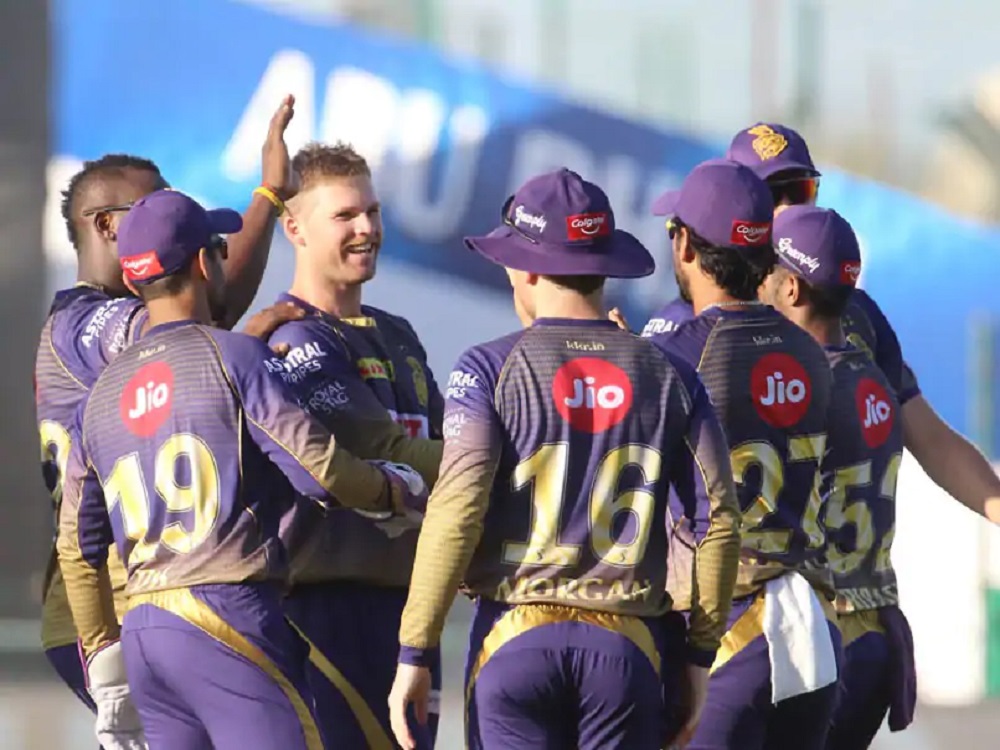 Kolkata Knight Riders did not really have a great start to their season of IPL 2020. However, they have maintained their 4th position in the points table. They have won only 4 matches out of 9 but the other teams have also not been really good to remove KKR from their position. Now, Kolkata Knight Riders had a chance to grab 2 more points as they were going up against Sunrisers Hyderabad. It was matchday 35 of the tournament and was being held at Sheikh Zayed Stadium in Abu Dhabi. KKR had made 1 chance as they brought Lockie Ferguson in their playing 11 instead of Chris Green. On the other hand, SRH had replaced Khaleel Ahmed with Basil Thampi and Shahbaz Nadeem with Abdul Samad.

The match began as SRH won the toss and chose to bowl first. However, this decision did not work quite well in their favor as KKR got a brilliant start in the powerplay. Shubman Gill and Rahul Tripathi managed to get 48 runs in the powerplay at the loss of 1 wicket i.e. of Rahul Tripathi (23 in 16) on the last ball of the 6th over. Then came Nitish Rana to support Gill from the other end. They had a good partnership until the 12th over when Rashid dismissed Gill (36 in 37). In the very next over, Rana (29 in 20) also got out at a score of 88-3.

Now, Andre Russell and Eoin Morgan were on the crease. They were playing a bit defensively as they did not want to lose any more wickets. However, in the 15th over Russell got dismissed as he went to hit a big shot but ended up giving Vijay Shankar a simple catch. Then came the former captain Dinesh Karthik to the crease. Karthik knew that his team needed to get some runs on the board if they want to win this game against SRH. So, he smashed boundaries from the start of his innings. In the final overs, Morgan also played a few good strokes. Both, Karthik (29* in 14) and Morgan (34 in 23) were able to get KKR’s total to 163-5 in their 20-over innings. 164 was not a huge target but it was something that KKR could defend with their bowling lineup.

The second innings began as Kane Williamson and Jonny Bairstow came to the crease. Warner had not opened himself as he wanted to give Williamson a chance to bat in the upper order. This decision worked out quite well for Warner as Williamson smashed 29 in 19 before getting out in the 7th over. Bairstow and Williamson managed to get 58 runs in the powerplay. This had lessened the pressure on them as now they needed only 106 in 98 balls. However, Priyam Garg came in to bat at 3 which surprised everyone as to when Warner will be coming to the crease. Garg (4 in 7) did not last much as he soon got out in the 9th over. After that, finally, Warner came to the crease. Warner started off slow as he did not want to lose any more wickets.

Lock(ie) & loaded with Ferguson and Gill.

A spectacular relay catch together and a fiery spell of fast bowling – #KKR duo relive it all post their thrilling Super Over win in Abu Dhabi.

However, just after Garg, Bairstow (36 in 28) got out in the 10th over. After that, all hopes were on Manish Pandey and David Warner. But, Pandey (6 in 7) also got dismissed in the 12th over. After that, Vijay Shankar (7 in 10) came but Pat Cummins soon dismissed him in the 16th over. Then Abdul Samad came as a ray of hope as he smashed 23 in 15 to support Warner from the other end of the crease. However, Samad got out in the 19th over. Now, all hopes were on Warner as SRH needed 18 in 6 balls. Warner fired boundaries but only managed to get 17 runs from the over which took the match to super over. The super over was quite easy for KKR as SRH only scored 2 runs, thanks to Lockie Ferguson. Karthik and Morgan scored those to seal victory.

Match 35 – Lockie Ferguson is rewarded with the Man of the Match award for his brilliant figures of 3/15.#Dream11IPL pic.twitter.com/OzuOpgntSB

Lockie Ferguson won the Man of the Match award for his excellent bowling figures as he gave away only 15 runs and took 3 crucial wickets in 4 overs. He also bowled amazing on the super over to help Kolkata Knight Riders grab the 2 points from the match. With this victory, there was not any change in the points table but KKR definitely increased their lead in points over the bottom 4. They will definitely be happy as their former skipper Karthik has also found his form now and they can power their way through to the playoffs. As a result, now they will be looking further to extend their lead as they play RCB in their next fixture. On the other hand, SRH will be going up against RR.