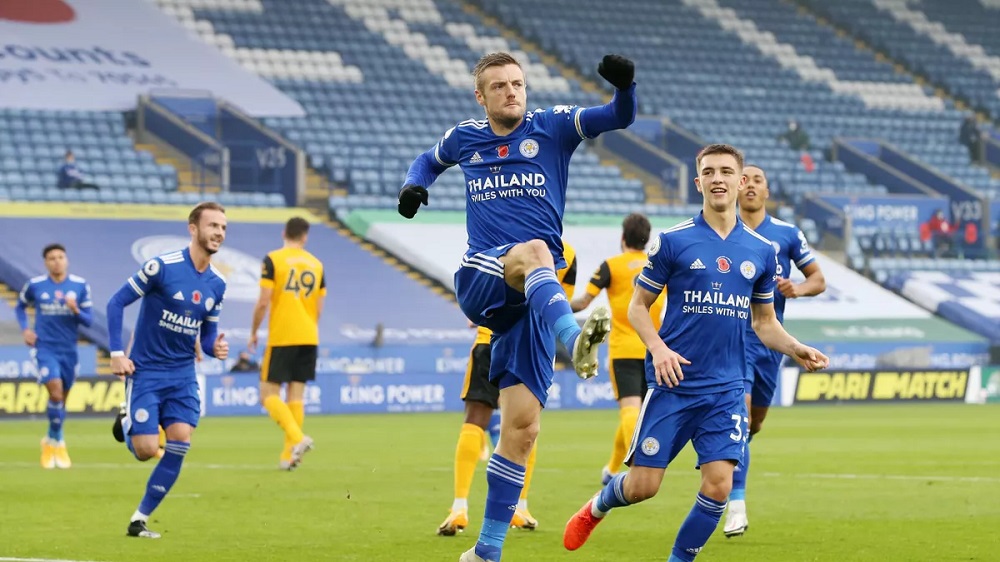 A still of Jamie Vardy celebrating after scoring the penalty to give his team a 1-goal lead.

The international break has come and that means we are going to have to wait around 2 weeks for our favorite football leagues to return. One of those leagues is the English Premier League. Premier League 2020/21 has been nothing short of a rollercoaster ride until now. We got to see some really thrilling and nerve-wracking fixtures. The teams that used to dominate the entire league are struggling whereas the teams that barely made it to the Top 4 are ruling. Now, it was time for another interesting match as Leicester City was set to face Wolverhampton Wanderers FC in their matchday 8. Both the teams had brilliant players and had an equal opportunity of winning the 3 points from this match.

Both the teams wanted a win and hence, their managers put their best players in the starting 11. The match began as Leicester City kicked off. They started off playing possession game but were also creating a good attack. As a result, in the 13th minute, the Foxes won a penalty after Praet tried to cross the ball into the box. However, it hit Kilman’s hand inside the box after which the Leicester City players appealed towards the referee for a penalty. After confirming with the VAR, the referee awarded them a penalty. Vardy took the spot-kick and made no mistake in converting it as he smashed the ball into the right corner of the net after sending the Wolves keeper the wrong way. It had only been 15 minutes and Leicester City was already 1 goal up.

However, they did not sit back and continued to pressure their opponents as they were looking for another goal. After some time, in the 38th minute, the Foxes won themselves another penalty as Ait-Nouri fouled Justin inside the box. However, Vardy failed to convert this one as Rui Patricio made an excellent save to deny the Leicester City striker. That was the last attempt from the first half as the score at halftime was 1-0. Leicester City had completely dominated Wolves and was looking forward to getting the 3 points from this match. Wolves needed to improve their game, otherwise, this was going to be a totally one-sided game.

The second half began and Wolves had done their homework. They burst into the second half as they were putting pressure on the Foxes and also kept good possession of the ball. As a result, in the 56th minute, Podence dashed past the Leicester City defense and passed the ball to Neto. The latter took a powerful shot on the target but was denied by K. Schmeichel. Once again in the 77th minute, the Wolves had a great attempt on target that came from a powerful strike from Neves. However, the Leicester City goalkeeper denied them once again to maintain his clean sheet. As a result, the match ended with a score of 1-0 in the Foxes’ favor.

Leicester City had won their 6th match out of their 8 matches to climb up to the top of the points table. They are the Premier League table-toppers now with 18 points as they had lost two matches and won the rest. Wolves, on the other hand, got pushed down to the 9th position as they had now lost their third match. They had won 4 and drawn one. Now, with full-time the league headed into the international break. It will be returning in two weeks as Wolves will be facing Southampton whereas Leicester City will be up against Liverpool in their next fixture.