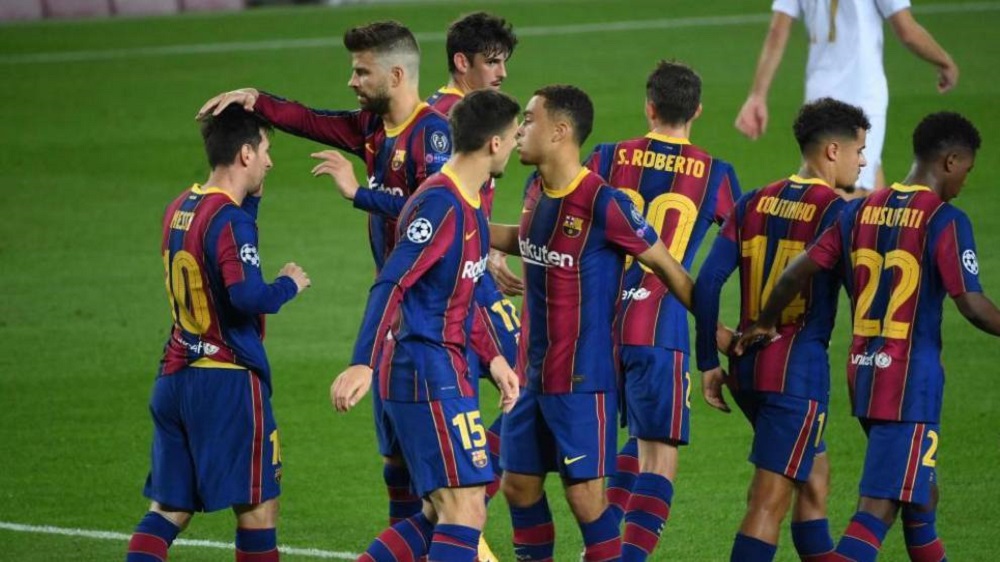 Barcelona were set to begin their UEFA Champions League campaign on 20th October, 2020. On 1st October, the draws were carried out and Barcelona was drawn with Juventus, Dynamo Kyiv, and Ferencvaros. This meant that Lionel Messi’s Barcelona will be locking horns with Cristiano Ronaldo’s Juventus two times. This might be the last chance for us to see the two of the best players go up against each other. However, Barcelona will be playing Juventus on 28th October. For now, they were set to begin their UCL campaign against Ferencvaros on 20th October. The Blaugranas were all set to start their new season under their new boss Ronald Koeman. The former Everton coach has been nothing short of impressive as Barcelona began their La Liga season with 2 consecutive wins and a draw, and a loss this season.

Even though they lost the match prior to their 1st matchday of UCL, they seemed to be fully focused on the current fixture. Besides them, Juventus were also beginning their UCL campaign on the same day. However, their Portuguese star Cristiano Ronaldo was not a part of the squad, He had been ruled out after catching COVID-19 during the international break. Anyhow, Messi and his Co. came out on the pitch to start a new chapter in their 2020/21 season. So, let us see the line-ups for both the teams:

Their manager Ronald Koeman went with his standard formation of 4-2-3-1 with Messi as the sole striker.

Their coach Serhiy Rebrov also went with the formation of 4-2-3-1 with Nguen as the only striker.

The first half began as Ferancvaros kicked off on the referee’s whistle. Barcelona started playing aggressively from the start as they wanted to get some early goals. However, it seemed like Ferancvaros got the first goal as Nguen rushed past the Barcelona defenders and fired the ball into the back of the net in the 10th minute. But, soon the linesman raised the flag to indicate that Nguen had been offside the entire team. So, the goal was disallowed. Even after that Ferancvaros did not give up and kept pressurizing the Catalans to create attacks. However, they were not able to convert any of them.

Soon, Messi won a penalty for the Catalans. He was dribbling inside the box when Kovacevic stuck a leg out to bring down the Barcelona captain. The 33-year old took the penalty himself and converted it immediately to score the first goal of the game in the 27th minute. After that, it seemed like Ferancvaros had lost all their confidence. In the 42nd minute, Barcelona got their second goal of the match. De Jong kept a brilliant through ball to Ansu Fati who struck a volley shot to just place it in the back of the net past Dibusz. With that, the score at the end of half-time was 2-0 in Barcelona’s favor.

The second half began and Barcelona was in no mood to settle back and defend the 2-goal lead. They were attacking completely trying to create pressure on Ferancvaros. Soon enough, within 7 minutes into the second half, they got their 3rd goal of the game. It was a brilliant play between Messi, Fati, and Coutinho. Coutinho shot the ball past Dibusz into the back of the net to his near post. After that, Gerard Pique got a red card in the 68th minute for pulling Nguen’s shirt inside the box. As a result, Ferancvaros got a penalty. Kharatin converted the spot-kick immediately to make the score 3-1 for his side. He sent Neto the wrong way and smashed the ball into the right corner. Now, Barcelona was in danger as the Ferancvaros only needed 2 goals to draw and the Catalans were down to only 10 men.

However, being reduced to 10 men did not affect the Blaugranas. They continued attacking and scored another goal in the 82nd minute. It was a brilliant goal as Dembele rushed past the Ferancvaros defenders with amazing control on the ball. Then, he kept a beautiful assist to Pedri who shot the ball into the left corner as the ball touched Dibusz’s hands only to end up in the back of the net. Just 7 minutes later, Dembele also scored his first goal of the season after a great assist from Messi. The score at full-time was 5-1. Even though Ferancvaros were not that a great team, Barcelona definitely got a boost after this win. They have started their UCL campaign on a positive note and will be looking forward to win matches just like this.

What record did Lionel Messi create?

Lionel Messi set yet another record in Barcelona’s first fixture of the UCL campaign as he became the first player ever to score in 16 consecutive seasons in the history of Champions League. This was definitely a great win for the Catalans. However, now they will be facing Juventus in their next game. It’s not confirmed yet whether Ronaldo will be playing or not. But, everyone is surely hoping that he plays so that every football fan can get to see Ronaldo and Messi share the pitch together once again after so long. If Ronaldo plays, it will definitely be trouble for Barcelona as Pique is out for the game against Juventus.

On the other hand, before playing Juventus, the Catalans will be playing El Clasico against Real Madrid on 24th October. Another thing that Koeman needs to worry about is Griezmann. The Frenchman has not really been in great form this season. He has been excellent for France but has not found the back of the net yet for Barcelona. So, we will have to see what the Dutch manager decides for the team. Anyhow, this is definitely going to be an exciting week for Barcelona fans. Two exciting fixtures back to back as Lionel Messi and Co. will be trying to move up on the points table in La Liga and then get their second UCL win against Juventus.