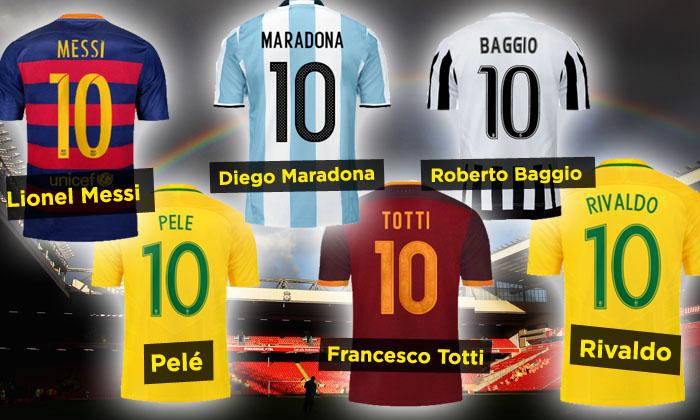 Football is one of the most-watched sports on the planet. Whenever we get a chance, we watch football to pass the time. With just a few hours left for matchday 6 of the UEFA Champions League, we came up with an exclusive new topic. When it comes to football, the two names that always come up are Pele and Maradona. Do you all know what the common thing between these two legends is? It is their jersey number. The no. 10 jersey is one of the most celebrated jersey numbers of all time. Most of the famous players in all of football history used to wear this particular jersey and flourished under that number. We will talk about the List of Top Footballers Who Wore Number 10.

Apart from that, there have been many incidents where players were forcefully given that jersey and failed to live up to its expectations. But there have been more cases of success than failures. Not only Pele and Maradona but there also have other players who wore that jersey and wrote their names in gold in the history of football. The most recent player to do so is Lionel Messi. The former Barcelona man took the no. 10 jersey to a new height that other players can only imagine. Just like him, there are others too who flourished wearing that jersey. In this article, we will talk about those individuals. The list of footballers who wore the number 10 jersey is as follows.

Edson Arantes do Nascimento, who is popularly known as Pele, is a Brazilian football legend who won the World Cup thrice (1958, 1962, and 1970). Born on 23rd October 1940, Pele wore the legendary no. 10 jersey and created records that would go on to live in football history forever. Pele started his career in 1956 and retired in 1977. He scored more than 750 goals in his career. For most of his life, he played for Santos, and in the latter half of his career; he played for New York Cosmos. For many, he is the greatest football player of all time.

Diego Armando Maradona was born on 30th October 1960. He was the captain of the Argentine side who won the World Cup in 1986. He wore the legendary no. 10 jersey. Diego scored the most infamous goal and the most celebrated goal in the same match against England in 1986. The infamous goal was scored by hand and was named ‘Hand of God’, while the other one was awarded the goal of the century award. Maradona received the ball at the center line and from there dribbled past all the defenders, including the goalkeeper, to score the goal. Maradona helped Napoli win their first-ever Scudetto. He won another won with them, and to date, those two are the only Scudettos won by Napoli. Sadly, we lost the legend last year on 25th November 2020.

Ronaldo de Assis Moreira was born on 21st March 1980. He won the World Cup with Brazil in 2002. He was an integral part of the Brazil team. Ronaldinho helped Barcelona get back on its feet, and in 2006 he won the UEFA Champions League with them. The level of skill that Ronaldinho used to possess was unmatched. He won the Ballon D’or in 2006. He is the only Barcelona player to get a standing ovation for his performance against Real Madrid in Santiago Bernabeu. Ronaldinho also played for AC Milan and is the only player to win every trophy. His dancing steps are as famous as his movements on the ground.

Lionel Andres Messi recently won his 7th Ballon D’or. Messi signed for Barcelona at a tender age, and since then he progressed at an unimaginable rate. He won everything with Barcelona. For most of his career, he wore the no. 10 jersey. At the start of this season, he went to Paris Saint Germain and took up no. 30. In 2012, he scored Gerd Muller’s record of scoring 91 goals in a calendar year. In 2021, Lionel Messi won Copa America with Argentina. He has 756 career goals, and it is still counting.

Michel Platini is one of the best players to ever grace the football field. Under his captaincy, the French national team flourished. He made a pact with the no.10 jersey at both club and national level. He won the Ballon D’or on three different occasions (1983, 1984, and 1985). Platini was the highest scorer of Serie A in three different seasons. He also won the European Championship with France in 1984. He used to play for Juventus. Michel Platini was one of the 6th presidents of UEFA. His reign was from 2007 to 2015.

The Italian international missed his penalty in the 1994 World Cup Final against Brazil and paid the heavy price. It is the only dark mark in his career. Roberto Baggio Cavaliere was born on 18th February 1967. He was nicknamed ‘The Divine Ponytail’ due to his hairstyle. He was a prolific striker as well as a playmaker. It is not every day that we experience a player of such quality. He scored 490 goals in his football career.

Zinedine Yazid Zidane was bron on 23rd June 1972. He was the former captain of the French national team. He helped the France team win their first-ever World Cup in 1998. A couple of years later, they would go on to win the European Cup. He is famous both as a player and as a coach. He scored two goals in the 1998 World Cup final and scored the only goal in the 2002 Champions League final for Real Madrid. To this day, it remains one of the greatest goals ever scored. In the 2006 World Cup final, he head-butted Marco Materazzi and was shown a straight red, thus ending his glorious career. Under his coaching, Real Madrid won three consecutive UEFA Champions Leagues (2016, 2017, and 2018). Currently, he is unemployed and enjoying his free time.

Lothar Herbert Matthaus was born on 21st March 1961. Under his captaincy, West Germany won their third World Cup in 1990. His work rate was unimaginable as if he had one extra pair of lungs. From the very first minute till the last minute, he could cover the whole ground without breaking a sweat. There was not much beauty to his game, but his game played a crucial role for the team to perform well. He was nicknamed ‘Der Panzer’. ‘Der Panzer’ was Germany’s best no. 10. To date, he remains the only player to play in five separate World Cup tournaments. Lothar Matthaus is also a club legend for Bayern Munich. Currently, he is one of the football pundits in Germany.

Arthur Antunes Coimbra, also popularly known as Zico, was born on 3rd March 1953. He was one of the main players in the Brazil squad in the 70s and 80s. Zico was nicknamed as ‘White Pele’, due to having a similar playing style to Pele. He is one of the greatest players ever to wear the no. 10 jersey. He mainly used to play as an attacking midfielder. After retirement, he took up coaching. From 2014 to 2017, he was the coach of the Indian team FC Goa. Zico was a beautiful player of the beautiful game.

Francesco Totti was born on 27th September 1976. If Totti can be described in one word, then it is ‘Loyalty’. His loyalty towards his club AS Roma is never-ending. Throughout his career, he only played for AS Roma. He had several offers from other big clubs in Europe, but he never left the club. His career spans from 1992 to 2017. He scored 250 goals for AS Roma in 619 appearances. In 2006, he won the World Cup with Italy and proved to be a valuable asset for them. Totti has given us several memorable moments, and his feet used to do all the talking. Francesco Totti remains one of the most lovable players of all time to wear the no.10 jersey.

Ricardo Izecson dos Santos Leite, also known as Kaka, was born on 22nd April 1982. He was there in Brazil’s 2002 World Cup-winning squad but did not play any match. He will be remembered for his tenure with AC Milan. At that time, Kaka’s presence was enough for his opponents to lose all hope. He used to run like a deer, dribbling past all the players on the pitch. He won the Ballon D’or in 2007. Kaka also played for Real Madrid. He won the Champions League in 2007. If injuries did not exist, then this no. 10 would have gotten a much higher position on this list.

From the triumph of 2007 to our return to the most prestigious European stage: looking back with @KAKA 🗣️🔝