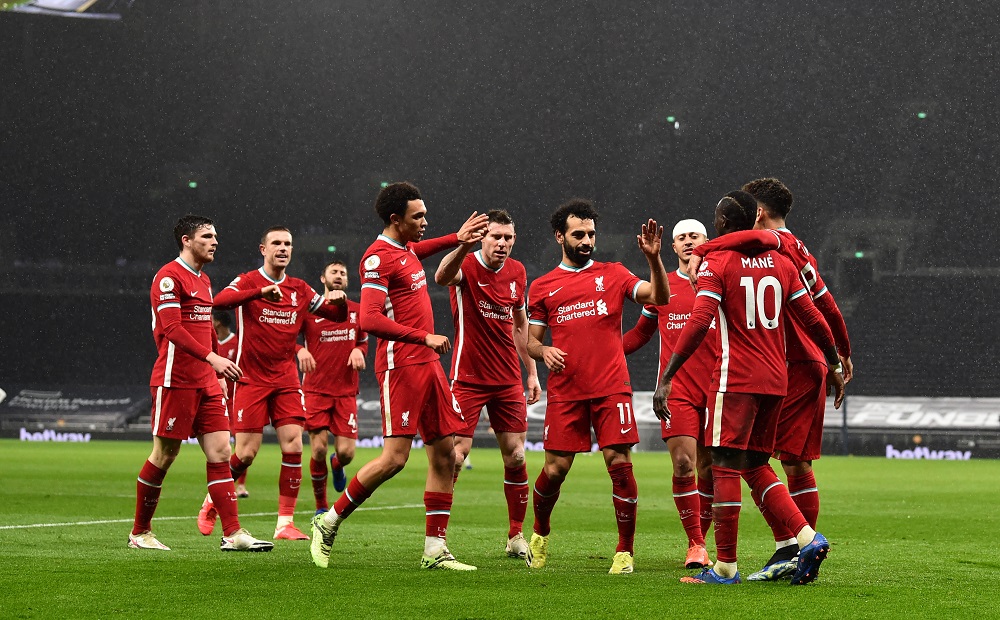 Liverpool thrashed Tottenham to climb back to the Top 4 on the Premier League points table.

Yesterday night, Tottenham hosted Liverpool at the Tottenham Hotspur Stadium for their 19th fixture of the Premier League. However, for the visitors, it was their 20th game of the season. Anyhow, it was going to be really interesting as both the teams were looking forward to climb up the points table with a victory in this match. Liverpool was in the 5th position and move up to the 4th spot replacing West Ham. On the other hand, Tottenham was in the 6 place and could also go to the 4th spot directly if they won the 3 points from this game. As a result, both the teams were really excited and it was going to be a thrilling game.

The match began as Liverpool kicked off and they were maintaining possession of the ball from the start. They were looking forward to create chances but it was Tottenham who got the first goal of the game. Kane set up Son after a great pass and the Korean forward went dashing towards the Liverpool goal. He stayed calm under the pressure and beat Allison Becker to smash the ball into the left corner of the goal. Consequently, in the 4th minute itself, Son helped the hosts get an early lead. However, VAR interrupted as it found Son offside while Kane was passing the ball. As a result, the goal was denied and the score was once again 0-0.

The match continued and now both the teams were pressing highly and trying to create chances. However, neither of them was able to convert those chances and find the back of the net. Finally, in the injury time of the first half i.e. the 49th minute (45+4′), Firmino scored the opening goal of the game. Mane set up the Reds striker with a low cross inside the 6-yard box. Firmino then scored an easy tap-in goal to put the visitors in lead. As a result, at the end of the first half, Liverpool managed to get a 1-goal lead.

The second half began and now Tottenham was desperately looking for an equalizer. However, it was the Reds who got a goal just 2 minutes into the second half itself. Mane attempted a low shot from the edge of the box which Lloris saved easily. But, the ball went straight to Trent Alexander-Arnold after a save from Lloris. The Liverpool right-back then took a low-volley to smash the ball into the back of the net which Lloris was unable to save. Consequently, Liverpool was now in a comfortable 2-goal lead.

However, Tottenham didn’t give up and continued pressing and looking for a goal. Consequently, just 2 minutes later, the hosts scored a goal to keep the spirit of the game alive. Bergwijn set up Hojbjerg outside the box after running towards the edge of the box. The Danish midfielder took a first-time shot and scored a banger as the ball went into the right corner of the goal beating Allison Becker. As a result, now the score was 2-1. However, the hosts still needed a goal to level the game.

So, the match continued and both the teams were still creating chances looking for a goal. In the 59th minute, Salah smashed the ball past Hugo Lloris to double the lead for the hosts once again. However, VAR disallowed that goal as the ball had hit Firmino’s hands during the buildup of the goal. But, it didn’t take the visitors much time to double their lead yet again. In the 65th minute, Sadio Mane scored the third goal for Liverpool as the Reds made their dominance clear to the hosts. Alexander-Arnold delivered a beautiful cross inside the box. Mane did the rest as he sent the ball past Lloris after Rodon wasn’t able to clear the ball from the Reds right-back.

That was the last goal of the game as Liverpool managed to play safely after that. They didn’t gave Tottenham a single chance to score another goal. The match ended as the visitors emerged victorious in an amazing fixture at the Tottenham Hotspur Stadium. With this victory, Liverpool managed to climb back to the 4th place in the points table pushing West Ham down to the 5th whereas Tottenham maintained their position in the 6th position. Anyhow, both the teams will now be preparing for their upcoming matches. Liverpool will be going up against West Ham whereas Tottenham will be locking heads with Brighton.

A goal, an assist and a BRILLIANT all-round performance 👏@TrentAA is your @carlsberg Man of the Match for #TOTLIV 🤩 pic.twitter.com/A2VFhWIxVn