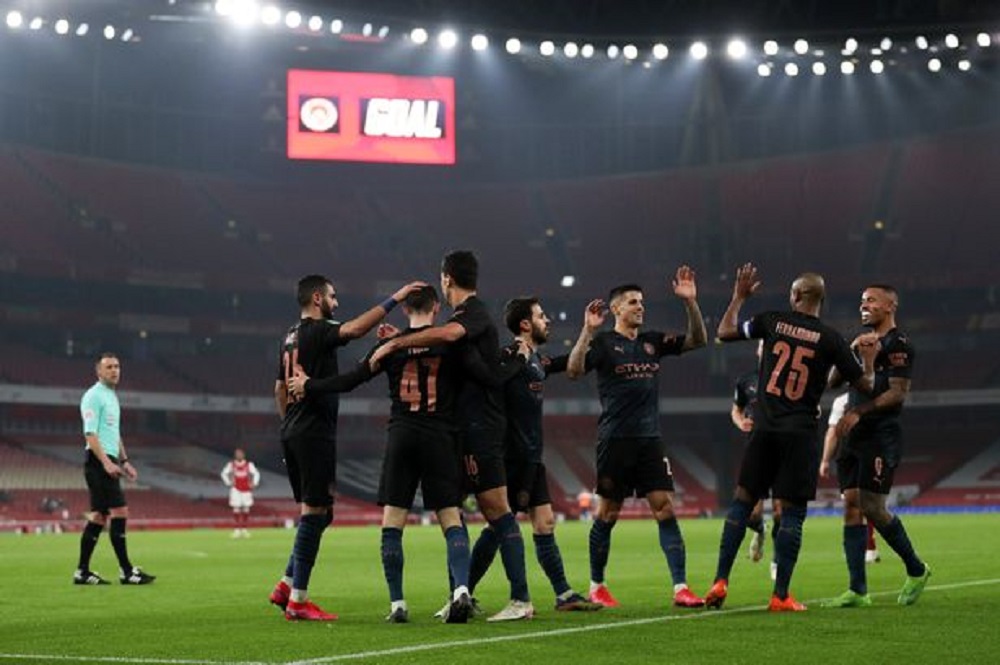 Manchester City crushed Arsenal in the EFL Cup quarter-final with a 4-1 victory.

Manchester City faced Arsenal yesterday in the EFL Cup quarter-final. The men in Blue haven’t been in their best form this season. They are currently in the 8th position in the Premier League as they’ve won 6 out of their 13 matches. Apart from that, they’ve drawn 5 and lost 2 matches. On the other hand, Arsenal have been struggling this season as they’ve only managed to gather 14 points from their 14 games. They’ve won 4 games, drawn 2, and lost 8 till now. Consequently, it was going to be a really thrilling game. It was also going to be interesting as the Arsenal manager Arteta would be going up against Pep Guardiola, his former head coach at Manchester City. The last time the two teams met, Manchester City emerged victorious in a 1-0 win with an early goal from Raheem Sterling.

The match began as Manchester City kicked off and they were looking forward to maintain possession. They were not only maintaining possession but were also looking to create chances from the beginning itself. As a result, in the 3rd minute, Jesus scored the first goal for Manchester City. However, Arsenal didn’t get disheartened by this. Instead, they were now putting pressure on Manchester City looking for an equalizer. Finally, in the 31st minute, Arteta’s men got an equalizer as Lacazette scored for the Gunners. He took a brilliant header to make the scores level for his team. With that, the first half concluded as the score was tied at 1-1.

The second half began and now both teams were desperately looking for goals. However, just 9 minutes into the second half, Manchester City got their second goal of the match after a brilliant freekick from Riyad Mahrez. The Arsenal goalkeeper made an error as he failed to catch the ball and as a result, City managed to get the lead once again. However, that was not it as 5 minutes later, Foden scored the third goal for Manchester City. Now, the gunners had lost all hope as they were 2 goals down. As a result, they conceded another goal in the 79th minute that came from Aymeric Laporte. The French center-back took a great header to seal the win for his team.

That was the last goal of the match as Manchester City had crushed Arsenal in the EFL CUP quarter-final. They had won the game with a score of 4-1 at the Emirates Stadium i.e. Arsenal’s home ground. Pep Guardiola had once again defeated Mikel Arteta with his tactics. As a result, now Manchester City have confirmed their spot in the semi-final of the EFL Cup. Arsenal will surely be demoralized after this defeat whereas Pep Guardiola’s men must have got a boost with this win. Anyhow, they both will now be preparing for their next fixture as Manchester City will be facing Newcastle United and Arsenal will be up against Chelsea in the Premier League.