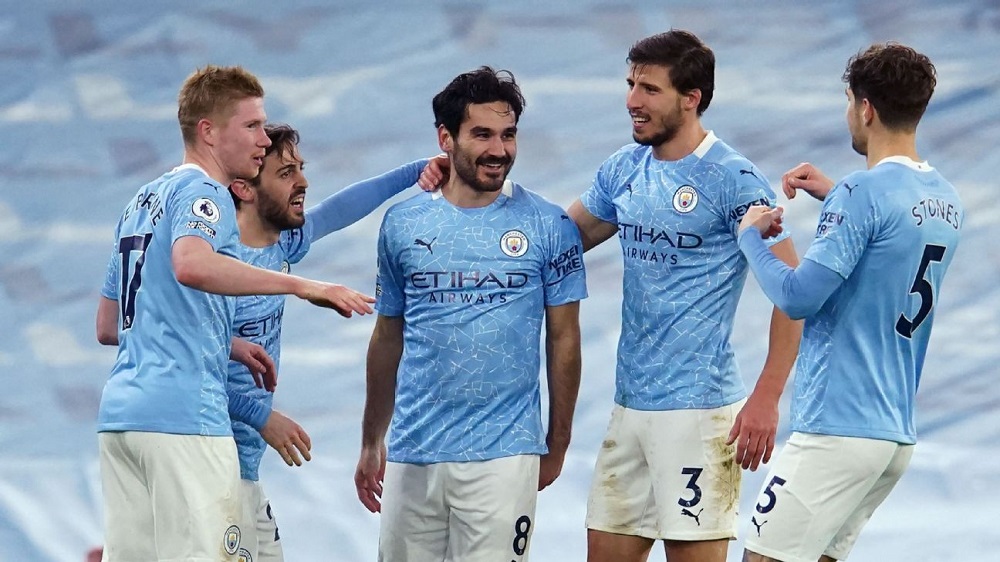 Manchester City crushed Crystal Palace to climb up to the 2nd position on the Premier League points table.

The match began as Manchester City kicked off and the Cityzens were playing their standard possession game. They were creating chances right from the beginning and consequently, they got their first goal in the 23rd min. Stones headed his side in front, but the attention went to DeBruyne. Sterling started the move with a crossfield pass to DeBruyne. The Belgian then had to pick his pass and with the outside of his right boot, he curled the ball towards Stones who headed it past Guaita.

Manchester City maintained the domination of possession throughout the half and with continuous attacks, they even kept the Crystal Palace defenders busy. In the 38th minute, Manchester City were close to doubling their lead but Jesus failed to generate any power on his diving header. He raced onto Gundogan’s flick-on but Guaita had no trouble saving his effort from close range. As a result, the score at the end of the first half was 1-0 in Manchester City’s favor.

The second half began and Manchester City continued dominating possession and consequently, they got their second goal in the 56th minute of the game. There was a moment of brilliance from Gundogan, that put Manchester City further in front. After conceding a corner, Crystal Palace thought they had cleared the danger through Townsend. However, he had his pocket picked by Gundogan on the edge of the box. Consequently, before the Crystal Palace’s defense could react, the German midfielder curled the ball into the top corner past Guaita. Then came the first change for that night as Foden replaced Silva in the midfield.

In the 68th min, Manchester City made the game more comfortable for them as they scored their 3rd goal of the match. Stones grabbed a brace after a powerful left-footed drive from inside the box. The center-back partnered with Dias who saw his header saved by Guaita. However, the rebound fell perfectly to Stones and he did not waste the opportunity. The Cityzens continued their domination over the game till the end. Crystal Palace only had two shots on target when the game was about to end. However, then Raheem Sterling made it four with a stunning free-kick which Guaita had no chance of stopping his effort. After Torres was fouled on the edge of the box, Sterling was determined to have a go.

With that, the game ended and Manchester City moved up to the 2nd position in the Premier League points table. They are now within two points of arch-rivals Manchester United after outclassing Crystal Palace. Manchester City was the first team to record five consecutive victories in the Premier League 2020-21 season. They are now unbeaten in nine games in the league this season. Anyhow, both the teams will be getting ready for their next games now. Manchester City will be going up against Aston Villa next on 20/01 i.e. on Tuesday whereas Crystal Palace will lock heads with West Ham on 26/01 i.e. Tuesday.