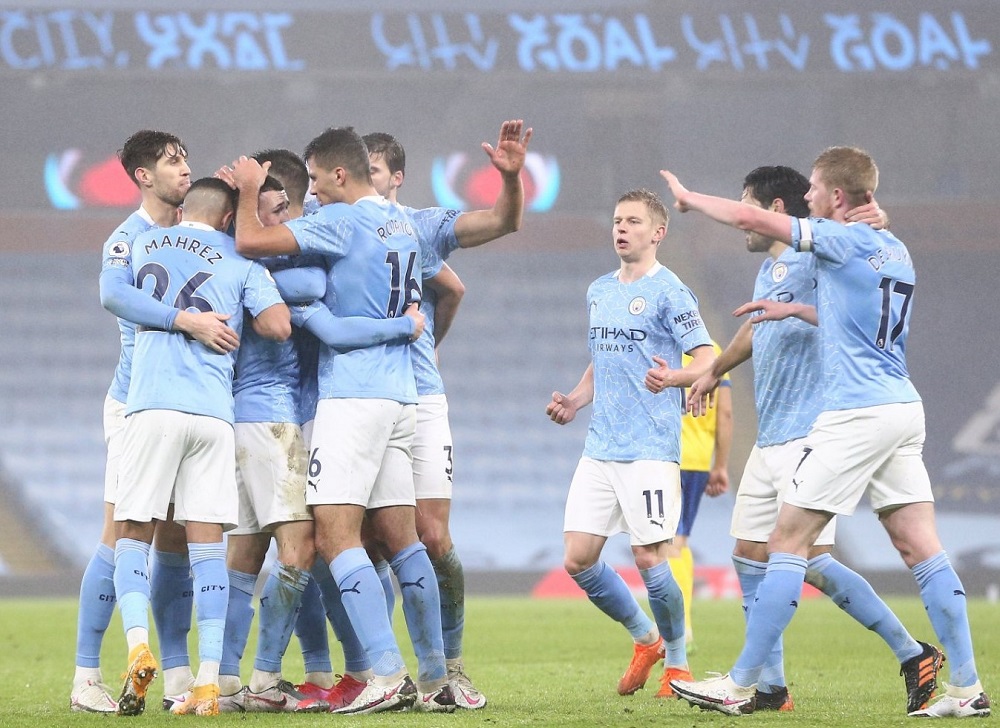 Manchester City defeated Brighton to climb up to the Top 3 on the Premier League points table.

Manchester City hosted Brighton at the Etihad Stadium a.k.a the City of Manchester Stadium as they played their 18th fixture of the Premier League. This was going to be a really exciting match as Manchester City had won 8, lost 2, and drawn 5 out of their 15 games. On the contrary, Brighton had managed to only win 2, lose 7, and draw 8 out of their 17 matches. According to the stats, out of the last 5 matches, Manchester City had won 4 and drawn 1 game whereas Brighton had won neither. In fact, they had lost 2 and drawn 3  games. A victory for City would end up with them going to the Top 4, four points behind the leaders i.e. Manchester United with a game in hand. As a result, the match was surely going to be interesting.

The match began as Brighton kicked off and they kept up with their compact formation which frustrated Manchester City in the early minutes. In the 14th minute, Gundogan played a short pass to Kevin DeBruyne who tried to fire the ball into the back of the net. However, Brighton’s keeper stood firm and blocked the shot to keep the scores leveled at 0-0. The lowly visitors were also keeping the Manchester City’s defense and keeper busy with creating a chance or two from the counter-attacks. But, they were unable to convert it for good.

Riyad Mahrez was looking in a majestic form on the right flank as his passes and skills were quite a sight to watch. Also, with Manchester City dominating the possession along with the inducements of Kevin DeBryune, Gundogan, Bernardo, and Foden, it felt like the Brighton will give their resistance sooner or later. Consequently, a minute before the half time whistle, Pep Guardiola’s men took the lead. It was a piece of brilliance for Foden to finally break down the deadlock. Kevin DeBryune played a pass to the youngster as he cut past the left side of the defense before placing a low shot into the bottom left corner of the goal. As a result, Manchester City had got themselves a goal and were now leading 1-0 at the end of the first half.

At the beginning of the second half, the hosts were dominating the game with perfect passes and chances to take a double lead. However, the Seagulls were strong enough to defend their attacks. Just before the 1-hour mark, Bernardo came agonizingly to double the lead as he collected a loose ball in the box nutmegged a defender, and shuddered the ball with a powerful drive. However, the Seagulls keeper stood strong again. Then, Mahrez was put clear but the Algerian’s low angle shot went a little off the post.

The chances missed by the blues helped the Seagulls build confidence and they looked more threatening than before. They were now looking eager for an equalizer. In fact, Neal Maupay wasted a good chance for an equalizer when he burst between two City players and Ederson was off his line. However, hesitancy from the French striker allowed Stones to foil him. Manchester City had started to lose possession now by giving away passes in the midfield. They seemed pretty much tired at the end of the half which invited pressure from Brighton who were dominating suddenly.

A moment of magic! 🤩

However, in the added time DeBruyne latched on to a poor throw-in and Sanchez pulled the Belgian down. Immediately, the referee pointed towards the spot for a penalty. Sterling stepped up and burst the ball over the bar as the scores remained the same. Consequently, the second half ended with a score of 1-0 in the hosts’ favor. Manchester City had achieved their goal and climbed up to the Top 3 on the points table. However, Brighton failed to get a breakthrough and hence fell down to the 17th position. Moreover, with the only goal of the game that Foden scored, the English midfielder became the top scorer of Manchester City with 8 goals.