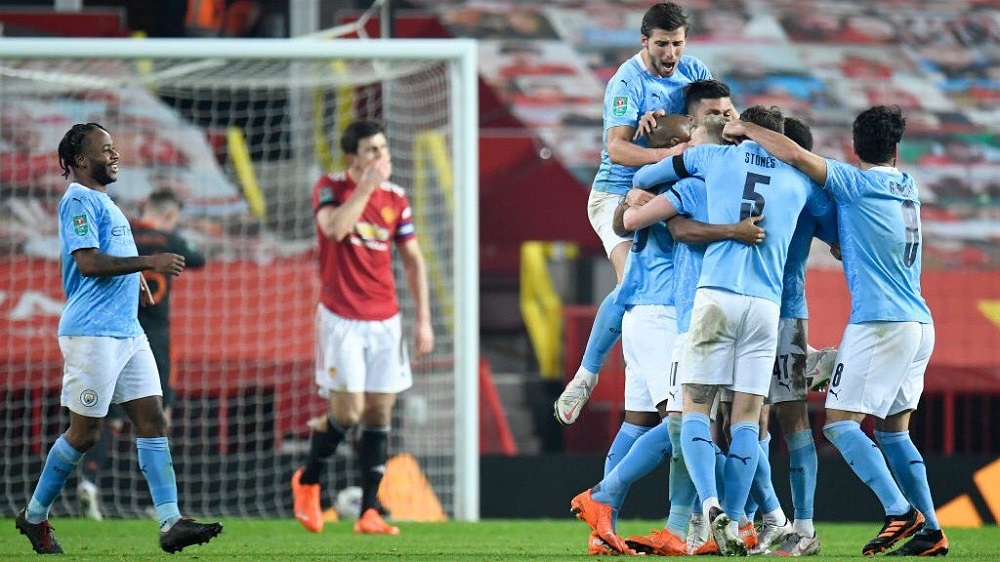 Manchester City won the Manchester Derby to reach the Carabao Cup final and will now be facing Tottenham.

Manchester City played against Manchester United in the Carabao Cup i.e. the EFL Cup semi-final. Both the teams had a chance to seal their place in the finals for the trophy. The winner of this match would face Tottenham who defeated Brentford a night before this derby to fix their spot in the final. It was a treat for the viewers as only a few days ago, the fans got to see the Manchester Derby in the Premier League. However, it ended in a goalless draw at Old Trafford. So, the supporters of both the clubs were equally excited for this draw. It was going to be a really interesting match as they would give their best to play the final against Tottenham.

The match began as Manchester City kicked off and they were maintaining possession of the ball. However, it didn’t take Manchester United much time to dispossess them. The Reds were pressing highly to steal the ball from Pep Guardiola’s men. Soon, Manchester United got the ball into the back of the net. But, the goal was ruled out as the linesman indicated Rashford offside during the goal. As a result, the score was tied at 0-0 once again.

However, soon even Manchester City found the back of the net after a tap-in from Gundogan. But, even his goal was ruled out as offside by the linesman at the other end. After that, Foden’s goal was also ruled out as he was offside during the buildup of the play. So, both the teams continued trying to create attempts and were getting some really good chances but they were unable to convert those. As a result, the score at the end of the first half was 0-0.

The second half began and now both the teams were desperately looking for a goal. Consequently, just 5 minutes into the second half, Manchester City found the back of the net. Stones got the ball into the goal past Henderson after a slight touch from his waist/thigh. However, that was not it as in the 83rd minute City found the back of the net once again. Fernandinho smashed the ball into the bottom right corner of the goal with a brilliant volley. Unfortunately for Manchester United, they were unable to score an equalizer or turn the tables. So, Manchester City had defeated Manchester United to go through to the final of the EFL Cup.

Manchester City will now be facing Tottenham in the final of the Carabao Cup i.e. the EFL Cup. It’ll surely be interesting to see Jose Mourinho and Pep Guardiola go up against each other once again. The two managers have a classic old rivalry. Apart from this, it’ll be exciting to see whether Mourinho can guide Tottenham to glory. As a result, it is going to be a really interesting and thrilling game. So, brace yourselves as Manchester City and Tottenham will be going up against each other on 25th April at the Wembley Stadium.

The 2020/21 Carabao Cup Final is confirmed.@ManCity and @SpursOfficial, we'll see you at Wembley! #EFL | #CarabaoCup pic.twitter.com/JwT2UVYoMa