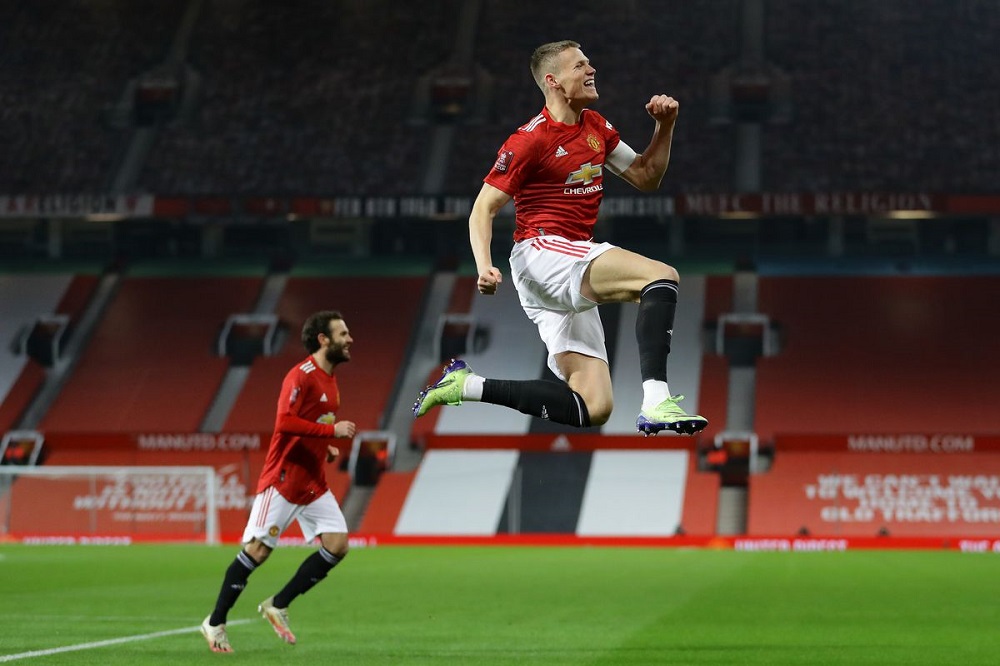 Manchester United defeated Watford to go through to the Round 5 of the FA Cup.

Manchester United locked heads with Watford in the 3rd round of the FA Cup. It was going to be a really interesting game as Ole Gunnar Solskjaer had decided to give youngsters a chance. As a result, the senior players would get some rest before the upcoming league games. An early headed goal from Scott McTominay capped an excellent individual performance that put Manchester United through. They moved on to the fourth round of the FA Cup. They had managed to defeat Watford 1-0 at Old Trafford on Saturday. It was an alluring game as both the teams were facing each other for qualifying for the fourth round. So, let us see what happened during this exciting clash.

The match began as Manchester United kicked off and the Red Devils keeping up with their standard possession game. It may have been their much-changed lineup but the team was all in tune right from the kickoff. In fact, they got off to an excellent start with skipper McTominay’s opener in the 5th minute. However, this didn’t dampen the Hornet side’s spirit and the Devils needed Axel Tuanzebe to hack the ball away from just off the goal line following Adam Masino’s shot.

The Telles’ corner route to goal paid off again in the 19th minute when his delivery was met by Eric Bailly. The United defender stole space for himself in the box but his header was glanced wide. Watford refused to lie down and Ismaila Sarr lobbed a high ball towards goal after breaking free from Telles.

The Devils cleared the ball and blocked several chances of the Hornets until the 32nd minute. Andrew Madley, the referee turned down the Hornets’ appeals for a handball by Bailly and then VAR endorsed the official’s decision. Manchester United got back into a smooth grove late in the half. An intricate and flowing move involving Mason Greenwood, the back healing Donny van de Beek and Juan Mata ended with the latter having his shot saved by Watford’s goalkeeper Bachmann.

However, the first half ended on a worrying note when the Devils’ defender Bailly was clattered by Dean Henderson as the keeper came out to punch a ball clear and inadvertently caught the Ivorian in the head with his knee. Consequently, the groggy defender was replaced by Harry Maguire as Bailly was escorted to the touchline by Manchester United’s medical staff.

Manchester United was below par in the second half initially. On the other hand, with the Hornets’ danger subsiding, the tie was treading water. In an attempt to inject some new life into the Red Devils’ side, Solskjaer brought on Marcus Rashford and Anthony Martial to replace James and Greenwood after the 68th minute.

However, in the 72nd minute, Watford won themselves a freekick. Ken Sema, their substitute player almost curled it into the goal but went a little wide. The ball went floating just over the far post. Anyways, Henderson did his job brilliantly as he watched it to safety.

Not a bad night's work for @McTominay10! 💪#MUFC #FACup

However, opportunities were few. The Red Devils struggled to find the top gear on a cold night. Both, Harry Maguire’s header or Rashford’s shot failed to give them another goal but they surely tested the Hornets keeper Bachmann late in the game. Anyhow, in the end, the Red Devils saw out the tie and made it through to the next round.

Manchester United had won the game against Watford after struggling a bit but their best players were not there. Consequently, just going through to the next stage was also enough for now. Anyhow, they will now be preparing for their upcoming league against Burnley which is on 13th January at the Turf Moor.