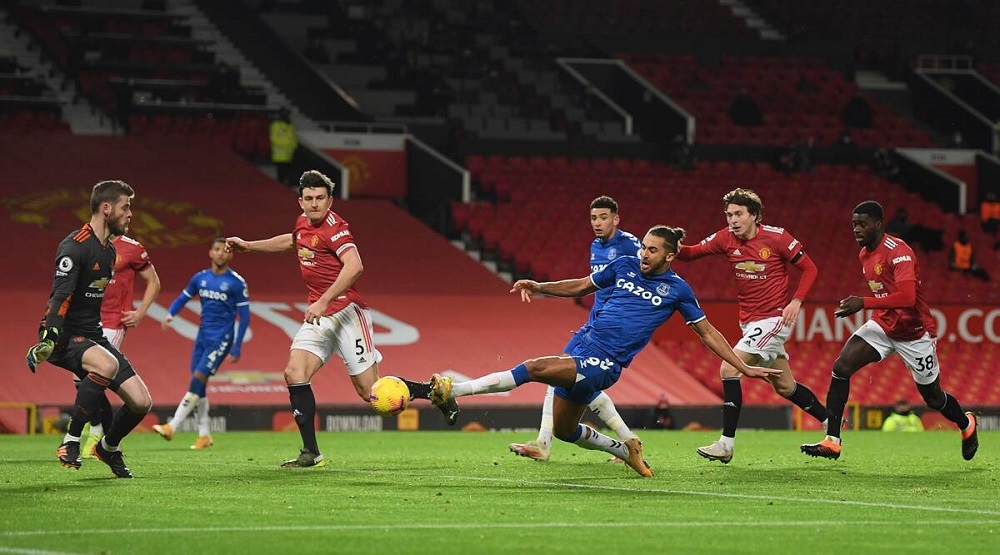 Manchester United dropped 2 points as Everton salvaged a late draw with a goal from Calvert-Lewin.

Manchester United hosted Everton at Old Trafford to play their 23rd fixture of the Premier League. They were coming fresh off the back after their 9-0 demolition of 9-man Southampton in midweek. The Red Devils’ attention turned to Everton, who was currently 7th in the PL points table. Carlo Ancelotti’s side also impressed during the week, holding off a strong second-half performance from Leeds United to secure a 2-1 win at Elland Road. Ole Gunnar Solskjaer made one alteration to his starting 11 that thrashed Southampton with Pogba replacing Fred. On the other hand, Ancelotti opted for three changes to his side which defeated Leeds United last time out. At the back, Keane replaced Mina and in the attack, Davies and Rodriguez came in for Sigurdsson and Iwobi.

Everton were looking for five win consecutive away league games for the first time since April 1970. On the contrary, Manchester United had lost only one of their last 27 home Premier League games against Everton. Since a run of six PL matches without a win at Old Trafford, United had won 5 of their last 7 home games in the league scoring 20 goals and conceding just 5. Looking at the stats, the fixture seemed to be really thrilling and the fans were really excited about it.

The match began as Everton kicked off but it was Manchester United who was dominating the possession. Wan-Bissaka hesitated before playing a ball to Greenwood but later crossed towards the far post then got headed away by Holgate. The loose ball fell to Cavani and his shot got deflected behind for the first corner of the game. The Toffees dealt with the resulting corner with relative ease as Godfrey steered the corner away at the near post. The visitors regained possession further up the pitch, where Richarlison had a quick disagreement with McTominay over a throw-in. However, the play resumed soon with Digne finding Doucoure. As the game approached the 20th minute, Ancelotti’s men made a better start to this fixture.

Solskjaer’s side had offered little upfront as of yet which came as a surprise, given their 9-0 crush of Southampton in midweek. In the 24th minute of the game, Rashford drifted out to the right-hand side taking his time to get his head up and cross towards the back post. Cavani was alert to this chance and was ghosting in behind Keane. He headed the ball past Olsen from inside the 6-yard area. Cavani’s opener had settled the Red Devils down as they were stroking the ball about with real authority and looked to attack at every opportunity they could.

On one occasion, McTominay found himself inside the right-hand channel and crossed towards the center of goal, where Olsen claimed the Scottish midfielder’s cross with ease. Unfortunately for the Red Devils, Paul Pogba was struggling after playing a short pass forward. Consequently, it was the end of the game for the midfielder as he was replaced by Fred in the 39th minute.

At the end of the first half, Fernandes dummied a pass for Wan-Bissaka and then received possession to the right of the area. The Portuguese midfielder was under no pressure and curled a right-footed effort over Olsen and into the top left corner and made it 2-0 for the hosts. The visitors almost made the score 2-1 as Calvert-Lewin beat the offside trap to latch onto Holgate’s pass. The former raced in behind the hosts’ defense to go one-on-one with De Gea. The English forward had just the goalkeeper to beat but managed to pull his left-footed effort agonizingly wide of the goal to the right. With that, the first half came to an end as the Red Devils were leading with a scoreline of 2-0.

The key moments from Saturday's game 🎥

The second half began as Everton got their first goal of the match in the 49th minute. Calvert-Lewin ran behind the hosts’ defense after Davis played a through ball to him. The English forward attempted to poke a left-footed effort across goal. De Gea parried into the path of Doucoure, who converted with the simplest tap-in inside the 6-yard area. Consequently, Everton scored their equalizer in the 52nd minute of the game as the Toffees immediately grabbed another through Rodriguez. Doucoure picked up the ball to the right of goal firing into the Colombian who drilled a left-footed effort into the bottom right corner from the edge of the area. That was a great response from Ancelotti’s men after the half time.

The visitors punished the hosts for their second half laziness. Solskjaer’s men faced the task of regaining their lead and starting all over again. A frantic start to the second half quietened down gradually with the hosts happy to take a while over a free kick on the right. Fernandes took the set-piece but Everton turned behind his delivery for a corner to the right of goal. The visitors pressed high with real intent. However, the home side played through the likes of Calvert-Lewin and Richarlison with relative ease.

Finally, McTominay made it 3-2 for Manchester United in the 70th minute. Shaw took a freekick from the left-hand touchline to deliver an outswing cross towards the penalty spot. McTominay managed to get in front of his man and flicked a header towards the far corner. The ball went past Olsen to help Manchester United regain their lead. The visitors were pressing as high up the pitch as possible. That forced the home side into playing a little bit longer than usual.

The Red Devils played aimlessly long again, conceding possession. They appeared content to sit deeper and soak up the pressure in an attempt to secure the three points. However, in the injury time, the visitors got their equalizer. There was a VAR check for handball and offside before confirming the goal. Digne swung in a freekick from the left-hand side towards the area. The cross flicked off the head of Keane and came into the path of Calvert-Lewin. The striker took a touch with his knee before poking the ball past De Gea into the back of the net.

With that, the game came to an end as Everton had managed to draw against the Red Devils in the final minutes. The high scoring game ended with a scoreline of 3-3. The 1 point that the Toffees won took them up to the 6th position in the points table. They are just three points behind fourth-placed Liverpool with a game in hand now. On the other hand, Manchester United was frustrated as they threw away the game so late. Even though they maintained their 2nd place, they are now 2 points behind Manchester City who still have 2 games in hand. Anyhow, both the teams will be preparing for their upcoming games in the FA Cup now. Ancelotti’s men will be locking heads with Tottenham whereas Solskjaer’s side will be traveling to West Ham. 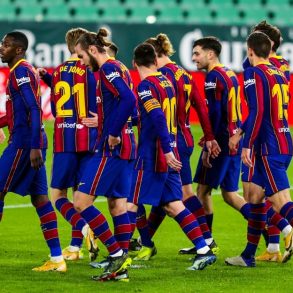