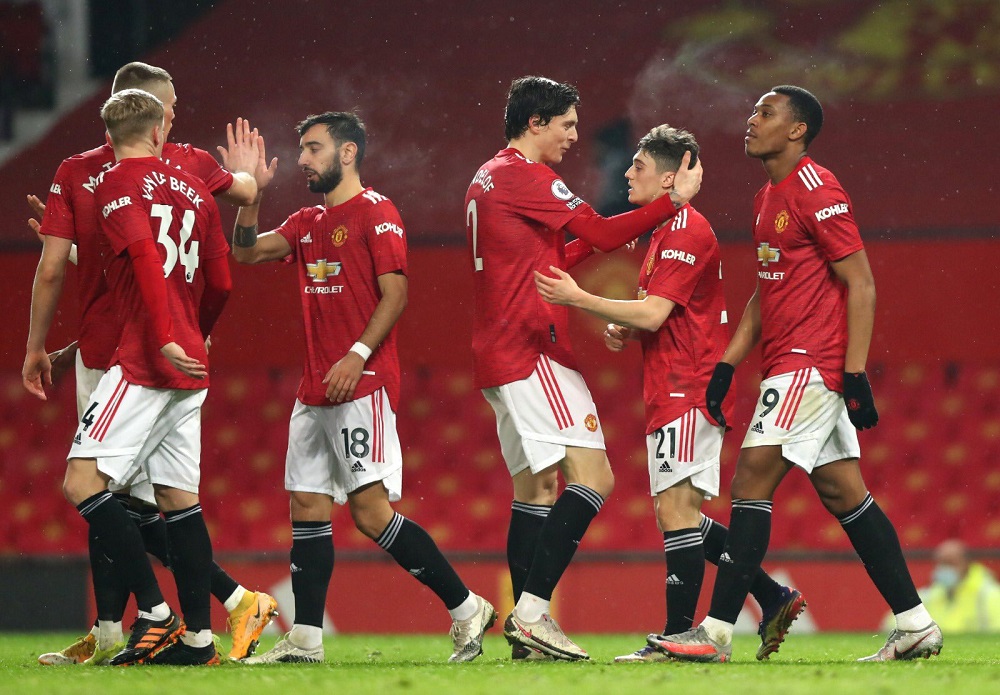 Manchester United hosted Southampton to play their 22nd fixture of the Premier League at the Old Trafford. The Red Devils recently led the way at the top of the division, but after one win in their last four top-flight matches, most recently playing out a goalless draw away at Arsenal had seen them slip three points behind the current leaders i.e. Manchester City who had a game in hand. Southampton headed into this match on the back of three successive league defeats including a 1-0 home at the hands of Aston Villa last time out. Ralph Hasenhuttl’s men had slipped down the division but they could move into the top half with a victory today.

Manchester United showed one change from their stalemate at Arsenal three days ago, with Greenwood being brought into the side in place of Pogba. Hasenhuttl made four changes to Southampton’s starting line up following their Saturday’s 1-0 home loss to Aston Villa. Southampton could climb into the Top 10 with a victory. On the contrary, 3 points for the Red Devils could help them level with Manchester City at the summit. However, the latter would have played two games less. As a result, the game was going to be really interesting and exciting.

The first half began as Southampton kicked off on the referee’s whistle. Jankewitz, who made his first Premier League start was sent off in the 2nd minute itself after he caught McTominay on the thigh with a horrific challenge. Southampton’s task was always difficult and it became a lot harder following that early dismissal. After Jankewitz’s suspension, the visitors were sitting deep as expected with 10 men and were doing well to keep United’s attacking players quiet.

In the 18th minute of the game, the host’s full-backs combined as Shaw sent a cross from the left for Wan-Bissaka to fire past McCarthy with a first-time finish near the back post. It was poor defending from Southampton but was nicely worked from the Red Devils.

Consequently, the second goal was scored in the 25th minute of the game. Maguire played a ball long and Greenwood slipped in down the left. The youngster picked out Rashford near the penalty spot to guide a shot past McCarthy. The goal from Rashford ended his goal-drought of six Premier League games.

In the 34th minute of the game, the score was 3-0 as Jan Bednarek scored an own goal. Rashford fizzed a cross in from the right and Bednarek wary of Fred positioned behind him, stuck out a leg. Unfortunately, he diverted the ball past his own goalkeeper tripling the hosts’ lead.

Again, Manchester United was not showing any mercy on the visitors as they got their 4th goal in the 39th minute. Shaw crossed from the left and an unmarked Cavani headed the ball away from McCarthy. With that, the score at the end of the first half was 4-0. The Red Devils had completely dominated over the 10-man Southampton team all over the first half.

🎥 Sit back, relax and enjoy all the best bits from a memorable night at Old Trafford.

The second half began as Solskjaer made a couple of changes at half time. Martial came in for Cavani and Donny van de Beek for Luke Shaw. The half had got off to a slow start. Southampton was desperately trying to keep hold of the ball but was not able to ask any questions of their opponents. However, the visitors almost scored their first goal in the 54th minute but after a VAR check, the referee disallowed the goal due to offside.

Just when Southampton was thinking of dominating the possession, Martial scored the 5th goal for Manchester United. His goal-drought also came to an end with that goal. The half time substitute used his chest to control a lofted pass from Fernandes away from Bednarek. Then, he thumped the ball past McCarthy into the roof of the net from a slight angle.

Just 2 minutes after the 5th goal, McTominay scored the 6th goal in the 71st minute. Greenwood was first denied by a good save from McCarthy but the latter couldn’t keep out McTominnay’s low drive from outside the box. The precision of the shot gave McCarthy no chance to save it. Manchester United had completely crumbled over Southampton in the last 10 minutes.

The Red Devils were not letting the tempo of the game drop. They were continuously pushing for more goals. However, in the 86th minute of the game, Southampton turned down to 9 men as Jan Bednarek was sent off after a pretty lengthy VAR check. On the contrary, the referee also awarded a penalty to Manchester United. Bruno Fernandes took it and the Portuguese midfielder made no mistake. He went the opposite way as McCarthy dived to his left.

Just before the injury time, Martial led the score to 8-0. Wan Bissaka’s cross from the right took a touch and landed in the path of Martial who remained calm and composed to fire the eighth goal for United. United was scoring from every attack and this was turning out to be a nightmare for the visitors.

Finally, Fernandes headed an angled pass into the path of James. The winger used the outside of his boot to flick the ball past McCarthy to make the score 9-0. With that, Southampton’s nightmare at Old Trafford ended in a scoreline of 9-0. The win lifted Manchester United to level points with the league leaders Manchester City in the points table. As for Southampton, they are now without a point in four Premier League matches and stay in 12th.