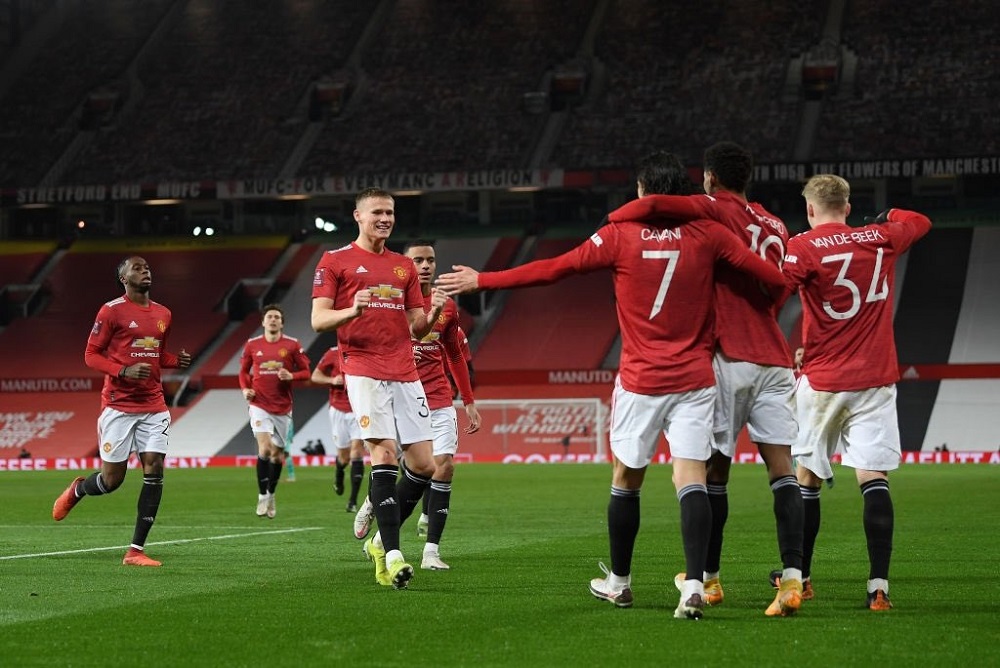 Manchester United stunned Liverpool with an outstanding comeback to move through to the 5th Round of the FA Cup.

Manchester United locked heads with Liverpool in the 4th Round of the FA Cup two days ago. It was going to be a really interesting fixture as the winner would proceed into the next round. It was also exciting as just 7 days ago in this North West Derby, the match ended in a disappointing goalless draw. Even though both the teams were happy with sharing a point each, it was surely a boring match for the fans. However, this fixture was going to be fascinating as it was a knockout match. As a result, at the end of the match, we would have at least one winner. The match was being held at Old Trafford so, the hosts i.e. Manchester United surely had an upper edge given their record against Liverpool at home.

The match began as Manchester United kicked off and they were playing aggressively from the beginning as they were trying to create chances. However, they went on creating chances testing the Liverpool defense and their goalkeeper Allison Becker. Anyhow, it was the Reds who got the first goal of the match in the 18th minute that came from Mohammed Salah. Firmino set up the Egyptian forward with a brilliant pass and Salah converted it easily by chipping it over Dean Henderson. As a result, Liverpool got an early lead. They had managed to put the hosts under pressure.

However, it didn’t take Manchester United much time to level the scores. Marcus Rashford played an excellent through ball to Greenwood from the left flank at the midfield towards the right edge of the box. Then, Greenwood brought it down brilliantly with his chest and smashed it past Allison Becker to score the equalizer. As a result, the Red Devils had managed to tie the match once again at 1-1 in just 8 minutes. After that, both the teams continued creating chances but neither of them was able to convert them. Consequently, the score at the end of the first half was 1-1.

The second half began and now Liverpool was trying to calmly build their play by maintaining possession. However, it was Manchester United who got into the lead. Marcus Rashford scored an excellent goal just 3 minutes into the second half. This time Greenwood played a through ball to the number 10 striker. Rashford then dashed with the ball and curled it into the right side of the goal. Allison managed to make a contact with the ball but failed to keep it out of the goal. Consequently, now Manchester United was leading with a score of 2-1.

However, it was just a matter of time before Liverpool got the equalizer. In the 58th minute, Milner took played a pass to Firmino who played it back into the former’s run. But, the midfielder took a dummy and left it for Salah who put it past Henderson to level the scores once again. So, the match was at an interesting note once again as both the teams were looking for a goal.

Both the teams got to creating chances once after the other but were not able to finish them off. Finally, in the 78th minute, Bruno Fernandes scored a freekick to seal the win for the Red Devils. Fabinho fouled Cavani just outside the box and won his side a freekick. Consequently, the Portuguese midfielder made full use of it. He curled it in beautifully into the right corner of the goal over Thiago’s head. After that, Liverpool tried their best to score an equalizer once again but failed to do so. With that, the referee whistled full-time as Manchester United had defeated Liverpool by a score of 3-2.

The Red Devils had knocked the Reds out of the 4th Round of the FA Cup to move on to the next round. They will now be facing West Ham in the 5th Round on 11th February. Anyhow, Liverpool will be getting over this defeat as soon as possible as both the teams now need to prepare for their upcoming league games. Manchester United will be going up against Sheffield United whereas Liverpool will be locking heads with Tottenham.