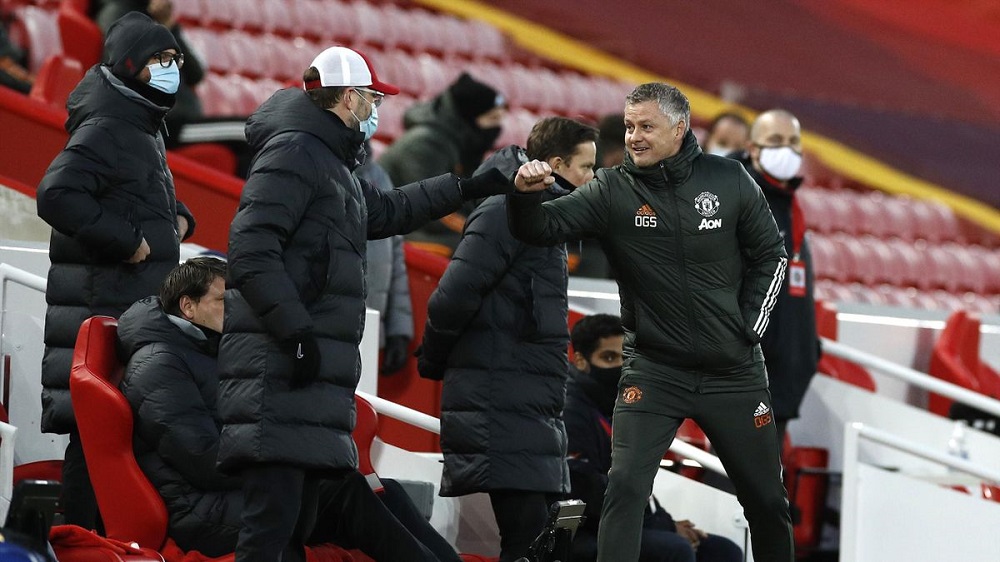 Manchester United vs Liverpool ended in a goalless draw as the Reds salvaged a point at the Anfield against the Red Devils.

Liverpool hosted Manchester United at Anfield to play their 18th match of the Premier League. Liverpool made six changes to their side from the FA Cup triumph over Aston Villa. Henderson, Allison, Alexander-Arnold, Robertson, Shaqiri, and Thiago were the changes for the Reds. On the other hand, Manchester United had made three changes to their side from their 1-0 victory over Burnley. Lindelöf, Pogba, and Martial were coming for the Red Devils. Liverpool had won their last two home Premier League games against Manchester United, last winning three in a row in 2011. At Anfield, the Red Devils didn’t have as many as 10 shots since September 2013 under David Moyes. Looking at the stats, the match was surely going to be really fascinating.

The game began as both the teams were giving their best to keep the possession to themselves. However, Liverpool didn’t hold back the attacks and kept disturbing the Red Devil’s defense and the goalkeeper. In the 17th minute, Shaqiri sent a fine through-ball for Mane to chase in the United box. He worked an offload back to Firmino in space on the edge of the box but the latter skewed his left-footed strike wide of the left post. Liverpool kept the pressure on with all the players charging into the attack to make a difference.

Manchester United got their grove back when Bruno Fernandes bent his freekick over the wall towards the top left corner. Allison scrambled across his goal line and watched the ball travel just wide of the target. It was a really close effort from the Portuguese but unluckily, his side didn’t get a goal. De Gea saved the shot taken from Firmino who met a cross from Salah in the 35th minute of the game. Both the teams were looking frustrated and hungry for goals as none of them had been able to make a difference in the first half. However, the half ended all square at a score of 0-0. Consequently, both the teams needed to up their game in the second half.

The second half began and now Manchester United was looking different as they were dominating the possession. In the 53rd minute, Martial sent a low pass into the left inside channel for Fernandes who took a first-time shot from his left foot. Fabinho tracked his movements all the way and slid in to block his attempt behind for a corner. After that, Maguire made an excellent intervention by blocking Firmino’s effort with an outstretched boot in the 59th minute of the game. Cavani replaced Martial in the final third for the Red Devils.

Firmino worked a pass into the feet of Salah inside the box. He tried to force a strike through a crowd of defenders but the eventual strike from the Egyptian traveled wide of the right post after deflecting off Maguire. In the 65th minute, Thiago lost out to Fred who fed Fernandes in the final third. The Portuguese lined up a strike at the goal that bounced before Allison. However, the Liverpool goalkeeper made a comfortable save. Rashford lined up the strike from the resulting free-kick only to hammer his effort straight into the wall.

De Gea in the 78th minute made a really good save. Thiago dropped his shoulder to weave his way around Fred. He launched a powerful right-footed strike towards the target that De Gea beat from goal. Finally, with 20 minutes left for the end of the second half and there was no breakthrough for both the teams. Allison saved the day for Liverpool after making an extraordinary save in the 83rd min. Wan-Bissaka cut a low ball back into Pogba who was in the box. The Frenchman took a good touch before firing the ball at the goal. His effort had power but it was straight at Allison who palmed it wide of the left post.

Fernandes was not happy when he was replaced by Greenwood in the 89th minute. Both the teams had tried their best to make difference but none of them succeeded. The second half ended as the clash between the Top 2 teams had ended in a goalless draw. The draw allowed the Red Devils to remain at the top of the Premier League points table. Anyhow, both the teams will now be getting ready for their upcoming games. Liverpool will be facing Burnley next on Friday i.e. 22/01 whereas Manchester United will face Fulham on Thursday i.e. 21/01.