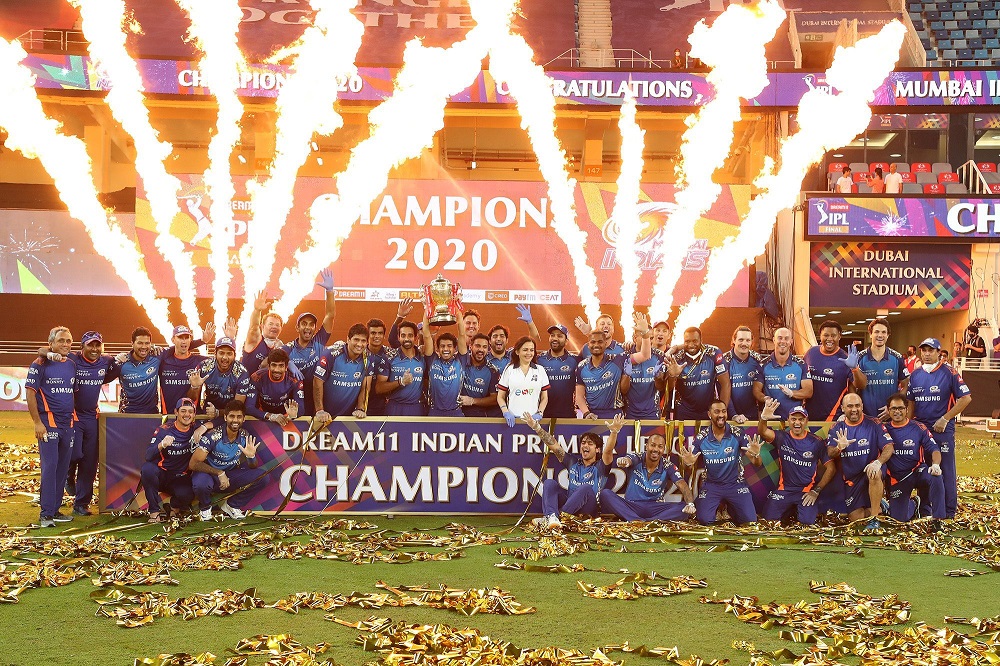 A still of the defending champions Mumbai Indians lifting the IPL 2020 trophy which is their 5th league title.

IPL 2020 has been nothing short of a thrilling roller coaster ride. It started off in UAE after a lot of postponement due to the ongoing pandemic. However, once it began, people forgot about everything and sat glued to the league for entertainment. However, all good things come to an end and just like that, now it was time for IPL 2020 to end. It was time for the finals of IPL 2020 as the defending champions Mumbai Indians were all set to face Delhi Capitals who were making their maiden IPL final appearance. As a result, it was going to be an interesting fixture.

MI were the obvious favorites as they had a huge fan following due to their players and also they had defeated DC 3 times in this season itself, so even DC must have been under great pressure. It was going to be a classic clash as DC had MI’s former coach Ricky Ponting whereas MI had DC’s former fast bowler Trent Boult. The match was also special as Rohit Sharma was playing his 200th IPL match. On the other hand, it was DC and their young skipper Shreyas Iyer’s first IPL final. As a result, everyone was excited about this fixture as both the teams were going to battle it out for the IPL 2020 trophy.

The match began as DC won the toss and opted to bat first. However, this decision did not work out in their favor as, on the first ball of the first over, their opener Marcus Stoinis (10 in 1) lost his wicket to Trent Boult. Just two overs later, Boult struck again as he dismissed Ajinkya Rahane (2 in 4) who had come to replace Stoinis. As a result, Shreyas Iyer came to support Shikhar Dhawan from the other end of the crease. The duo had just started to settle in when Dhawan (15 in 13) also got out in the 4th over. So, now all hopes were rested on the DC skipper Shreyas Iyer and Rishabh Pant. The duo managed to survive the powerplay as they got 41 runs from it after losing 3 wickets.

Both of them played a calm and composed innings as they did not go for big shots and were defending their wicket very well. They got a partnership of 96 runs in just 69 balls before Pant (56 in 38) got out. So, Shimron Hetmyer (5 in 5) came to the crease but soon got out in the 18th over. As a result, Axar Patel came in at 7. However, after hitting a boundary, Axar (9 in 9) got dismissed in the final (20th) over. In the same over, Rabada (0 in 0) got run-out on the last ball as MI had restricted DC to a total of 156-7. Even then, the DC skipper Shreyas Iyer (65* in 50) had played an extra-ordinary innings under so much pressure as he guided his team to a 150+ total after losing 3 wickets in the first 4 overs itself.

Rohit Sharma and Quinton de Kock, the standard opening pair of Mumbai Indians opened the innings for their team. They got their team to a great start as they were thrashing the DC bowlers. However, in the 5th over, De Kock (20 in 12) got dismissed. As a result, Suryakumar Yadav came in at 3. Rohit and Yadav were playing at a normal pace as they did not want to lose any wicket. However, in the 11th over, Yadav (19 in 20) got run-out after Rohit tried to take a run when the ball went directly into the fielder’s hands. Suryakumar Yadav sacrificed his wicket for Rohit as he knew his skipper was in a good form and was set at the crease.

As a result, Ishan Kishan came to support Rohit Sharma on the crease now. Both of them started hammering the DC bowlers as now they wanted to just finish off the chase. However, in the 17th over, Rohit (68 in 51) got out. So, Keiron Pollard came in at 5. But, he (Pollard- 9 in 4) got out in the very next over i.e. the 18th over. After Pollard’s dismissal, Hardik Pandya (3 in 5) came to the crease. However, even he wasn’t able to help MI reach the target as he got dismissed in the 19th over. So, Krunal Pandya (1* in 1) came in at 7, and with Ishan Kishan (33* in 19), he ended MI’s wait to help them win their 5th IPL trophy. They had defeated Delhi Capitals by 5 wickets to defend their title as the IPL 2020 champions.

Trent Boult won the Man of the Match award for his excellent 4-over spell. He took 3 crucial wickets after giving away 30 runs. The New-Zealand pacer had put up an amazing display of his performance in this IPL. He got early wickets for his team in almost every match. Talking about the trophy, MI lifted the IPL 2020 trophy to defend its title of the IPL 2019 champions. They were lifting their 5th title and had ended their streak of lifting the trophy in every alternate year.

With this, the beautiful journey of IPL 2020 came to an end. After 2 glorious months of cricket, the tournament came to an end. However, you do not need to worry as the next season will be returning in April 2021. So, sit back and relax until the next season returns and let us know your thoughts in the comments section on Mumbai Indians lifting its 5th IPL title this season.