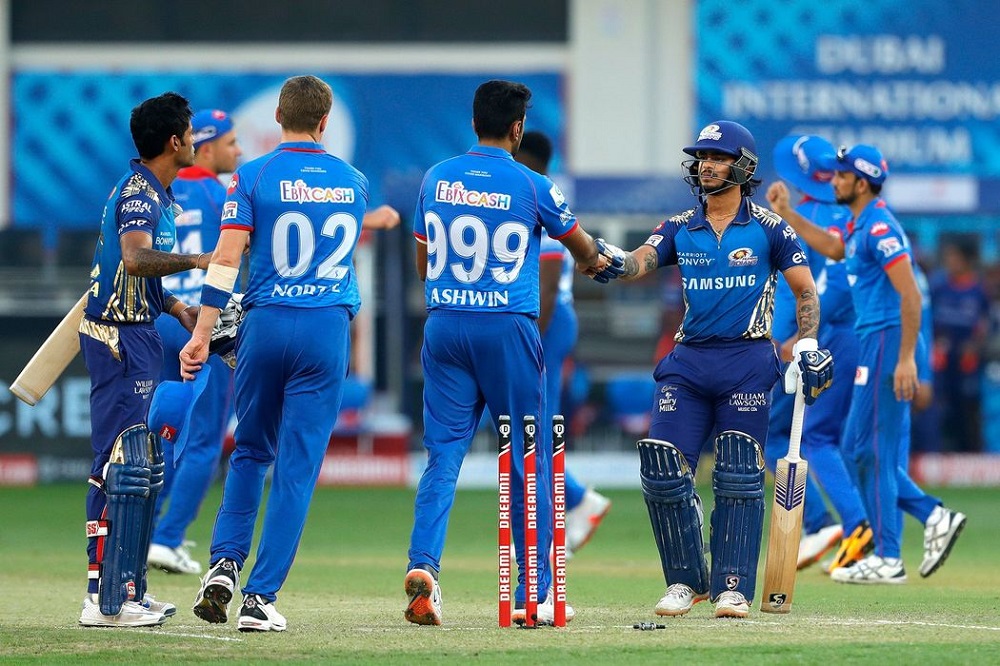 It is not at all shocking that Mumbai Indians are having yet another brilliant season in IPL 2020. They lost their first match but soon gained their form as they defeated every team that they came in their way. Currently, they were sitting at the top of the points table with 16 points and have qualified for the playoffs. Now, they were going to lock horns with Delhi Capitals to seal their position in the Top 2 of the points table. Delhi Capitals had also been in an amazing form this season but seemed to have lost that in the past few matches. needed a win to confirm their qualification for the playoffs. So, it was definitely going to be an interesting fixture as both the teams had had a great season.

Mumbai Indians won the toss and their skipper Keiron Pollard opted to bowl first. Pollard wanted his bowlers to restrict the DC batsmen to a low total and that is exactly what they did. In the first over itself, Boult dismissed Shikhar Dhawan (0 in 2) creating pressure on DC. In his second and the match’s third over, Boult struck again as he dismissed Prithvi Shaw (10 in 11). As a result, Shreyas Iyer and Rishabh Pant came to the crease. The two took it slowly and were playing defensively as they did not want to lose any more wickets. They were able to get only 22 runs from the powerplay. Finally, in the 10th over, Rahul Chahar got Mumbai Indians the breakthrough they needed as he dismissed the DC captain Iyer (25 in 29).

In the very next over, Stoinis (2 in 3) who had just come to the crease also got out. In the very same over, Bumrah dismissed Pant (21 in 24) to completely collapse the DC batting line-up. After that, the DC batsmen just came and got out as none of them was able to settle or hit big for their team. Harshal Patel (5 in 9) got out in the 14th over whereas Hetmyer (11 in 13) got out in the 16th over. After them, Ashwin (12 in 9) and Rabada (12 in 7) also got dismissed in the 19th and 20th over respectively. Praveen Dubey also chipped in 7* in 13 balls as DC was able to get a total of only 110 runs on the scoreboard. This was one of their lowest batting totals of IPL 2020. The MI bowlers had completely outplayed them.

Mumbai Indians needed 111 runs in 20 overs which was just a really easy chase for them. Ishan Kishan and Quinton de Kock came to open for MI as usual. De Kock and Kishan had built a good partnership of 68 runs in 62 balls. However, in the 11th over, Anrich Nortje dismissed the former (De Kock- 26 in 28). After that, Suryakumar Yadav came to the crease. However, the latter did not bat much as he scored only 12* runs in 11 balls. Ishan Kishan, on the other hand, smashed 72 runs in just 47 balls to lead MI to yet another victory. Mumbai Indians had won their 9th game of IPL 2020 to reach a total of 18 points on the points table.

Why is @ishankishan51 called a pocket dynamite? What is the formula behind his purple patch? Jayant Yadav chats up with him and finds out more…..

Ishan Kishan won the Man of the Match award for his match-winning knock of 72* runs off just 47 balls. The 22-year old had guided his team to a win once again with a brilliant innings. With this win, Mumbai Indians had confirmed their spot in Qualifier 1 of playoffs. It will be taking place on 5th November, 2020 in Dubai International Cricket Stadium. They will be facing RCB if RCB manages to win against SRH. Otherwise, MI will be up against the winner of the match between RCB and DC as the latter are both tied at 14 points until now. MI, on the other hand, will be facing SRH in their next fixture.