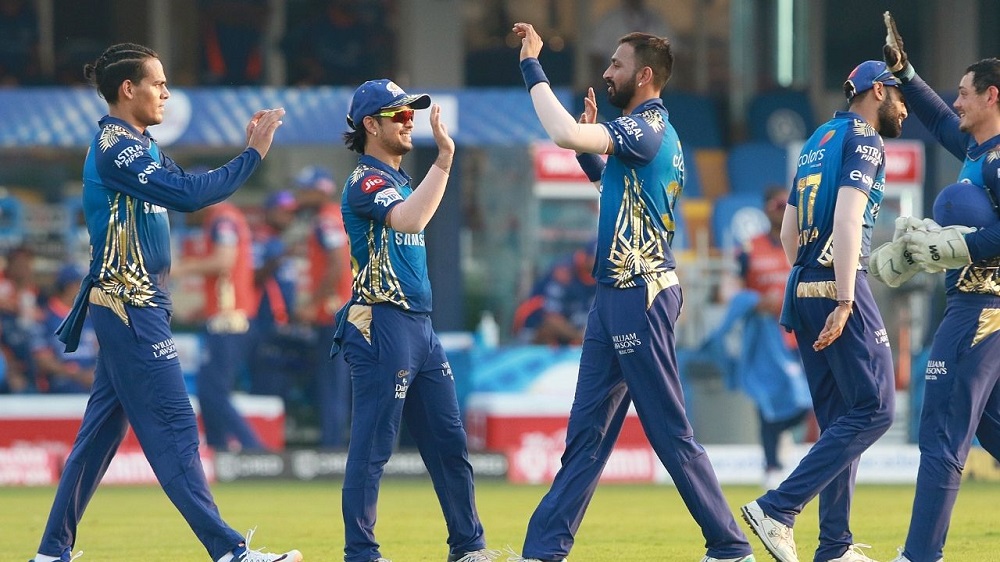 Mumbai Indians celebrate as they win 3rd match of the season.

It was the 17th match of IPL and the 5th match for Mumbai Indians. The Rohit-led MI was going to be up against Sunrisers Hyderabad. Both the teams had won 2/4 games till now and were looking forward to a win to move to the top of the points table. The match was in Sharjah, which has a small stadium with a short boundary. So, definitely, both the teams were looking forward to batting first. Luckily, Mumbai Indians won the toss, and Rohit Sharma opted to bat first. Sharma was confident after the previous match and wanted to put up a big target for Warner’s Hyderabad.

The match began as Rohit Sharma, and Quinton de Kock came to open the innings for Mumbai Indians. In the first over, Sandeep Sharma caused trouble to Rohit Sharma. However, on the 4th ball, Rohit smashed a six on the leg side. Soon enough, Sandeep took his revenge as he dismissed Rohit (6 in 5) on the 5th ball. Consequently, Suryakumar Yadav came to crease to support De Kock. The two were pairing up excellently until the 6th when Yadav (27 in 18) got out. But, there was no problem as Mumbai still had many batsmen left. So, Ishan Kishan came in at 4. Both Ishan and De Kock were left-handed batsmen and were causing a lot of trouble to the Sunrisers Hyderabad bowlers. So, Warner asked Williamson to come and bowl as he wanted to surprise the duo batting.

However, that backfired as Ishan hit 17 runs in Williamson’s 2nd over. But finally, Rashid Khan was able to get a breakthrough as he dismissed De Kock (67 in 39) on the 14th. To fill in for De Kock, Hardik Pandya came to the crease. He seemed determined to smash the bowlers now as he knew only six overs were left. However, in the 15th over, Ishan Kishan (31 in 23) was sent back to the pavilion. Due to that, Pollard (25 in 13) came to bat, which made it more dangerous for the SRH bowlers. Hardik (28 in 19) was hitting sixes and fours continuously until the 20th over when Kaul dismissed him. However, Hardik’s dismissal unleashed the beast within Krunal Pandya as he hit 20 runs off the last four balls of Kaul’s over.

You have four balls to face in the last over and what do you do? Ask @krunalpandya24 who had the answers. BOOM – 6,4,4,6https://t.co/IId5EJZaJJ #Dream11IPL #MIvSRH pic.twitter.com/TMtUxaNEpS

Mumbai Indians had put up a whopping target of 209 runs for Sunrisers Hyderabad. Consequently, David Warner and Jonny Bairstow were opening for Sunrisers Hyderabad. They were playing really well until the 5th over when Boult sent Bairstow (25 in 15) back to the pavilion. Then came Manish Pandey, who smashed 30 runs in just 19 balls before getting out in the 10th over. Just two overs after Pandey’s dismissal, Williamson (3 in 5) got out in the 13th over. Then came Priyam Garg (8 in 7), and a lot was expected from the youngster. However, he failed to deliver as he also got dismissed in the 15th over. In the very next over, Pattinson sent Warner (60 in 44) back to the pavilion.

After that, all the hopes that SRH had were crushed. Abhishek Sharma (10 in 13) and Abdul Samad (20 in 9) were on the crease, but both of them got out in the 19th over. After their dismissal came Sandeep Sharma and Rashid Khan, but they were able to get the team total to only 174-8. With that, Sunrisers Hyderabad lost to Mumbai Indians by 34 runs. It was their third loss of the season. Just when they had thought they were getting back on track, Mumbai Indians defeated them.

First up, is Trent Boult who was adjudged MoM for his brilliant bowling spell and figures of 2/28.#MIvSRH pic.twitter.com/juc4dXx5Or

Trent Boult became the Man of the Match for his excellent 4-over spell of 28 runs and two wickets. He made an exceptional display as he dismissed Hyderabad’s two key players: Jonny Bairstow and Kane Williamson. SRH were completely disappointed by their performance but will be preparing themselves for their clash against Kings XI Punjab now. On the other hand, Mumbai Indians will be bracing themselves as they lock horns with Rajasthan Royals. For now, they are on the top of the points table and will surely be looking forward to keeping it just like that.